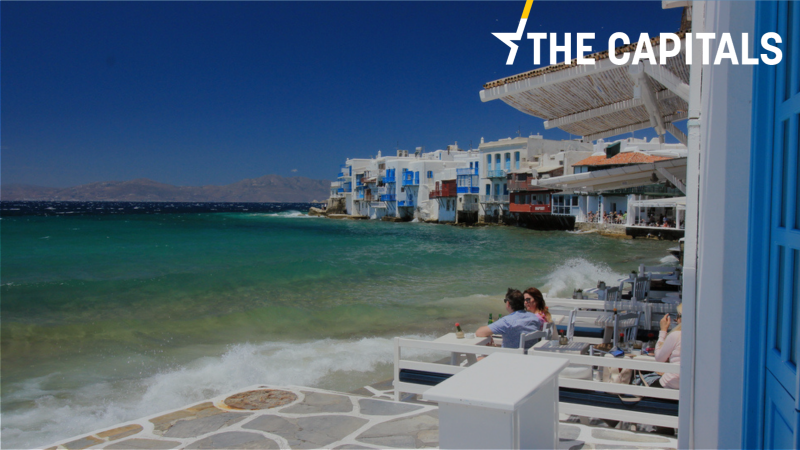 A one-week local lockdown was initially decided about the island of Mykonos, where music in bars was banned as well as a curfew was imposed after midnight. [Shutterstock/Marco von Rehbinder]

Before you start reading today’s edition of the Capitals, feel free to have a look at the article “Experts: Deadly floods made worse by misguided farming practices“, by EURACTIV Germany’s Julia Dahm.

Editor’s take: Will Azerbaijan recognise ‘Northern Cyprus’? Press reports in Turkey recently suggested that Azerbaijan would recognise the occupied by Turkey territory in northern Cyprus. EURACTIV asked Azerbaijan’s embassy in Brussels if this is the case. This is what they replied.

We are very happy to announce a partnership with Europe Elects, another milestone on EURACTIV’s journey that will help you make sense of complex election issues across Europe.

On a different note, this is the last edition of the Capitals before the summer break. The  ‘European news you deserve to read’ will be back with you on 30 August.

In the meantime, we want to thank you for being with us so far and wish you an enjoyable summer.

Portuguese bars and nightclubs will remain closed until October, after which they can reopen for customers presenting a COVID-19 vaccination certificate or equivalent, Prime Minister Antonio Costa said on Thursday. Meanwhile in Greece, several islands face the risk of local lockdowns as the resurgence of COVID-19 cases has caused the government headaches. Read more.

Irish watchdog given one month to finalise Whatsapp privacy ruling. Facebook-owned messaging platform WhatsApp will learn within a month the extent of a fine by Ireland’s privacy watchdog over an alleged breach of the EU privacy framework following a binding decision by the bloc’s data protection board. More.

Lithuania launches probe into cyberattacks amid migration crisis. Lithuania’s Cybersecurity Centre has launched an investigation into alleged disinformation about where migrants might be accommodated, which according to Interior Minister Agnė Bilotaitė, has stoked fears among local communities. Read more.

Spain leads vaccination campaign, economy growth forecast. In Spain, more than 26 million people or 55% of the population, are now fully vaccinated against COVID-19, positioning the country ahead of some of the world’s leading economies such as the US, Germany and France. More.

Basque country leads way in implementing global development goals. While the sustainable development agenda took a back seat during the pandemic, one region in Spain pressed ahead with creating an ‘ecosystem’ for reaching global goals locally. To take a closer look, EURACTIV spoke with Marta Marín, delegate of the Basque Country’s mission to the EU.

Italian prisons face overcrowding, suicide problems. Italian prisons had a “real crowding rate” of 113% in June 2021, with 53,637 people occupying the approximately 47,000 places actually available, according to the annual report of prisoners’ rights association Antigone presented on Thursday. The suicide count has also shot up. Read more.

Italy reaches accord on contested justice reform. The Italian government has reached an accord over a contested reform of the judicial system, a government spokesperson said on Thursday (29 July), apparently putting an end to weeks of friction in Mario Draghi multi-party coalition. Read the full story.

Slovak far-right backs anti-vaccination campaign. Hundreds of people came to Slovakia’s Presidential Palace to protest against the country’s vaccination campaign, COVID-19 restrictions, the government and the president, as well as the recently adopted law that favours those vaccinated. Read more.

Prague streets make way for ‘vaccine bus’. Citizens of Prague and visitors to the Czech capital can now be vaccinated against COVID-19 without prior registration in a mobile vaccination centre known as the “vaccine bus” set up by the Prague City Hall. Read more.

Bulgaria risks third parliamentary elections in a year. Bulgaria’s anti-establishment party “There is such a people” (ITN), which is currently leading negotiations with other parties to form a government, has accused partner parties of having tried to influence the future government without having the right to do so, which according to parliamentary group leader Toshko Yordano, could lead to new elections – the third within a year. Read more.

Romania’s recovery plan drama continues. As Brussels goes into summer recess, the topic of Romania’s recovery and resilience plan is far from being settled as the Commission is still seeking clarification on a series of important issues, media reported. Read more.

World Jewish Congress: Denying Srebrenica genocide resembles Nazi propaganda. Bosnian Serb propaganda that downlplays the extent of the crimes committed during the war in Bosnia and Herzegovina (BiH) in the 1990s, including the genocide against Bosniaks in Srebrenica, is reminiscent of Nazi antisemitism, Menachem Rosensaft of the World Jewish Congress (WJC) warned on Thursday. Read more.

“The Macedonian language is unique and different from other languages. The Macedonian nation has a culture and a history it can be proud of and we will not let anyone dispute that. Long live Macedonia,” said VMRO-DPMNE’s vice-president, Aleksandar Nikoloski as he announced the outcome of the vote.  (Željko Trkanjec | EURACTIV.hr)

“For the first time since 2016, and for the second time in history, June was a month with a surplus. This time, the surplus is structural and there was no extraordinary income, thus indicating the trend of radical recovery of state finances,” said Spajić.

According to the finance ministry, the budget deficit for the first six months of this year was reduced to €160.6 million or 3.5% of GDP, compared to a €3 million surplus in June. (Željko Trkanjec | EURACTIV.hr)