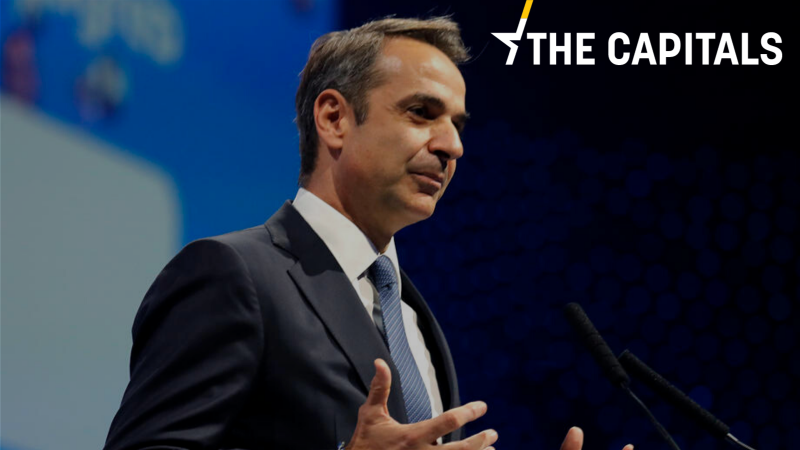 Speaking at the EU Council, Mitsotakis reportedly said the EU single market is not there only to serve free movement of goods but also the movement of people. [EPA/ANTONIO BAT]

Before you start reading today’s edition of the Capitals, feel free to have a look at the article “EU leaders agree plans for ‘unprecedented’ stimulus against pandemic” by Jorge Valero.

EMA warns about chloroquine’s side-effects. US President Donald Trump recently touted anti-malaria treatments hydroxychloroquine and chloroquine as potential remedies for COVID-19. However, the European Medicines Agency does not share the same view and warns about severe side-effects from these drugs.

“Chloroquine and hydroxychloroquine are known to potentially cause heart rhythm problems, and these could be exacerbated if treatment is combined with other medicines, such as the antibiotic azithromycin, that have similar effects on the heart,” EMA said in a statement.

“Recent studies have reported serious, in some cases fatal, heart rhythm problems with chloroquine or hydroxychloroquine, particularly when taken at high doses or in combination with the antibiotic azithromycin,” the EU drug agency added.

ATHENS. Greek Prime Minister Kyriakos Mitsotakis yesterday (23 April) called on the European Commission to come up with a plan to resume travel “as soon as possible”, according to Greek government sources.

Speaking at the EU Council, Mitsotakis reportedly said the EU single market is not there only to serve free movement of goods but also the movement of people.

“We need to reach common understanding as to movement of people,” he said, adding that backing tourism in Europe’s south is “demonstrable” support.

Contrary to her cautious approach in mid-April, European Commission President Ursula von der Leyen recently told Portugal’s SIC TV channel that she was positive about having a vacation this summer – in a “smart” way. For Greece, tourism accounts for around a fifth of its economy and more than a quarter of jobs.

Mitsotakis also backed the idea of a strong EU budget funded with a form of joint debt instrument. “It needs to have very long, if not perpetual maturities, to be front loaded, and more crucially, it needs to focus more on grants not loans.”

New aid package for workers, schools, and companies. Germany’s grand coalition of Christian Democrats (CDU/CSU) and Social Democrats (SPD) reached an agreement for an additional €10 billion aid package on Thursday (23 April). The funding will increase payments to workers in the country’s short-term work scheme, which hopes to incentivise companies to retain their employees during the economic downturn. The package also provides schools with an additional €500 million to speed up the transition to online learning. (Sarah Lawton | EURACTIV.de)

When will the lockdown end? Although France’s lockdown, which started on 16 March has spared 60,000 deaths according to a study underlining the positives of social-distancing since that day, many questions remain unanswered or unclear as France nears the end of confinement set for 11 May. EURACTIV France looks into why.

Relaxation, but only light? After the leak of the recommendations on the Belgian deconfinement measures, experts are predicting that many people could be disappointed by the exit strategy the National Security Council will announce later on Friday. Alexandra Brzozowski has the details.

Scotland sets out ‘phased’ end to lockdown. Scotland will have to learn to “live alongside” the coronavirus, with some social distancing measures remaining in place into next year, according to a 26-page report on plans to phase out the lockdown measures published on Thursday (23 April). EURACTIV’s Benjamin Fox takes a closer look.

New law to exclude persons from events. The governing coalition of Chancellor Sebastian Kurz’s conservative ÖVP and the Greens presented to the parliament amendments to the country’s pandemic law, which would exclude “certain groups of persons” from events. Philipp Grüll reports.

Investigation into possible ‘concentration camps’. Russia announced on Monday (20 April) that it will start an investigation into Finland’s actions in Karelia during the Continuation War. As an ally of Nazi Germany between 1941 and 1944 during the Second World War, Finland established several prison camps in the area now part of Russia. Pekka Vänttinen reports from Helsinki.

Flattening of the curve. As almost 90,000 COVID-19 patients have been discharged from hospital and new cases and deaths saw a decline, the curve of the pandemic has begun to flatten. Fernando Simón, director of the Health Ministry’s Emergency Coordination Center, said “the evolution is correct” and can already be thought of as a “transition”. Read more.

Celebrating the ‘Carnation Revolution’ from home. Portugal is to celebrate the 46th anniversary of 1974’s democratic revolution on Saturday (25 April) for the first time without street parties and with a smaller than usual solemn session in parliament because of the COVID-19 pandemic. The president of the 25 April Association and revolutionary leader, captain Vasco Lourenço, has asked the confined Portuguese to go to the windows when the parade goes through Avenida da Liberdade in Lisbon and sing ‘Grândola Vila Morena’.

Lourenço also requested Portuguese television and radio station to play the song at the same time.

The song has become a symbol of the revolution as it was broadcast on Portuguese radio on 25 April 1974 as a signal to start the revolution that overthrew the authoritarian government of Marcello Caetano. (José Pedro Santos, Lusa.pt)

Italy set for work, transport overhaul in phase 2. Italy is set to overhaul its working and transport norms to make sure it is still as safe as possible from the coronavirus even after phase two begins with the easing of lockdown restrictions on May 4. Read more on EURACTIV’s partner ANSA.

€7.8 billion in state aid. The European Commission has given its consent for Polish authorities to grant state aid to companies for the amount of €7.8 billion, as part of the government’s anti-crisis package for entrepreneurs. Micro-enterprises, small and medium-sized enterprises (SMEs), as well as large companies in difficulties will be able to benefit from direct grants, repayable advances, tax benefits and reliefs, tax deferrals or employee compensation payments. (Łukasz Gadzała | EURACTIV.pl)

Government’s COVID-19 measures deemed illegal. Prague’s Municipal Court on Thursday (23 April) cancelled a number of restrictive measures limiting movement and closing retail businesses because these restrictions had been introduced by the country’s health ministry. However, the court held that only the government and not a single ministry could impose such measures under the state of emergency rules. Prime Minister Andrej Babis’ cabinet has until Monday to adopt the measures again in line with the law. (Ondřej Plevák | EURACTIV.cz)

Domestic violence at record highs. Reported domestic violence cases reached record highs in March, as the monthly average was 50% higher than that of recent years, G7 writes. “The government has zero-tolerance with regard to this issue,” a spokesperson said, pointing out to the infrastructure that continues to help victims during the state of emergency, adding that those seeking help need not abide by movement restrictions. (Vlagyiszlav Makszimov | EURACTIV.com)

Breaching quarantine. During the Easter holidays, 68,552 people were stopped at the exits of the Bulgarian capital Sofia as they tried to leave the city without being able to prove travel for work or medical care. Meanwhile, 125,072 people have been stopped at the country’s various checkpoints. So far, over 12,000 have been fined for violating the country’s anti-pandemic measures, of which 8,703 were fined for not wearing obligatory sanitary masks.

The prosecutor’s office said it was currently leading 1,048 investigations, of which 116 are for filling in incorrect data in the declarations at the checkpoints. (Krassen Nikolov | EURACTIV.bg)

Cereal crops deeply affected by drought. Romania’s harvest will be much lower this year compared with previous years, Agriculture Minister Adrian Oros said on Thursday (23 April), adding that while some 2.9 million hectares are affected by drought, the production of winter cereals could fall by 50-60%. While Romania could still provide for domestic consumption as one of the EU’s largest cereal exporters, with a third of its harvest typically meeting the needs of domestic consumption, a drop in yields would significantly diminish exports.

Recently, Romania banned cereal exports in the context of the current COVID-19 pandemic, but the ban was lifted after just one week, with authorities claiming they spoke with traders to limit exports so that food security would not be affected. (EURACTIV.ro)

The government on Thursday (23 April) unanimously adopted the conclusion of planned measures to relaunch economic and other activities in the context of the COVID-19 epidemic.  Although PM Andrej Plenković said that easing restrictions is important for normalisation, it ”does not mean that we can relax.” Measures will be gradually relaxed as of Monday (27 April) in three stages, HINA reports. Read more here. (Karla Junicic, EURACTIV.hr)

Serbia does not need EU’s favourable loans. Serbian President Aleksandar Vucic said in response to opposition criticism on Thursday (23 April) that the European Commission did not offer Serbia financial aid but favourable loans intended for countries with balance of payments difficulties, which, according to him, Serbia does not have. EURACTIV Serbia has the detail.