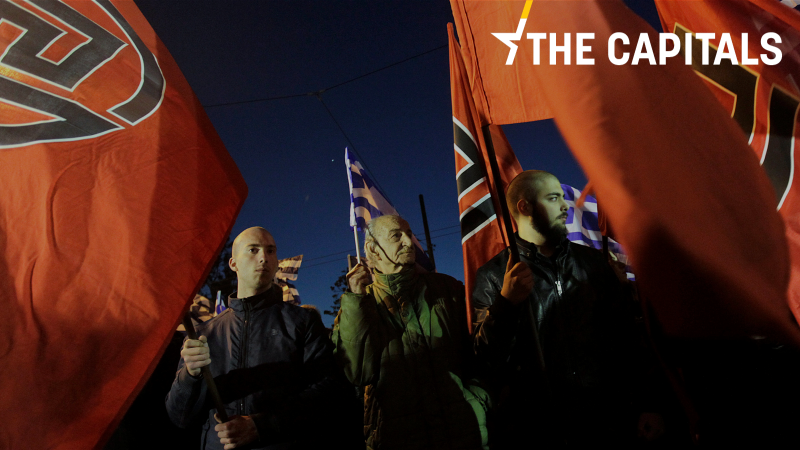 The Capitals brings you the latest news from across Europe, through on-the-ground reporting by EURACTIV’s media network. You can subscribe to the newsletter here. [EPA/ORESTIS PANAGIOTOU]

Mitsotakis, a liberal politician, has vowed to decrease taxation and create a business-friendly environment that will attract much-needed new investments and create new jobs. He has also said he will fight against Tsipras’s tolerance toward insecurity and violence in the centre of Athens.

The official government posts have not been announced yet; however, Greek press reported that it is highly likely that Margaritis Schinas, the current chief spokesperson of the European Commission, will be the next foreign affairs minister.

Tsipras’ Syriza party said it was not “strategically defeated” as it will be a strong main opposition party with 31.5% of the vote. According to Tsipras, his party has now officially prevailed in the centre-left side of Greek politics over the Pan-Hellenic Socialist Movement (Pasok), which only scored 8%.

He also hinted that the creation of another large progressive party is ongoing.

>>Read more: Four things we learned from the Greek elections

The Greek neo-Nazi Golden Dawn party, which in 2012 elected its first lawmakers, did not manage to pass the 3% threshold and will not be represented in the next Greek parliament.

EURACTIV Greece reported that voters turned their backs on the neo-Nazis, who have now lost their immunity in an ongoing trial into the 2013 murder of anti-fascist rapper Pavlos Fyssas by a Golden Dawn supporter. The party is also accused of forming a criminal organisation.

Stelios Kouloglou, a Syriza MEP, told EURACTIV.com that it was the best news of the elections. “The neo-Nazi party is out of the parliament. They used the Greek vote to spread their Nazi propaganda but now, this is over”. Kouloglou said Golden Dawn was a “symptom” of the financial crisis and the country’s economic and political bankruptcy.

“This is a signal that Greek politics has now come back to normality,” Kouloglou said, adding though that the “serious version” of Golden Dawn entered the parliament, the Greek Solution party.

Greek Solution is a pro-Russia, nationalist and anti-migration party, which scored 3.7%. “Although they are clearly ultranationalists, they make no reference to neo-Nazism,” Kouloglou said.

In Berlin, Christian Democrats (CDU) leader Annegret Kramp-Karrenbauer issued a warning to the socialists (SPD) about the appointment of defence minister Ursula von der Leyen (CDU) as the next EU Commission chief. Should von der Leyen fail because of the SPD’s blockade in the European Parliament, this would “be a maximum and massive burden on the grand coalition”, Kramp-Karrenbauer told ZDF television on 7 July.

She added if von der Leyen’s bid is torpedoed then it would also spark a major conflict between the European Council and the Parliament. “This weakens the EU’s ability to act. Those who follow such a line also weaken German interests in the end – that cannot be in the sense of a governing party.”

Meanwhile, in Brussels, Johan Van Overtveldt, a former Flemish conservative N-VA minister and newly elected MEP (ECR), said the EU top job package is “very southern”. The ECR group has not yet decided whether they will support von der Leyen. “I have nothing against the person. But if it takes the path of a super-European state that will dominate everything, then we will oppose it clearly,” he told VRT radio.

In Bratislava, Maroš Šefčovič’s nomination for the next EU Commission is under threat due to the anti-gay agenda of Slovak’s nationalists. Particularly, the Slovak National Party (SNS), a junior coalition party in the Slovak government, has threatened to withdraw its backing for Šefčovič because he supported his speechwriter, who is gay and is raising children carried by a surrogate mother together with his husband. According to SNS, this is “ethically unacceptable”.

Alternative parliament. Unsuccessful Tory leadership candidate Rory Stewart has outlined plans for an ‘alternative parliament’ in order to stop a no-deal Brexit if the new prime minister tries to discontinue parliament to force it through this autumn. Leadership favourite Boris Johnson has refused to rule out the prospect of closing the House of Commons in order to force through a no deal Brexit in October. Stewart, who performed surprisingly strongly in the Conservative leadership contest, said that former speaker Betty Boothroyd could be enlisted to oversee MPs. He added that between 20 and 30 Tory MPs would vote against no deal. (Benjamin Fox, EURACTIV.com)

Failure to prevent domestic murders. In light of a growing number of women killed by their husband, the French government announced on Sunday the launch of a “Grenelle on domestic violence”. In an interview with the Journal du dimanche, Secretary of State for Gender Equality Marlène Schiappa said the government would also organise “a major citizen consultation and a communication campaign”.

Following a demonstration of feminists in Paris demanding immediate measures, Emmanuel Macron acknowledged that the Republic had “failed to protect” victims of murders committed by spouses or former companions.(EURACTIV.fr)

Reforming Dublin ‘alone’. The overhaul of the current Dublin system on migration came back to the political debate, following the tension between the government and migrant rescue ships that dock in Italy without permission. “It doesn’t seem that most EU countries are bent to revisit the Dublin Regulation, so we’re working to reform it by ourselves,” said hardline Interior Minister Matteo Salvini. The current system says that the member state of first entry is responsible for the asylum application, putting the entire burden of the process on coastal states like Greece, Spain and Italy.

Cruise ship issue. Another cruise ship risked being shipwrecked in Venice, just one month after the last crash. The ship struggled to stay on course due to bad weather conditions, grazing some public transport vessels and a private yacht. (Gerardo Fortuna, EURACTIV.com)

Tough choices. The Polish People’s Party (PSL/EPP), which was part of the European Coalition in the EU elections, said it’d participate in the parliamentary elections this year on its own. However, this could change and there might be a broader coalition again if the Civic Platform (PO/EPP), the largest opposition party, moves to the centre, PSL said. According to EURACTIV.pl, this is not likely, as PO has embraced leftists positions. (Łukasz Gadzała, EURACTIV.pl)

Interest in Czech visas and residence goes up. In 2018, the Czech Foreign Ministry received a record 722,000 applications for Czech visas. The vast majority of the applications (663,000) have been for the so-called Schengen visa – a 6.3% increase. The number of applications for long-term or permanent residence increased by more than a half. (Ondřej Plevák, EURACTIV.cz)

Slovenia and Croatia on ECJ. Today an oral hearing will be held at the European Court of Justice on the Bay of Piran dispute. Croatia will air its objections regarding the court’s jurisdiction in a case that Slovenia initiated. Ljubljana claims that Croatia violated EU law after Zagreb ignored a judgment on the border between two EU countries. Croatia rejects an ad hoc arbitrary court’s decision, which Croatia contends was compromised because of collusion between Slovenian officials and a judge. (Željko Trkanjec, EURACTIV.hr)

Government reshuffle? Disappointment is growing in the HDZ governing party (EPP) because party president and Prime Minister Andrej Plenković has not folded to public opinion and granted coalition partner HNS’s (RE) request to oust public administration minister Lovro Kuščević from government. Kuščević became famous when he said, “Thank God, I have so many real estates that I cannot enumerate them”.

Rumours in HDZ suggest that Plenković was expecting to be elected to some high-level position in Brussels and leave the government mess to somebody else. (Željko Trkanjec, EURACTIV.hr)

Tensions with Serbia. Bulgaria’s foreign ministry said the Serbian ambassador had been summoned because of comments made by Serbia’s Foreign Minister Ivica Dacic after Prime Minister Boyko Borissov’s remarks about Kosovo.

In an interview with Radio Television Serbia, Dačić said Borissov should respect the EU position on Kosovo, which according to Dačić, was that Kosovo was not independent, rather than trying to give a lesson to Spanish counterpart Josep Borrell.

Asked by a journalist how the appointment of Borrell, whose country doesn’t recognise Kosovo, as High Representative will affect the European integration of the Western Balkans, the Bulgarian PM replied: “Regarding the High Representative – when you take up such an important position, the last thing you have to do is defend your national interest and you have to defend the interest of the entire Union. If Borrell is elected, it won’t mean that Spain’s opinion will be relevant to the other countries that have recognised Kosovo”.

Fake news bans. Serbian PM Ana Brnabic said she had been informed by Kosovo Premier Ramush Haradinaj that the news on Pristina banning Belgrade officials from entering Kosovo was fake. “I am surprised with the fact that fake news in Pristina was spread by the advisors to the so-called foreign minister, but I am glad that it is fake as it reduces the tension in the region,” Brnabic told reporters at the Summit of Western Balkan prime ministers.

NATO main obstacle to form government. The President of the Party of Democratic Action of BH (SDA) Bakir Izetbegović said that for his party NATO membership remains the “red line” it cannot cross and that there is no way to form a new government without taking that commitment. The Serbian party SNSD strongly opposes NATO. (Željko Trkanjec, Euractiv.hr)

Failure of SEECP summit? The meeting of South-East European Cooperation Process (SEECP), which was planned for today and tomorrow in Sarajevo, is on the brink of collapse. Albania cancelled its participation, expressing solidarity with Kosovo, whose officials also won’t attend it because BiH has not recognised Kosovo as a state. The members of SEECP are Albania, BiH, Bulgaria, Greece, North Macedonia, Romania, Serbia, Turkey, Croatia, Moldova, Montenegro, Slovenia, and Kosovo. (Željko Trkanjec, EURACTIV.hr)