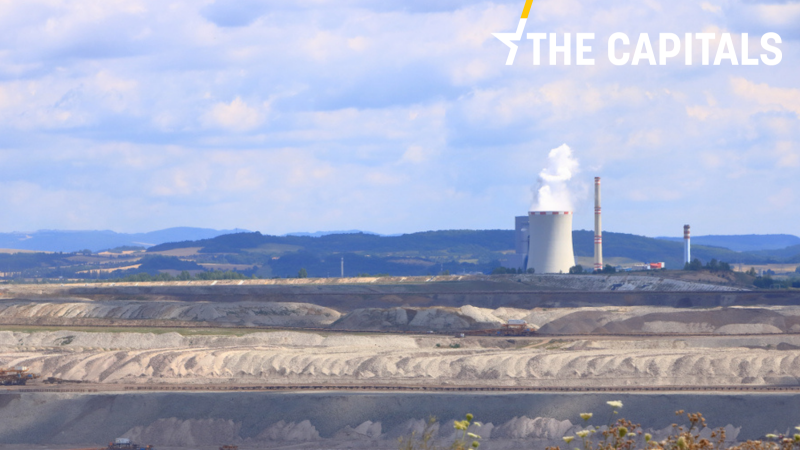 According to a leaked document, a large part of that amount will go to chemical plant Lovochemie, which is owned by Czech Prime Minister Andrej Babiš' former agrochemical holding Agrofert. [Shutterstock/Dynamoland]

Before you start reading today’s edition of the Capitals, have a look at “Finance: Becoming green while in the red“, an exclusive opinion piece by Mairead McGuiness, European Commissioner for Financial Stability, Financial Services and the Capital Markets Union.

Large Czech energy companies to receive Just Transition Fund money. Large energy companies in the Czech Republic will receive financial aid from the new Just Transition Fund since “fundamental change in the region can only be achieved through a change of the main actors in the market,” the Czech regional development ministry told EURACTIV.cz. Read more.

LEAK: EU aims for 250% growth in offshore wind by 2050. Offshore wind capacity in the EU “should be multiplied by 25 times by 2050” as the European Commission looks for all possible ways of boosting the share of renewables in energy consumption, according to a draft policy document seen by EURACTIV.

Bavaria, Hamburg against relaxing the lockdown. As German Chancellor Angela Merkel is set to meet with Germany’s state leaders on Monday to assess the lockdown measures, which have been in place for two weeks, Bavarian leader Markus Söder (CSU) and Hamburg’s Mayor Peter Tschentscher (SPD) have spoken against loosening the current coronavirus restrictions over the weekend. Read more.

Read also: Homelessness cannot be just another ‘Fact of Life’ in the EU

Negotiations on Viennese government finished. A coalition between the Social Democratic Party (SPÖ) and the liberal NEOS was formed on Sunday after three weeks of negotiations to govern the city of Vienna.

It will be the first government of its kind in Vienna, which had been governed by a red-green coalition for the last ten years. The key points of the coalition agreement will be presented on Monday and in greater detail on Tuesday after the respective parties internally gave their final blessing. However, it already seems likely that the NEOS will focus on schools and universities, with their Viennese leader Christoph Wiederkehr becoming city councillor for education. (Philipp Grüll | EURACTIV.de)

Belgium to resume testing symptom-less from 23 November. Next week, people who have no symptoms of COVID-19 will again be able to get tested if they come into contact with a person that was positive. This has not been possible in recent weeks as there were too few tests available. Read more.

Johnson self-isolating at the start of crunch week. UK Prime Minister Boris Johnson is self-isolating after meeting a Conservative lawmaker who has since tested positive for COVID-19. Read more.

COVID-19 was present in Italy since the summer of 2019. COVID-19 was in Italy before the pandemic started to spread across the country in February, according to a study conducted by the National Cancer Institute of Milan. Read more.

Read also: COVID-19 was in Spain a year before breakout

More than half of Spaniards lose income due to pandemic, survey finds. More than 50% of Spanish citizens claim to have lost their income and purchasing power since the start of the first COVID-19 outbreak in March, according to a survey published on Sunday. Read more.

Ban on public gatherings opens Pandora’s Box. A four-day ban on all outdoor gatherings of more than four persons, imposed throughout Greece by an executive decree of the Greek police chief, has created political turmoil. The measure was imposed to avoid public demonstrations in memoriam of the fight against military dictatorship in the early 70s. More.

Hungary to receive 10 doses of the Russian vaccine this week. “Because it is about people’s lives, it is forbidden to politicise the vaccine issue,” 444.hu quoted Foreign Minister Péter Szijjártó as saying in a Facebook video published on Friday. Szijjártó said that “it is our job and duty to get as many vaccines as possible from as many sources as possible,” adding that 10 sample doses of the Russian vaccine will arrive from Moscow this week. (Vlagyiszlav Makszimov | EURACTIV.com) – Read also: Russian vaccine to arrive in Hungary

Slovakia to help Austria as COVID-19 cases grow. Slovakia will send health personnel and provide the know-how to help Austria deal with the increasing number of COVID-19 cases, Prime Minister Igor Matovič announced on Facebook on Sunday, in response to Austria’s plans to test its population for COVID-19 the “Slovak way”, i.e. on a mass scale. (Zuzana Gabrižová |EURACTIV.sk)

If we close our eyes to North Macedonia, we are serving Moscow, says Bulgarian foreign minister. If we continue to close our eyes to the fact that the ideology of Skopje continues to be founded and developed in the way it was conceived by Tito and Stalin, we are doing the work of Moscow, said Foreign Minister Ekaterina Zaharieva on Sunday in response to critics saying Bulgaria blocking North Macedonia’s EU membership negotiations would be serving the interests of Russia and China. Read more.

Moody’s rating agency recognises Croatian policy, says PM. Moody’s credit agency – which upgraded Croatia’s credit rating from Ba2 to Ba1, just a notch below full credit rating, and changed its outlook to stable from positive – has clearly recognised the good policy being pursued by the Croatian government and its response to the COVID-19 crisis, said Prime Minister Andrej Plenković, adding that the agency also appreciated Croatia’s entry into the ERM II, the ‘waiting room’ for joining the single currency. Read more.

Croatian border is a ‘grey zone’, says Slovenian minister. Slovenia’s border with Croatia is a “very, very problematic grey zone,” Slovenian Interior Minister Aleš Hojs said on the sidelines of an EU ministerial on the proposed migration pact on Friday. Whether Slovenia will be able to return migrants to Croatia remains unclear, he added.

In other news, Hojs also confirmed that during the lockdown, no wedding ceremonies will be allowed to take place, unless in “urgent and necessary” cases, citing the bride’s pregnancy as a justifiable reason. However, in Slovenia, almost half the children born within a year are out of wedlock, according to data from the State Statistical Office. Only France has a bigger percentage – 60%.  (Željko Trkanjec | EURACTIV.hr)

Serbia announces new nationwide restrictions. Shops, restaurants, night clubs and cafes in Serbia will have to close at 9pm as of Tuesday, while only pharmacies, gas stations, food delivery services and night shift employees will be allowed to work between 9pm and 5am, the government decided on Sunday in a bid to curb the spread of COVID-19. Read more.

SDA loses Sarajevo, Dodik Banja Luka. The biggest Bosniak party SDA lost the capital Sarajevo, according to the first results of the local elections as reported by local media, klix.ba and avaz.ba. Meanwhile, the SNSD, the party of the Serb member of Presidency, Milorad Dodik, has lost Banja Luka, capital of Republika Srpska, one of the country’s two entities.

It is a huge strike to both SDA leader Bakir Izetbegović and Dodik. However, one should not expect too much because it is mainly a competition inside each of the three constitutional nations, as there is still no trans-national political power. Croats are waiting for the Mostar elections set for 20 December, in which it is expected that HDZ BiH or its so-called “competitor”, HDZ BiH 1990, will retain power in majority Croat municipalities.  (Željko Trkanjec | EURACTIV.hr)

Central Bank: No cash outflow  Between the start of September and 11 November, there were no transactions that would affect the reduction of liquid assets and the outflow of deposits to the extent that would jeopardize adequacy of the liquid position of any bank, the Central Bank of Montenegro told Pobjeda daily.

The Central Bank’s comments came in response to the statement of Prime Minister-designate Zdravko Krivokapić, saying that a bank in Montenegro is transferring massive amounts of cash to its Serbian subsidiary, thus buying real estate in Serbia. Krivokapić has said that the money is not being transferred via the Central Bank, but rather directly. (Željko Trkanjec | EURACTIV.hr)

Governance in Albania deteriorates during pandemic. Albania saw its good governance indicators deteriorate during the pandemic, according to the EBRD’s transition report for 2020-2021 entitled “The state strikes back”. Read more.

The former prime minister criticised Albanian Prime Minister Edi Rama, saying he does not dare tell the truth about Serbian President Aleksandar Vučić. “We will not be able to unite as a nation, we will not be able to cooperate as states if we have different stances toward Serbia which is against us”, said Kurti. During his time as prime minister, Kurti had an Albanian flag in his office. (Željko Trkanjec | EURACTIV.hr)