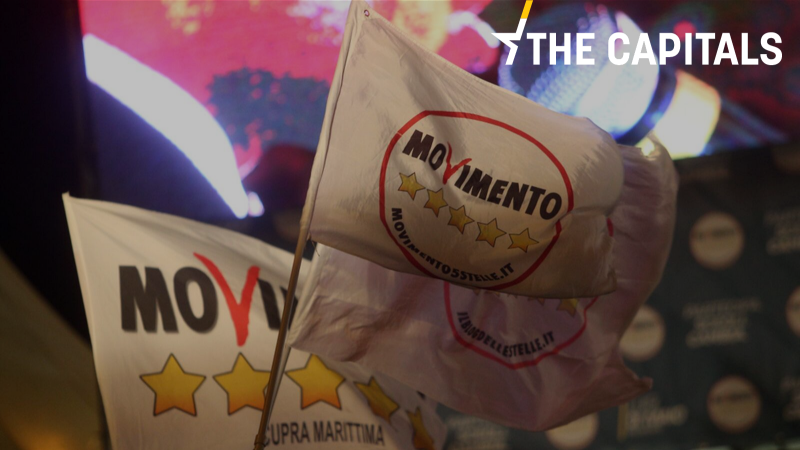 ***Correction: Following the publication of this article, a source from the Greens said no vote is going to take place today, but there will be a discussion instead.

“Today the Greens/EFA group will decide on whether or not to explore the possibility of opening talks with the 5 Star movement,” the source said.

Before you start reading The Capitals today take a look at the possible draft timetable on the European Parliament’s hearings for the Commissioner-designates, which is being circulated in Brussels. Full confirmation on Thursday. 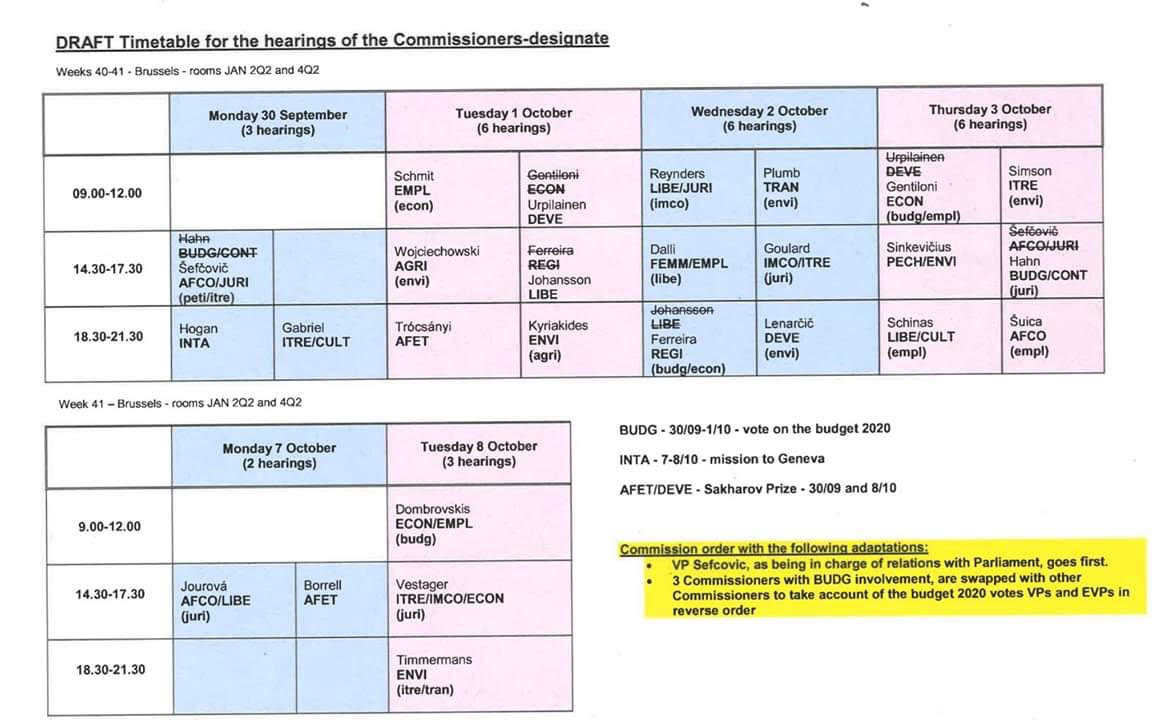 A possible draft timetable on European Parliament hearings for the Commissioner-designated circulated in Brussels.

Greens discuss Five Star today. The Greens/European Free Alliance of the European Parliament has postponed a critical vote on whether it will accept Italy’s Five Star Movement among its ranks. The vote was due yesterday (17 September) in Strasbourg, but sources said the group needed more time for discussion. A discussion will take place today on whether the greens will open the “negotiations” with the 5-Star Movement.

Sources from the group told EURACTIV in Strasbourg that the Five Star Movement, which currently does not belong to any political group in the EU House, has to make things clear regarding its links with the far-right and migration. “They worked with Salvini until some weeks ago,” sources said.

The same sources added that the Italian party “rushed” to tell the press that there are “advanced talks” with the Greens. “We understand this is politics, but the general public has input which is not accurate,” the sources said.

In addition, it seems that the British Greens find it “difficult to swallow that 5-Star used to be the colleagues of Brexiter Nigel Farage”.

Another source of friction between the parties could come from the support to von der Leyen’s Commission, as the Greens will confirm their opposition, while Five Star is supposed to vote in favour again.

However, the sources said that cooperation with 5-Star will be very helpful for the Greens too: “The far-right will not lose any seat after Brexit, while the Greens will do and we need to keep our fourth position in the EU House”.

In addition to that, the Greens also see a moral argument to partnering with 5-Star: “The voters of 5-Star are not only greens, they are also leftists, progressives… We have a responsibility to help Italy and what this country symbolises and embrace those voters who will make an EU push for the country”.

Spain to hold fresh elections. Spain will hold fresh elections on 10 November, after acting socialist PM Pedro Sánchez failed to get the support of leftist Unidas Podemos (United We Can, UP) on Tuesday (17 September). The acting PM also failed to obtain the abstention of the conservatives of Partido Popular (PP) and of the liberal-centrists Ciudadanos (Citizens), EURACTIV’s partner EFE reported.

“I have tried by all means” to form a “moderate” cabinet, but “it was impossible”, Sánchez said.

The decision of King Felipe VI of Spain came as a result of the political blockade the country has been experiencing since the 28 April elections, in which Sanchez’s socialist PSOE party won but did not obtain a sufficient majority to govern alone.

Analysts suggest that the failure is also a consequence of a “duel of egos” between acting PM Sánchez and the leader of UP, Pablo Iglesias, two strong personalities that according to some parliament sources “hate each other”. (Fernando Heller, EuroEFE.EURACTIV.es)

No end to the ban. Chancellor Angela Merkel (CDU) rejected demands from her own party to put an end to the export ban on military equipment to Saudi Arabia. Merkel said in Berlin on Tuesday (17 September) that she did not see “a prerequisite for a change of attitude on the part of the federal government at the moment”.

She added that the crisis in the region requires a diplomatic solution. Merkel’s position is perceived as an effort to avoid tension with coalition partner SPD. (Claire Stam, EURACTIV.de)

An EU House is essential. The Dutch Foreign Minister Stef Blok paid a visit to Strasbourg this week and met, among others, with EU Parliament chief David Sassoli, Dutch MEPs, centre-right MEP Mairead McGuinness (EPP), as well as the designated candidate for the Commission vice-president position, Frans Timmermans.

Sources told EURACTIV.com in Strasbourg that the purpose of the visit is to ‘intensify’ contact and engage better with the new EU Parliament.

“The weight of the European Parliament has the same weight as the EU Council. In a trilogue, focusing only on the EU Council is not enough for a country the size of the Netherlands,” the same sources said. (Sarantis Michalopoulos, EURACTIV.com)

Hearing ahead. Poland’s Commissioner-designate for the agriculture portfolio, Janusz Wojciechowski, will get an early start in the European Parliament hearings, with his being set for 1 October before both the AGRI and ENVI committees. After holding cross-party talks with Polish MEPs in Strasbourg, opposition MEPs signalled the possibility of support but said they wanted assurances for the support of Polish farmers. “There is an assessment that the Polish government made a certain gesture by withdrawing Krzysztof Szczerski. We know that Janusz Wojciechowski is not a farmer, but both his life and political journey are connected with agriculture,” MEP Bogusław Liberadzki (SLD/S&D) told Polish media. (Alexandra Brzozowski, EURACTIV.com)

Right of defence. In response to the EU’s Firearm Directive and a petition signed by 102,000 citizens, including politicians, the Czech upper house of parliament is preparing a constitutional amendment on the right of defence and legal possession of guns. Czechs are strongly opposing the Directive revised in 2017, which bans high capacity weapons, such as automatic firearms transformed into semi-automatics. The country filed a lawsuit opposing the Directive and is currently waiting for the European Court of Justice’s decision. (Aneta Zachová, EURACTIV.cz)

Right to reply revived. The Slovak parliament adopted a new media bill introducing a controversial right to reply for politicians. According to the version passed on Tuesday (17 September), politicians will be able to have their replies published, but only if these are in reaction to untrue or misleading statements. If the media fail to publish a politician´s reply, they may face a fine of approximately €5.000.  An amendment ensured that the right will not be applicable if the statements are factually correct – which was, in fact, the original government proposal. (Zuzana Gabrižová, EURACTIV.sk)

Refugee pressure. Bulgaria is ready to act if the refugee pressure on the Turkish border increases, the country’s deputy prime minister and defence minister, Krasimir Karakachanov, said. He commented on the statement of Turkey’s President Recep Erdogan, which said that Turkey is ready to ‘open the gates’ for migrants into Europe if international support for a ‘safe zone’ for refugees in northern Syria fails to materialise. Currently, the situation at the border is calm, but if migration pressure increases, Bulgaria is ready to immediately send up to 2,000 soldiers to the region, Karakachanov added. (Dnevnik.bg)

Creativity needed. “New trends ask us to be quicker, better and readier than those who pose a threat to us. We are continuing to build the homeland security system from day to day and this synergy which connects all components of this state is evidently giving results,” said Croatia’s defence minister, Damir Krstičević, during an international conference co-organised with the Jutarnji list, a partner of Euractiv.com. “We must think outside the box, encourage critical and creative thinking, and consider various scenarios. Croatia is a safe country today, which is recognised by millions of EU citizens, citizens from other countries who visit Croatia as tourists, and in other ways,” Krstičević said.

Swiss franc loans. The Croatian Supreme Court has ruled that banks have breached the collective interests and rights of holders of loans originally pegged to the Swiss franc. Court spokesman Željko Pajalić said that the court’s ruling contained the conclusion that “in the period specified, the banks breached the collective interests and rights of consumer-loan holders by concluding loan contracts containing unfair and invalid contractual regulations under which the loan principal was tied to the Swiss franc, without negotiating the matter with individual loan holders.” Banks will consider further legal options available to them in Croatia and at the European level, the Croatian Banking Association (HUB) and Erste Bank announced. (Željko Trkanjec, EURACTIV.hr)

Cooperation between small states. Cypriot Parliament Speaker Demetris Syllouris (Solidarity Movement/ECR) and Slovenian Parliament Speaker Dejan Židan (SD/S&D) announced the start of a bilateral initiative for small-state cooperation following talks between the two countries. Among other things, the initiative will aim at supporting the rule of law in the EU. It is unknown, which criteria will be applied to define “small-state”, but several years ago a similar initiative failed due to Cyprus not being invited. (Željko Trkanjec, EURACTIV.hr)

Emphasis on PM’s visit to the US. The Greek government has announced that PM Kyriakos Mitsotakis will meet US President Donald Trump in New York on 24 September, as well as with Turkish President Recep Tayyip Erdogan on 25 September. The PM will do so on the sidelines of the United Nations General Assembly meeting. Talks will focus on Cyprus and the Turkish aggressiveness in the region. Energy projects and migration will also be on the agenda, sources told EURACTIV.gr. (Theodore Karaoulanis, EURACTIV.gr)

Dual standards. Romania’s consumer protection authority ANPC has said that it had noticed quality differences in more than 20% of the products analysed in a comparative study of food products sold in Romania and Western countries.

The authority only compared the parameters printed on the products’ label, without conducting further tests, and said it identified differences of composition, nutritional value or proportion of some ingredients in 18 of the 79 verified products.

Voting with Kosovo-Issued IDs. Serbia’s President Aleksandar Vučić said that it was the US that had enabled Pristina to enforce a decision under which voters in Kosovo’s upcoming snap elections could only use only IDs issued in Kosovo to verify their identity. “It is the US that enabled them to do so, the Europeans did not allow it,” Vučić told reporters in Belgrade. (beta.rs,EURACTIV.rs)