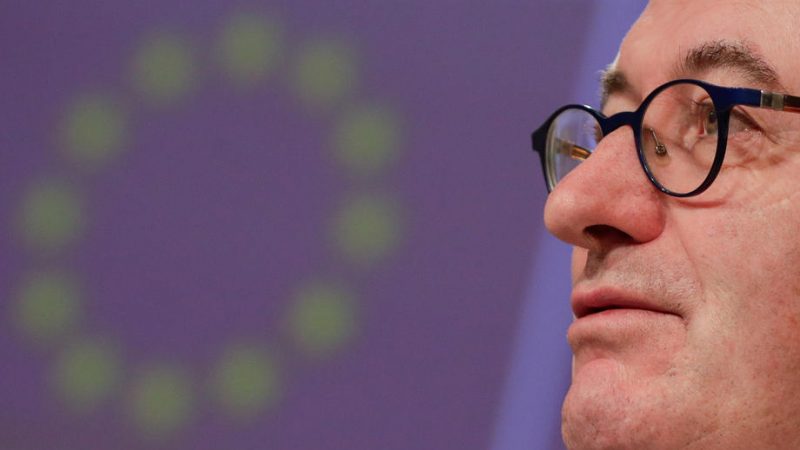 European Commissioner for Trade Phil Hogan gives a press conference on the Commission proposals to ensure the respect of the EU's international rights related to trade at the European Commission in Brussels, Belgium, 12 December 2019. [EPA-EFE/STEPHANIE LECOCQ]

The leader of Ireland’s Fianna Fáil party Micheál Martin has hit out at recent comments made by the EU Commissioner Phil Hogan, accusing him of making a ‘coded partisan intervention’ in Irish politics ahead of next week’s general election.

Hogan, the current Trade Commissioner, was in charge of the EU’s Agriculture portfolio until he was offered the trade file last year, after being nominated to the college by Irish Taoiseach Leo Varadkar. Before coming to Brussels, he had also been a minister with Fine Gael, the political rivals of Fianna Fáil.

Earlier this week, Hogan called for Irish people to “come out of their slumber,” warning that a “crash out Brexit” could still occur by the end of the year.

“I’m very concerned at what I see in Ireland at the moment,” Hogan said, according to The Irish Times. “There’s a lot of complacency in the system. Commentators and the media and the public generally don’t seem to realise we’re starting the most difficult part of the negotiations.”

The comments prompted Fianna Fáil’s Martin to criticise Hogan on Thursday morning (30 January). “I think Phil Hogan now should stay out of domestic Irish politics now for the next week. That was, to me, a coded partisan intervention,” he told reporters.

Article 17 of the treaty on the European Union states that “the Commission shall be completely independent…the members of the Commission shall neither seek nor take instructions from any government or other institution, body, office or entity. They shall refrain from any action incompatible with their duties or the performance of their tasks.”

On the Brexit front, Ireland’s Prime Minister Leo Varadkar sat down with the EU’s chief Brexit negotiator Michel Barnier earlier this week to discuss the next phase of the UK-EU negotiations.

Barnier said businesses could still face the risk of a cliff edge at the close of the year, should a trade deal not be agreed between the UK and the EU before the transition period ends on 31 December. Varadkar, for his part, struck a more positive tone, saying there will always be a seat at the EU table should the UK one day wish to return.

Meanwhile, Irish political parties have been heavily campaigning in recent weeks in preparation for the 8 February general election. Both Fine Gael and Fianna Fáil have made bold pledges in areas such as agriculture and housing.

Fine Gael’s Varadkar has highlighted the importance of a strong agricultural sector for Ireland’s rural communities, calling it the “heartbeat of the rural economy.” He also said that in any post-Brexit trade deal he would seek unhindered access for Irish farmers to the UK market.

Meanwhile, Fianna Fáil’s Martin has been highlighting the importance of housing development, saying there has been “too much hoarding of land” in Ireland’s midlands, which should be made available for future developments.