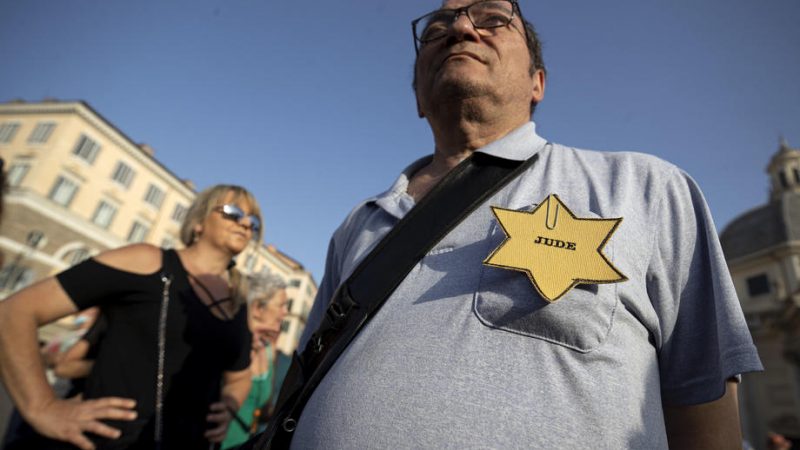 epaselect epa09374766 A man wears a badge, the yellow star that Jewish people were forced to wear by the Nazis, during a 'No Vax' demonstration in Piazza del Popolo, Rome, Italy, 28 July 2021. EPA-EFE/MASSIMO PERCOSSI

Centenarian Holocaust survivor Margot Friedlaender urged the young generation on Thursday (27 January) to always remember the Nazi genocide and denounced the use by some anti-COVID vaccination protesters of the yellow star Jews were forced to wear.

“Today, I see the memory of what happened being abused for political reasons, sometimes even derided and trampled all over,” she told EU lawmakers in Brussels at a ceremony marking the 77th anniversary of the liberation of the Auschwitz concentration camp in Poland.

“Incredulous, I had to watch at the age of 100 years how symbols of our exclusion by the Nazis, such as the so-called ‘Judenstern’, are shamelessly used on the open street by the new enemies of democracy, to present themselves – whilst living in the middle of a democracy – as victims,” Friedlaender added.

She was referring to some demonstrators at anti-vaccination protests who have pinned yellow star badges to their clothes, reminiscent of the cloth badges the Nazis forced Jews to wear to mark them as outsiders.

A report nL8N2U53YB published by the Israeli government on Thursday said such protesters were stoking global anti-Semitism.

Friedlaender’s mother and brother were killed in Auschwitz. She herself survived the concentration camp Theresienstadt in what is Czech Republic today, the only one in her family to survive the Holocaust, when the Nazis killed 6 million Jews during World War Two.

After living in New York for 64 years, Friedlaender said she returned to Berlin in 2010 to pass on her message to the younger generation.

“I have returned to talk with you, to reach out my hand to you, to ask you to bear witness in place of us who will not be able to do this much longer,” she said, speaking in German at the European Parliament.

“We cannot change what happened, but it must never happen again. This is why we have to be vigilant today – and not turn a blind eye as in the past,” she warned.

“You came back so that history could never come back. We have listened to the warning that is coming from people like you,” von der Leyen, herself German, said. “This time, we won’t close our eyes. Nie wieder, never again!”