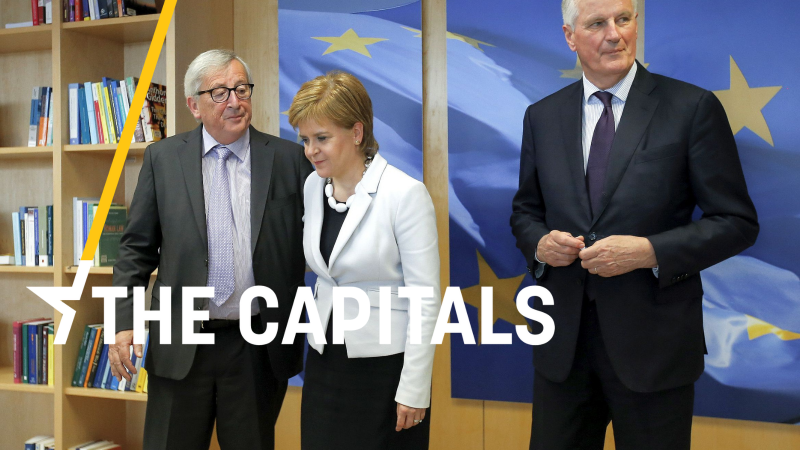 European commission President Jean-Claude Juncker (L) and Michel Barnier (R), European Chief Negotiator of the Task Force for the Preparation and Conduct of the Negotiations with the United Kingdom under Article 50, welcome First Minister of Scotland Nicola Sturgeon prior to a meeting in Brussels, Belgium, 11 June 2019.

‘Horror show’ of Tory leadership campaign. As the race to be the next UK Prime Minister heats up, Scotland’s First Minister Nicola Sturgeon took aim at the current Conservative campaigning for Theresa May’s job on Tuesday, calling it a “horror show” and claiming that a hard Brexit would “increase the likelihood of Scotland becoming independent.”

In an exclusive interview with EURACTIV, Sturgeon said that the scenario of Scotland leaving the UK would become a matter of urgency should a cliff-edge divorce with the EU take place.

Meanwhile in Westminster, Tory candidates for the Prime Minister job are doing their best to map out their plans for the UK’s future relationship with the EU. Frontrunner Boris Johnson has said he will refuse to hand over the £39bn EU withdrawal payment until the bloc offers the UK a better deal, and has committed to withdrawing from the EU by the deadline of 31 October 2019.

“Brexit, or the prospect of Boris Johnson or any of these hardline Brexiteers being prime minister, will undoubtedly further illustrate the divergent paths politically that Scotland and the rest of the UK are on,” Sturgeon told EURACTIV.

Meanwhile, another candidate is the former leader of the House of Commons, Andrea Leadsom, who said on Tuesday that she would not rule out the possibility of permitting a second referendum on Scotland’s independence from the United Kingdom. She is the first candidate to float the idea of allowing a second independence referendum to take place.

Scotland’s First Minister did not hold back on the opposition Labour party over their inability to substantiate a clear position on Brexit and for failing to support a second referendum on the UK’s decision to withdraw from the EU.

“Jeremy Corbyn is the roadblock barrier to building a coalition behind a second referendum,” Sturgeon said.

“If the UK crashes out of the EU with no deal at the end of October, the primary responsibility lies with the Conservatives and those that advocated Brexit, but not far behind there will be Jeremy Corbyn, whose prevarication will have made it harder to avoid that outcome.”

Where’s Boris? Former Foreign Secretary Boris Johnson, who is widely tipped to become the next UK Prime Minister, came under pressure on Tuesday as Conservative rivals accused him of “hiding from scrutiny.”

Despite being the frontrunner in the leadership campaign, Johnson has surprisingly stayed largely out of the limelight, opting instead to maintain a low profile.

“People need to see who the leadership candidates are and they have to be properly scrutinised,” Former Commons Leader Andrea Leadsom told an event in Westminster on Tuesday. “We need to ensure there are proper hustings and opportunities to look at the candidates.” (Samuel Stolton, EURACTIV.com)

Vestager? Nein, danke. Future SPD member of the European Parliament Katarina Barley says that Liberal Margrethe Vestager should not be considered as the next European Commission President. In an interview with German public radio broadcaster SWR on Tuesday, Barley praised the Danish Competition Commissioner but added that Vestager did not run as a Spitzenkandidat in the European elections and that the European Parliament had agreed that only a Spitzenkandidat could succeed Jean-Claude Juncker. (Claire Stam, EURACTIV.de)

Act 2 for Macron: Prime Minister Edouard Philippe will set out the Macron administration’s political calendar and legislative projects on 12 June, government spokeswoman Sibeth Ndiaye has said. The speech will focus on the “Act 2” of Macron’s presidency mandate, in a bid to renew confidence in a government weakened by the ‘Gilets Jaunes’ crisis and the disappointing second place performance of Macron’s LREM party in the European elections.

Macron’s next address in the parliament will not take place in June or July, said Ndiaye, and has been postponed to a later date.

Trump goes after French wine:  “France charges us a lot for wine and yet we charge them very little for [allowing] French wine,” President Trump said on CNBC television, adding that US  wine producers complain that French wines get to American shelves “for nothing.” The president of the French wine committee reacted to the scarcely veiled threats of a new tax by saying it was a “European issue”. “Customs duties on wine are set at the European level,” he added.     (EURACTIV.fr)

“I think Europeans (…) want a more political Europe” Borrell told EFE during a two-day visit in Kenya. Europeans “want a Europe that faces problems that can not be solved with rules written a priori, but by taking political decisions on such important issues as emigration, climate change, completing the architecture of the euro or the role it has in the world. And, of course, when people make a political demand, they can not be given a technocratic response,” said Borrell. (EuroEFE.EURACTIV.es)

Time for compromise. Italy’s Prime Minister Giuseppe Conte said his government is ‘determined’ to avoid the triggering of a disciplinary procedure for breaching the EU’s rules on budgets. However, he has agreed with his two deputies Luigi Di Maio and Matteo Salvini that no austerity measures will be taken to please Brussels.

One step closer. Meanwhile, EU governments’ representatives in the Economic and Financial Committee, an advisory group of the EU Council, have agreed with the Commission that a procedure against Rome is warranted. The ECOFIN sherpas’ opinion does not prejudge any decision by the EU ministers to open a procedure. A similar recommendation was made in November. (Gerardo Fortuna, EURACTIV.com)

Business in Poland. According to the latest report by EY, Poland is the leader in Central Eastern Europe when it comes to investment attractiveness, and sixth across Europe.. In 2018, 272 foreign direct investments (FDIs) flowed to Poland. The most FDI was in the car parts industry, transport and logistics, and the chemical production sector. (EURACTIV.pl)

Economic ‘bad mood’ According to ex-finance minister Peter Kažimír, now governor of the Slovak central bank (NBS), the bank foresees economic slowdown linked to weaker foreign demand and “global cooling”. There is no reason to talk about recession or deflation, he said, just a “bad mood”. (Zuzana Gabrižová, EURACTIV.sk)

Romania moves on Moldova: Romania’s Foreign Affairs Ministry sent a statement Tuesday saying the “citizen’s will” is the only way to ensure a legitimate political process, signalling Romania’s support for the newly formed coalition government in Chisinau, an apparent rebuke for foreign affairs minister Teodor Melescanu who on Monday backed the call for early elections supported by the former government. Asked about Melescanu’s statements, Prime Minister Viorica Dancila remarked that “maybe some spoke too early” and that Romania needs to have a unified position on “such an important topic.” (EURACTIV.ro)

Petříček told Czech Television that current Commissioner Věra Jourová is “one of the most serious candidates” with a chance to get an important portfolio. (Aneta Zachová, EURACTIV.cz)

4 month payment delay on state debt: On average, Greek enterprises are forced to wait almost four months before they collect their dues from the state, which is by far the longest period among European Union member-states, according to this year’s European Payment Report by Swedish company Intrum.

Budget concerns: Bank of Greece Governor Yannis Stournaras has warned on Tuesday that Greece will miss its budget target for this year as a result of new spending commitments promised by outgoing Prime Minister Alexis Tsipras. The matter will be discussed in the Eurogroup on Thursday.(Theodore Karaoulanis, EURACTIV.gr)

Cyprus to regulate AirBnB: Cyprus will regulate apps such as Airbnb, after Parliament’s Commerce Committee completed its debate on a bill, scheduled to pass after summer holidays, which provides for the registration of the premises in a special register, the payment of taxes, and other standards for self-servicing apartments and rooms. (Theodore Karaoulanis, EURACTIV.GR)

Digital Economy and Society Index: Bulgaria scored the lowest rating in the Digital Economy and Society Index that summarises Europe’s digital performance and tracks the digital competitiveness of EU member states. Only 29% of Bulgarians have basic digital skills, compared to a 57% average across the EU. Only 11% of people have skills above basic, which represents less than a third of the EU average.   (Dnevnik.bg)

Waiting for feedback: The ruling Croatian Democratic Party is still trying to find an explanation for their poor performance in the EU elections, so far blaming it on the ‘black swan’ phenomenon. Party’s branches were required to deliver their individual result analysis, and now they are waiting for feedback from the Presidency. (Tea Trubić, EURACTIV.hr)

State of the Nation. Outgoing President Dalia Grybauskaite delivered her last Annual State of the Nation Address to the Lithuanian Parliament on Tuesday, focusing on the urgent need to develop political culture in Lithuania. She also focused on the need to tackle corruption and, for the first time, climate change.

Meanwhile, the ministry of foreign affairs has issued a statement in support of EU enlargement, calling for accession negotiations with Albania and North Macedonia to begin without delay. (Angele Kedaitiene, http://eunewslithuania.com/)

One response to “‘Horror show’ of Tory leadership campaign”