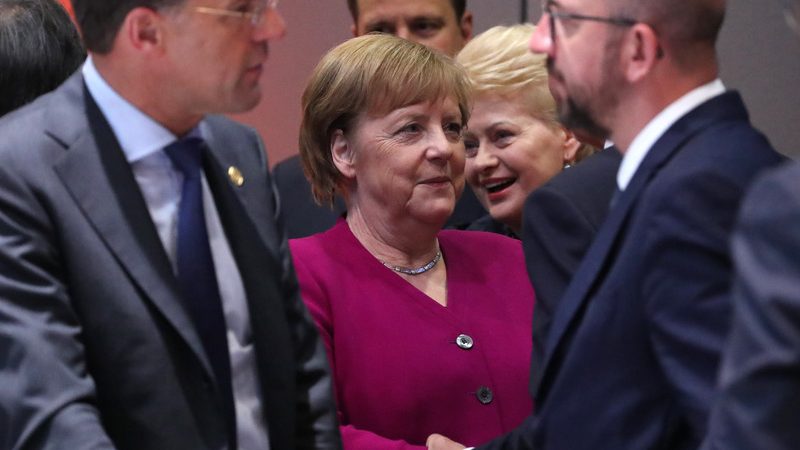 The proposal’s advocates are now pushing for a quick approval; however, a compromise is not expected before July, when Germany takes over the rotating EU Presidency. [EPA/YVES HERMAN]

The package includes a total of €500 billion of grants, while the rest will be offered to governments via loans on favourable terms.

According to the proposal, EU governments have a crucial role in deciding how the money will be spent, but the opposition of the so-called “Frugal” countries is still strong and tough talks are expected.

The proposal’s advocates are now pushing for a quick approval; however, a compromise is not expected before July, when Germany takes over the rotating EU Presidency.

Both Paris and Berlin have hailed the Commission’s proposal which was essentially based on the Franco-German presented recently.

Berlin kept a lower profile in its reaction. German Chancellor Angela Merkel (CDU) did not give much of an assessment one way or the other.

Merkel did, however, highlight that she intends to use Germany’s upcoming EU Council Presidency as a way to “constructively guide” the proposal through negotiations.

Belgium belongs to a group of 10 countries with the highest GDP per capita in the EU and would receive €5.5 billion in grants from the EU’s Recovery Fund.

Belgian finance minister Alexander De Croo (Open VLD) spoke of a “historic plan”, which would “strike the right balance between solidarity and responsibility.”

“This is the only way for Europe to emerge stronger from this crisis,” he added.

However, Belgium’s estimated amount is “premature and wrong”, De Croo warned. According to him, additional resources would be needed via other instruments or programs of the seven-year budget reinforced by the fund, such as EU Invest or the European Fund for Strategic Investments (EFSI), for which no distribution key is available yet.

“Our country is already a net payer of the EU budget, which means that we pay more to the European budget every year than we get back. A European recovery fund that consists entirely of grants would likely further deteriorate our position as a net payer. And that in very difficult monetary times,” Flemish Minister-President Jan Jambon (N-VA) complained ahead of the announcement.

Of the Frugal Four, Denmark found the warmest words of welcome for the EU Commission’s proposal. Danish Foreign Minister Jeppe Kofod called it a “very substantial addition to the many important measures that we have taken at European level in order to mitigate the impact of the crisis”.

The division between grants and loans is “an important step towards the Danish position”, however, the overall sums of budget are still “simply too high” for Denmark. In the upcoming negotiations, Kofod vowed to “fight for Danish interests” but acknowledged that a compromise will have to be found.

Finland is not happy with EU recovery plan details, but will analyse it, Europe Minister Tytti Tuppurainen of Social Democratic Party (SDP) has said.

Meanwhile, if the rhetoric of Swedish Prime Minister Stefan Lövfen is anything to go by, Sweden might be one of the tougher “Frugals” for the European Commission and the German EU Council Presidency to crack.

The PM said it was “remarkable that the European Commission is now proposing that €500 billion be distributed as grants, with no repayment requirements”. This could lead to wrong incentives, an inefficient allocation of resources, carrying a “significant increase in Sweden’s contribution to the EU”, he said.

With regards to the budget, the Swedish PM said it was “still too large”.

At the time of writing, there has been no official statement by the Dutch government.

However, a Dutch diplomat said: “It’s difficult to imagine this proposal will be the end state of those negotiations”.

The positions are “far apart”, and in the upcoming negotiations, the Netherlands will follow the lines laid out in the Frugal Four’s non-paper, including the principle of “loans for loans” and a rejection of a mutualisation of debt.

Austria is not just part of the Frugal Four, but recently acted as their spokesperson.

But this time, Kurz spoke only for himself – and immediately signalled a willingness to negotiate. Describing the commission’s proposal as “a starting point”, he praised its time limit as it prevents the mutualisation of debt.

Poland is satisfied with the European Commission’s proposal. President Andrzej Duda wrote that “Poland was urging Europe to have an ambitious budget. So, we have success! There will be a €750 billion Economic Reconstruction Fund and Poland will be one of its biggest beneficiaries.”

PM Mateusz Morawiecki also said the proposal was a good starting point while “Poland’s voice in Europe is heard”.

Before the announcement, Polish ministers cautioned to wait for the outline of the proposal but indicated that they prefer grants and will not be willing to be a net payer for the recovery fund, as projected earlier.

Poland’s economy is expected to contract by 4.3% this year and unemployment to increase to 7.5% according to the European Commission.

Slovakia is generally content with the European Commission´s proposal.

The implementation at national level will be a challenge given the limited administrative capacities and a history of being slow to draw EU funds in Slovakia, public officials acknowledge, especially if the money is frontloaded to the first three years.

According to preliminary calculations, Slovakia should benefit from an extra €8 billion, which amounts to 8% GDP. “For us it is important that the extra [funds] are linked to structural reforms,” the finance ministry’s state secretary, Ľuboš Jančík, has said.

Czech PM Andrej Babiš perceives the Commission’s proposal as a “big debt”. He thinks that the EU should borrow only an amount of money that is comparable with the economic decline caused by the coronavirus crisis. He estimates that the decline will reach 10-15%.

According to him, less developed economies with lower GDP than the EU average should have access to the same amount of money as they have in current programming period. He wants the money from the recovery programme to be distributed by the same allocation key as it was in 2014-2020.

Babiš also emphasised the importance of cohesion and investments in traditional economic sectors.

Portugal welcomed the Commission’s proposal as an ambitious response to the coronavirus challenge and underlined the fact that it is essentially based on grants. “The inclusion of this reinforcement in the MFF guarantees consistency between the recovery effort and Europe’s strategic priorities in terms of the fight against climate change, the digital transition and strengthening the strategic autonomy of our production capacity”, PM António Costa said.

Brussels estimates a 6.8% contraction in the Portuguese economy by 2020.

Economy Minister Roberto Gualtieri announced that the Italian government is working on a “major reform and investment plan” focused on sustainable development and innovation, with specific plans for the tourism and automotive sectors.

Spain is also happy as the executive’s proposal which “includes many of the demands that have been raised from Spain.”

Madrid trusts that the President of the Council, Charles Michel, will initiate consultations with the leaders to convene a meeting of the European Council “in the coming weeks, which will allow an agreement to be reached as soon as possible.”

Greece, which is projected to have the highest recession (9.7%) due to Covid-19, is also satisfied considering that it will receive approximately €22.5 billion in grants and almost €9 billion in loans.

Greek PM Kyriakos Mitsotakis stressed that the proposal creates a win-win situation for all EU member states and emphasised the significance of the EU single market.

“At the end of the day, even the countries that are hesitant and sceptical about whether we should go down that path, they are very much dependent on a single market, probably more so than we are,” the conservative leader said.

“If the single market were to collapse for whatever reason, they would pay a very, very big price,” he added.

Interesting has been the reaction of Malta, which will get approximately €350 million in grants and €642 million in loans.

The Times of Malta reported that Finance Minister Edward Scicluna had a “lukewarm reaction” to the announcement, Valletta fears that this package could eventually open the Pandora’s Box of tax harmonisation.

“It is good fruit, but like a prickly pear it must be handled with care,” Scicluna said. He also expressed his doubts about how the EU would finance the overall plan and whether it would put pressure on Malta’s favourable corporate tax schemes for the financial services and gaming industry.

Slovenia believes the Commission’s proposals are a step in the right direction and will certainly help to address the impact of the COVID-19 crisis.

“In this context, envelopes in the area of cohesion policy and rural development policy remain essential for Slovenia,” the government wrote in a statement.

In Croatia, Prime Minister Andrej Plenković announced that the European Commission had reserved €10 billion for Croatia, €7.3 billion of which will be allocated to Zagreb as grants.

“This plan is important for the whole of Europe, but especially for Croatia. This is a crisis which could have not been foreseen, and its consequences are going to be unprecedented. This crisis has shown the importance of EU solidarity. Our EU membership is no longer some abstract idea but is very real and crucial necessity,” he added.

However, it appears that the EPP and RE are content, while the socialists deplored the lack of discussion about the recovery plan on the domestic front and say the sum allocated to Romania is low.

Prime Minister Ludovic Orban welcomed the proposals regarding both the recovery instrument and the revised MFF budget in a phone conversation with German Chancellor Angela Merkel.

For Bulgaria, the poorest EU country, the Commission foresees a share of the stimulus to the tune of €15 billion, against a €3.3 billion contribution. Thus, the net amount that Bulgaria would receive, beyond what is provided in MFF, is €11.7 billion – over 19% of the country’s annual GDP. Allocated for 4 years, this means about 5% of GDP per year, and is set to be supplemented by the more than 3% of GDP Bulgaria expects to receive from the EU budget.

Economist Ivailo Kalfin, a former Prime Minister and former counsellor for MFF to Budget Commissioner Guenther Oettinger, wrote in an exclusive op-ed for EURACTIV Bulgaria, advising that the country should prepare well not to miss what he calls an “unprecedented opportunity”.

He argues that the good news comes with commitments. “After 4 years, Bulgaria should be much closer to the rest of the EU in terms of productivity and income – the elements of the so-called real convergence. Moreover, we need to become a model for transformation with regard to the Green Deal and to digitise the economy”.