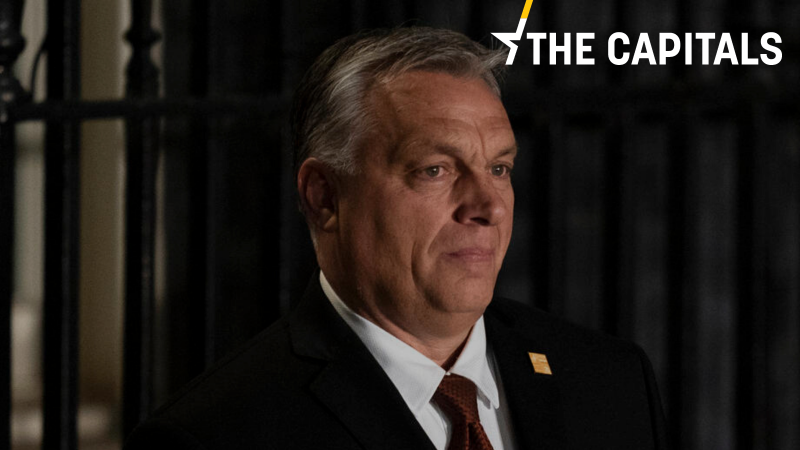 Before you start reading today’s edition of the Capitals, we invite you to read about what has been cooking at the COP25 as the climate summit embarks on its final week. Also, feel free to have a look at “EU ministers break ground on European ‘Magnitsky Act’“.

Read also an interview with the new boss of the EU research team on cancer Walter Ricciardi.

BUDAPEST. The government’s new package of laws on cultural activity is an attack on cultural freedom, the opposition LMP party (EGP) has said.

LMP referred its complaint to the general ombudsman saying that the government is attempting to make cultural institutions dependent on local authority funding and impose other restrictive measures, lawmakers Antal Csárdi and Péter Ungár told a news conference. The ombudsman hopefully would then refer the matter to the Constitutional Court, they added. Ungár decried the fast-tracked legislative procedure that allows only three days to consider the bill, which will be voted on Wednesday (11 December).

According to the draft law published on the parliament’s website, which the government has softened compared with an original version leaked on Friday, a new National Cultural Council will be responsible for the “unified strategic direction of various segments of culture”. Hungary’s minister for human resources Miklós Kásler, who oversees culture, would have a say in appointing theatre directors at institutions jointly financed by the state and municipalities.

A public petition urging lawmakers to reject the bill had gathered almost 50,000 signatures by Monday (9 December) evening. About 1,000 to 2,000 people participated in a demonstration last night on Madách square in the capital, with leading actors, theatre directors and Budapest’s green mayor speaking at the protest.

On 21 November, the European People’s Party (EPP) said that it would decide in late January whether it would keep the party of Hungary’s nationalist Prime Minister Viktor Orbán in their ranks. AFP recently reported that an EPP internal report is ongoing and is expected to be completed in December.

Coming together for sustainable supply chains. Despite the ongoing tension in Germany’s grand coalition, the governing parties are still making progress in certain areas. On 9 December, Labour Minister Hubertus Heil of the Social Democratic Party (SPD) and Minister for Economic Cooperation and Development Gerd Müller from the Christian Social Union (CSU) announced a joint effort to increase social standards in global supply chains.

The two ministers want to enact legal standards denying market access to companies that use child labour, have excessively low wages or other exploitative business practices. By enacting these laws, Heil and Müller aim to create higher standards in earlier stages of the global supply chain, where working conditions can be poor and exploitative. This comes after their trip to Ethiopia earlier this month, where both ministers were dismayed by the working conditions in clothing and coffee production. (Sarah Lawton | EURACTIV.de)

Austrian Greens likely to join government coalition. Austria’s Green party is expected to join the government for the first time, with negotiations already underway. After Sebastian Kurz’s ÖVP party governed alongside the Eurosceptic far-right group FPÖ from 2017-2019, this could now prompt a change in Austria’s foreign and EU policy. Philipp Grüll from EURACTIV Germany has the story.

Catalan separatists in ‘no hurry’. Catalan separatists of the Republican Left of Catalonia (ERC) are in “no hurry” to facilitate the investiture of acting socialist PM Pedro Sánchez, until their political demands are fulfilled, Spanish media reported.

The ERC’s positive vote – or abstention – is essential to allow the appointment of Sánchez and the formation of a “progressive” government coalition between the socialist party (PSOE) and leftist Unidas Podemos, which will likely be formed right after Christmas.

ERC’s negotiators will meet again this week with key members of PSOE in a move to seek a quick agreement on a “political solution” for Catalonia, as ERC described it.

ERC is demanding that the prosperous region of Catalonia be granted its right to self-determination, as well as amnesty for its “political prisoners”.

Meanwhile, Spain’s King Felipe VI will start a new round of consultations today (10 December) with representatives of all political parties in the country, EFE reported. (EuroEFE.EURACTIV.com)

No miracle for Ukraine in Paris. The heads of states of France, Russia, Germany and Ukraine agreed to meet again in 4 months to discuss the peace process in Ukraine, after a summit aimed at agreeing to measures to help end the conflict in Ukraine was held in Paris on Monday (9 December). “We made progress on disengagement, prisoner exchanges, ceasefire and political developments […] and we asked our ministers for the next four months to work to organise local elections aiming for a new summit in four months’ time”, said French President Emmanuel Macron.

The summit was presented as a diplomatic success by the four heads of states but disagreements between Russian President Putin and Ukrainian President Zelenskiy, especially over the timing of the local elections in Donbas, were apparent. But they both agreed on several measures aimed at preserving efforts to curb violence in the eastern part.

“The result of this meeting is not as much as I was expecting. I was hoping to settle more topics” Zelenskiy said. (EURACTIV.FR)

New pick, new luck? Socialist leader Paul Magnette (PS) has asked the King to be relieved of his assignment of finding a federal government coalition after being three times unsuccessful in his attempts. For choosing his successor, the King has once again started a consultation round with all party leaders, kicking off with the Liberals on late Monday evening and is set to meet with Conservative CD&V, Flemish nationalist N-VA and the Greens on Tuesday (10 December) morning. Despite the inevitable choice of a new pick for a coalition builder, there are low chances that a breakthrough could be achieved until after the end of Christmas recess in January, party sources said on Monday. Belgium has been without a government for 198 days.

Farmers ask for green incentives. The National Farmers’ Union of England and Wales (NFU) has called on the next government to make sure that any future climate policy toward net-zero agriculture by 2040 should grant British farmers incentives.

“Any measures farmers take towards net-zero will require investment and significant changes, and we need the future government to create a policy which ensures these steps are not only right for the environment but right for our businesses too,” the farmers wrote in their general election manifesto.

Test for the coalition. After recent tensions over the European Stability Mechanism (ESM), Italy’s PM Giuseppe Conte has called for a check-up within the government coalition. Conte’s intention is to ensure that the ruling parties are still willing to move forward with the agenda they agreed on last summer. The “test” on the health status of Italy’s government will take place after the approval of the budget law. “I will ask political forces to agree on a road map and on some priorities to achieve,” he said. (Gerardo Fortuna | EURACTIV.com)

New Commission chief attacks Turkey. “We are on your side, Turkey’s action in the Aegean is unacceptable, we will send a clear message to Turkey,” new EU Commission chief Ursula von der Leyen told Greeks yesterday, amid escalating tensions between Athens and Ankara.

Sarantis Michalopoulos (EURACTIV.com) and Theodore Karaoulanis (EURACTIV.gr) have the story.

American style. Konfederacja, a far-right nationalist party that entered Poland’s parliament in recent elections, will be running its presidential primaries ahead of the May 2020 elections. Following the example of American primaries, the party already has numerous candidates and each province will be electing a certain number of electors, who, in turn, will select the candidate during the national convention in January. This is new for Polish politics, given that only PO had previously run similar primaries but didn’t use American politics as an example.

For now, however, the primaries in Konfederacja didn’t attract too many voters. But since entering parliament, Konfederacja is already doing better, as it had recently obtained 12% in the polls, compared to the 7% it obtained in the October elections. (Łukasz Gadzała | EURACTIV.pl)

Former spitzenkandidat in a conflict of interest? An article about the possible conflicts of interest of Czech MEP and former ECR Spitzenkandidat Jan Zahradil was published by EUobserver on Monday (9 December).

According to the article, Zahradil is currently leading negotiations on the EU trade deal with Vietnam, while chairing the advisory council of the Association of Vietnamese in Europe based in Prague, which is related to the communist Vietnamese National Front. He was nominated to chair the association in 2016 but did not declare his position to the Europea Parliament.  Following the article’s publication, the Greens/EFA asked European Parliament’s president David Sassoli to investigate the case.

Zahradil, who is a vice-chair of the EP’s INTA committee, has denied any conflicts of interest. “My record has been absolutely clean over my last 25 years in politics and it remains so,” Zahradil has claimed, noting that he will ask Sassoli and INTA committee chair Bernd Lange (S&D) to “sort this matter out”. (Aneta Zachová | EURACTIV.cz)

For the first time in months, the opposition party of Democrats (SDS) is leading the polls (16.3%), a new survey for journal Delo has found. SDS is followed by senior coalition party Marjan Šarec List (LMŠ) with 16.1%, while coalition parties SAB and SMC would not even be able to enter the parliament. (Željko Trkanjec | EURACTIV.hr)

Eurojust: Drug smugglers should be tried in Croatia. Under an agreement with representatives of institutions of all the countries that participated in Operation Familia and Eurojust, criminal proceedings against people who smuggled 600 kilograms of cocaine from South America to Europe and the Middle East should be conducted mostly in Croatia. Operation Familia was carried out by Croatian authorities in cooperation with the relevant institutions of the Czech Republic, Serbia, Switzerland and France. Slovenia, Belgium, Italy and the Netherlands also contributed to the investigation.

Croatia will be able to adapt to international economic circumstances The Croatian economy, alongside the government’s policy, which is based on fiscal consolidation, structural reforms and attracting investment, has become resilient and forecasts show that Croatia’s growth will be faster than the EU average, said Croatian PM Andrej Plenković. (Željko Trkanjec | EURACTIV.hr)

New chapter. The EU has decided to open another chapter in the membership negotiations with Serbia, starting on Tuesday (10 December): the one dealing with the free flow of capital, which is significant to building economic ties and European investment in the Serbian economy. Chapter 4 will be opened at an EU-Serbia inter-governmental conference, on the sidelines of an EU foreign ministerial session in Brussels. Serbian government officials said they were unhappy that just one chapter would be opened, insisting that Belgrade was ready to open several more. (EURACTIV.rs)

Boycott of Nobel for Handke. The Office of Željko Komšić, Chairman of the Presidency of BiH, has informed the Embassy of BiH in the Kingdom of Sweden that no authorisation is given for any presence on behalf of BiH on the ceremony of the Nobel Prize for literature. It is given to Peter Handke, who was a fervent advocate of Serbian policy during the war in former Yugoslavia. Croatia, Turkey, Albania and Kosovo also announced that their ambassadors will not attend the ceremony. (Željko Trkanjec | EURACTIV.hr)