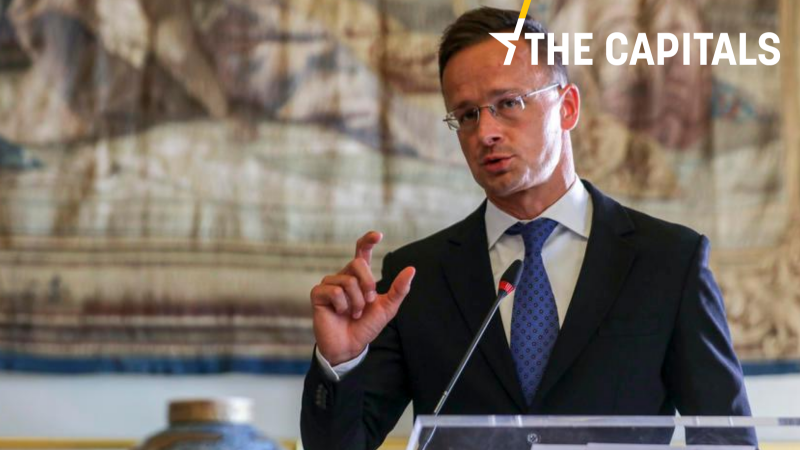 'While Hungary is a loyal ally of the EU and NATO, the country's foreign policy “will not be limited to a narrow field'. [MIGUEL A. LOPES/EPA]

Before you start reading today’s edition of the Capitals, feel free to have a look at our in-depth analysis before the EU foreign affairs meeting in Berlin EU-Turkey relations face make-or-break moment in Berlin, written by EURACTIV’s Alexandra Brzozowski and Sarantis Michalopoulos.

Hogan resigns after COVID-19 breach claims. EU Trade Commissioner Phil Hogan resigned on Wednesday, after a week of pressure over a breach of coronavirus guidelines.

“It was becoming increasingly clear that the controversy concerning my recent visit to Ireland was becoming a distraction from my work as an EU Commissioner and would undermine my work in the key months ahead,” he said in a statement.

Hungary re-focused foreign policy away from the West. Hungary’s foreign policy is focused on promoting the country’s economic interests, Foreign Minister Péter Szijjártó told a meeting of Hungarian ambassadors, during which he also called Hungarian foreign policy “balanced and patriotic”.

When it comes to “the global competition to re-distribute capacities”, Hungary can rely on a “pan-global network”, the minister said, according to Daily News Hungary.

The country’s aim, he added, was to draw tech investments into the country from the East, as well as the West. While Hungary is a loyal ally of the EU and NATO, the country’s foreign policy “will not be limited to a narrow field”, he added. (Željko Trkanjec, EURACTIV.hr)

In other news, the National Bank of Hungary announced that it is increasing the weekly purchases of Hungarian government bonds (HGBs) from last week’s HUF15 billion (€42 million) to HUF40 billion (€112 million) in the foreseeable future. (Željko Trkanjec, EURACTIV.hr)

Berlin outlaws ‘Corona protest.’ The Berlin Senate on Wednesday (26 August) banned several demonstrations against Germany’s coronavirus measures planned for this weekend. Organisers had planned to march through the central parts of the city, and had expected 17,000 people in attendance. EURACTIV Germany’s Sarah Lawton reports.

Health minister faces further criticism in re-drafting COVID-19 law. After Austria’s Constitutional Court ruled that previous coronavirus measures were illegal, the country’s Health Minister Rudolf Anschober (Greens) promised to rework the regulations and reorganise his ministry. The Austrian government is now preparing legislation in the event that the country has to go back into lockdown. This time around, Austria’s health ministry will have more extensive powers, which has garnered criticism from the opposition. Read more here.

Recovery plan to be officially announced on 3 September. French Prime Minister Jean Castex told France Inter in an interview that among the €100 billion planned for the country’s economic recovery plan, €40 billion would come from from EU funds. “If we had had this during previous crises, it would have changed everything,” said Castex, adding that “one should promote Europe when it does its job, and Europe has done it in an exceptional way.” According to him, the plan is not just about “rehabilitating Europe” but also “rehabilitating work”.

The long road to recovery. The Liberal Democrats will announced their fourth leader in five years on Thursday (27 August) as it seeks to re-start its recovery from three devastating election defeats. Ed Davey or Layla Moran will be announced as the new leader following a lengthy online campaign and will replace Jo Swinson, who resigned following last December’s general election.

Since entering a coalition government led by the Conservatives’ David Cameron in 2010, the centrist and pro-European party has suffered three dismal election results in which it failed to poll more than 10%. (Benjamin Fox| EURACTIV.com)

Updated travel advice for Belgium and its travellers. According to the latest update from Belgium’s Ministry for Foreign Affairs, Belgians can no longer travel to several new regions in France and Spain, which have been declared a ‘red zone’. At the same time, the EU’s capital has been declared a high-risk zone by several member states. EURACTIV’s Alexandra Brzozowski has the details.

Aid demands decrease. In August, 2,966 requests for governmental help have been validated by the last Economic Situation Committee, of which 43.5% come from the hospitality sector and events sectors. Compared to the 3,162 cases in July and the 3,670 ones in June, this figure seems to confirm that the Grand-Duchy’s economy will rebound.

Given that the measure is maintained until 31 December, the economy ministry is forecasting a total aid package of €1.2 billion. (Anne Damiani | EURACTIV.com)

Niinistö concerned about EU’s ‘slippery slope’ on constitutional law. Finnish President Sauli Niinistö has expressed growing concern over the way the EU is stretching the limits of its treaties. EURACTIV’s Pekka Vänttinen takes a closer look.

Italian government holds summit to discuss school re-openings. On Wednesday (26 August) the Italian government held a summit attended by ministers and regional governors on the reopening of schools. For now, the country’s education ministry has published the details of many of the safety protocols for the new school year, though several points are yet to be clarified. EURACTIV Italy’s Valentina Iorio has more.

Sánchez to hold new talks with opposition for unity amid pandemic. Socialist Prime Minister Pedro Sánchez is set to meet the heads of the country’s main opposition forces in parliament, official sources announced on Wednesday.

In other news, many European nations on Wednesday upheld and strengthened advice against travel to Spain, where coronavirus infection figures have increased since the end of the strict national confinement two months ago. The summer season in Spain has been a resounding flop for a tourist sector, which accounts for about 12% of the country’s annual GDP.

Spain was one of Europe’s worst-hit nations during the early weeks of the pandemic, with thousands of infections and hundreds of deaths each day at the peak between March and April. (EUROEFE with EPA)

EU-Turkey relations face make-or-break moment in Berlin. The escalating row over maritime borders and natural gas reserves that has pitted Turkey against Greece and the rest of the EU has put the bloc’s fragmented, meandering foreign policy to its gravest test in years.

EU foreign ministers are set to discuss the bloc’s bilateral relationship with Ankara during an informal meeting under the helm of the German EU presidency in Berlin (27-28 August). As they intend to touch upon all pending issues with Ankara, EU-Turkey relations are reaching a make-or-break moment. Read the full story from Berlin here.

‘Sovereign Belarus’ in Poland’s best interest, says PM. It is in the best interest of Poland that a sovereign Belarus can decide its fate, Prime Minister Mateusz Morawiecki said on Wednesday (26 August) after parliamentary cross-party talks focused on the situation in Poland’s eastern neighbour. EURACTIV’s Alexandra Brzozowski has more.

Czech Republic to sue over low quality respirators. After Chinese companies refused to act upon a complaint made by Prague about the low quality FFP2 respirators purchased during the coronavirus pandemic, the Czech Republic has decided to take the matter to court, Health Minister Adam Vojtěch confirmed. His ministry is currently calculating the financial damage.

“The Czech Republic is no exception in this matter. Other countries – Belgium, Netherlands, Spain – have similar experience with poor quality protective equipment from China. It is our duty to protect the interests of the Czech Republic and make all necessary legal actions against Chinese companies,” Vojtěch added.

Minister against Belarus disinformation. Foreign Minister Ivan Korčok on Wednesday (26 August) strongly rebuffed some of the most widespread disinformation on the developments in Belarus, including the idea that protesters are being paid from abroad, NATO is threatening President Alexander Lukashenko and the idea that Belarus is meant to become a fifth column of the West. (Zuzana Gabrižová | EURACTIV.sk)

Justice minister files resignation. Justice Minister Danail Kirilov filed his resignation on Wednesday after a talk with Prime Minister Boyko Borissov. The PM will decide whether to accept Kirilov’s resignation following talks with coalition partners, after which parliament will have to vote on his resignation. EURACTIV Bulgaria’s Krassen Nikolov takes a closer look.

Regulating the stay of digital nomads. Prime Minister Andrej Plenković on Wednesday (26 August) said on Twitter that Croatia would adjust the Aliens Act whereby Croatia will become one of the first countries in the world to legally regulate the stay of digital nomads. On that occasion, the PM met with Jan de Jong, a Dutch entrepreneur living in Split, to discuss amending the Aliens Act.

In other news, Plenković told foreign diplomats at a reception that he expects “intensive and open communication in the years to come”. Plenković also hopes his peers will help towards “strengthening the economy” and building “a tolerant society and resolving open questions with our neighbours, strengthen the relations between Croatia and your countries.” EURACTIV Croatia’s Željko Trkanjec has the details.

Controversial new media law. Representatives of media houses, the profession and unions have called on the government to withdraw the draft law on the media and prepare new texts with social partners and experts.

“This is an attempt to influence politics on the autonomy of the media,” commission chairman Branimir Štrukelj (independent) confirmed. Media are warning that Prime Minister Janez Janša is trying to implement the “Hungarian model” of media control in Slovenia. (Željko Trkanjec | EURACTIV.hr)

Respect for Dayton Agreements. Serbian President Aleksandar Vucic reiterated on Wednesday (26 August) that Belgrade’s stance was “the absolute adherence to the Dayton agreement” and the preservation of Republika Srpska (RS) in the way that is envisaged in that peace agreement. EURACTIV Serbia has the details.

“Greece, like any other state party to the UN Convention on the Law of the Sea, where geography allows and as long as the sovereign rights of another state are not violated, enjoys the right to extend the breadth of the Territorial Sea as provided by UNCLOS,” the Albanian government noted. (Željko Trkanjec | EURACTIV.hr)

School to start later. The school year for primary and secondary schools in North Macedonia will begin on 1 October, the government in Skopje decided yesterday.

In the past 24 hours, the country recorded 119 new COVID-19 infections, while five patients died as a result of the infection. While North Macedonia currently has 2,829 active cases, its total number of coronavirus infections reached 13,914 since the start of the pandemic, while 10,507 recovered and 578 have died. (Željko Trkanjec | EURACTIV.hr)

A sign of disagreement? Milorad Dodik, member of BiH Presidency in Serbia, congratulated  Belarusian President Alexander Lukashenko following his victory in the elections. Dodik was the only one in the region after the Serbian government joined the EU Declaration on Presidential Elections in Belarus yesterday. (Željko Trkanjec | EURACTIV.hr)

Incidents planned on election day. Montenegrin police have received data that individuals and groups plan to cause incidents and unrest on the day of parliamentary elections set for Sunday (30 August), said Veselin Veljović, the director of Montenegrin police. EURACTIV Croatia’s Željko Trkanjec looks at what else the police director said.