Welcome for US troops on Krakow Market Square during a picnic in January 2017, dedicated to the arrival of soldiers for strengthening NATO's eastern flank. [Sergiy Palamarchuk/Shutterstock]

A classified NATO report reveals huge problems with logistics and troop deployment that could threaten the alliance’s defence capability. NATO has been quite late in adopting a change of course. EURACTIV Germany’s partner Der Tagesspiegel reports.

NATO’s Commander-in-Chief for Europe, Ben Hodges, almost did not make it to a US-led manoeuvre in Romania last summer. He was flying in a helicopter from Bulgaria to Romania when he got the message that he has to make a stop at a Romanian base – for customs purposes. That would have been a delay of at least one hour. After several calls, Hodges was spared the visit to the customs unit.

This story could be not more than just a small anecdote, where bureaucracy is said to be the worst enemy of the military. But it gets more difficult when it comes to shifting a NATO-convoy from one country to another. According to the “Spiegel”, problems with logistics and supplies could even question the defence capability of the alliance itself.

“The ability of NATO to logistically support the rapid expansion in the vast territory of the European Commander-in-Chief’s area of responsibility has been atrophied since the end of the Cold War,” says a classified NATO report recently quoted by the Spiegel.

At present, there even might not be enough railroad carriages that can transport tanks. After the end of the Cold War, the alliance’s chains of command were heavily downscaled. NATO’s command posts in Mons, Belgium, and in Brunsum, the Netherlands, currently have only 6,900 soldiers based there, instead of 23,000 troops.

Today, border crossings of units are not clearly regulated, which is why Hodges demands a “military Schengen-zone” inside of NATO that would guarantee a fast relocation of troops and material from one country to another. Even NATO’s Rapid Deployment Force, as the report from Brussels Headquarters notes, might not be able to react fast enough.

Change in mindset after Crimea annexation

After the Cold War ended, NATO did not count on a major military confrontation in Europe. In Russia, a reform process had started that made a closer rapprochement towards the West more likely. A large part of US troops left Europe and NATO focused on foreign assignments, which demanded very different skill sets than territorial and alliance defence.

Only after the annexation of the Ukrainian peninsula of Crimea by Russia and after Moscow’s intervention in Eastern Ukraine in 2014, a change in mindset took place. At the 2016 NATO summit in Warsaw, the alliance decided to send around a thousand soldiers to the three Baltic States and Poland.

Germany took the lead over the multinational battalions in Lithuania. Moreover, the alliance agreed in Warsaw to audit the chains of command. First considerations will be presented at the NATO defence minister meeting in November.

Warnings were issued long in advance

Nevertheless, the reshaping of NATO happened quite late. Years before the Crimea annexation, warning voices had criticised a “lack of military risk and contingency plans for the new NATO members in the East,” as Klaus Wittmann, brigadier-general A.D., says.

Together with experts from several countries, he indicated in a study published in 2010 that the alliance is doing too little to prepare its reaction to a possible conflict in Europe. Although the risk of a large-scale war was considered as minor, the authors considered the possibility of a “smaller regional conflict” with Russian participation as a ‘not entirely unlikely’ scenario.

Although the criticism was included into NATO’s New Strategic Concept in November 2010, this happened “only on paper,” Wittmann told the “Tagesspiegel”. Meanwhile, NATO, as well as Germany, is said to be on the right track again.

“But the capabilities lost or abandoned in more hopeful times, the massive reduction of troops and weapons systems, the erosion of structures and the reductions in the command structure cannot be reconstructed again in a short period of time.”

“Solidarity is also demanded from us”

Wittmann also emphasised the meaning of the “Enhanced Forward Presence” in the Baltic States and Poland, agreed at the NATO summit in Warsaw: “This is the minimum of what the alliance owes to the allies and to itself,” said Wittmann, who is currently is a Senior Fellow at the Aspen Institute.

“In Germany, it was understood that the solidarity we enjoyed for decades from our allies, is now also demanded from us, amongst others, by the Baltic States.” 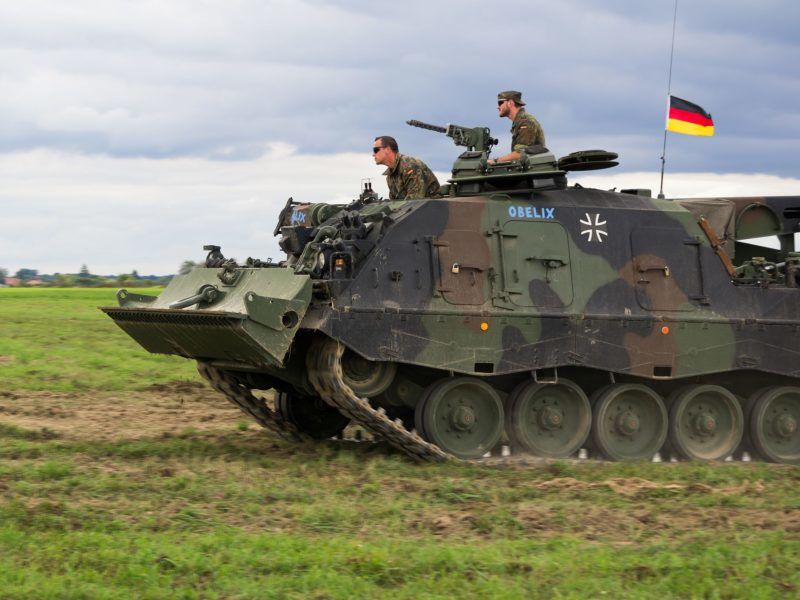 Even small multinational troop parts are said to have a high deterrence effect, because they show that a military attack on a NATO member is viewed as an attack on all of them.

“When it is said that the Baltic States are not defensible, I say: West Berlin was also not defensible but it was safe because of the American, British and French soldiers stationed there.”