Sales of European-built weapons systems, like the Eurofighter, to countries like Saudi Arabia continue to be criticised but continue to happen. [Richard P Long/ Shutterstock]

The global arms race grew significantly last year and sales shot up by 8.4%, according to a study by the Stockholm International Peace Research Institute (SIPRI) that compared the last five years with the 2007-2011 period. It called it the highest level since the end of the Cold War.

The five largest arms suppliers, the United States, Russia, China, France and Germany, are responsible for 74% of weapons traded around the world.

According to the SIPRI, the reason for this increase in sales is the growing demand presented by Asia and the Middle East.

“In order to fulfil their wish for greater military capacity, most Middle East countries have, over the last five years, turned to America and Europe,” said SIPRI researcher Peter Wezeman. Arms imports in the region rose by 86% since 2012. The top buyers were Saudi Arabia and Qatar.

Germany also reported increased exports. After declining sales over recent years, 2016 saw a new high reached: with a share of 5.6% of the international arms trade, Germany is the fifth biggest weapon supplier. According to SIPRI, a third of German weapons went to the Middle East and Africa.

The second biggest buyer last year was Saudi Arabia, who totted up receipts worth some €529 million. Berlin has attempted to justify its sale of weapons to the Middle Eastern kingdom by calling those exports “arms supplies to major European and American partners”.

The German component of the weapon system is installed later and makes up a part of the final product that arrives in Saudi Arabia.

In December, it was announced that 42,000 artillery fuses would be exported to France. Those components were then used in artillery systems bound for Saudi Arabia.

German expertise is also used to build Europe’s joint aircraft projects, the Eurofighter and the Tornado combat aircraft, which are also sold on to the Wahhabi kingdom. 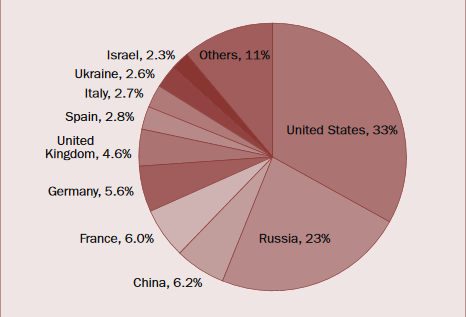 Berlin’s deals with Riyadh have been under pressure from experts and opposition politicians for years, which has only increased since Saudi Arabia launched a military intervention in Yemen in 2015.

The Saudis have already flown around 8,600 missions and nearly a third of those targeted schools and other public facilities. In October, its air force bombed a funeral in the capital of Sanaa and killed 140 people.

The record level of exports is in stark contrast to public opinion in Germany. A survey commissioned by the Left Party revealed in early 2016 that 83% of German citizens oppose in principle weapon exports. In 2011, that number was just 78%.

Opposition to arms sales is a pan-party issue, although the degree to which they are opposed varies. While around 90% of Left Party, Greens and SPD supporters are against weapon exports, only 76% of CDU/CSU voters are not in favour. Just 55% of AFD supporters are opposed.