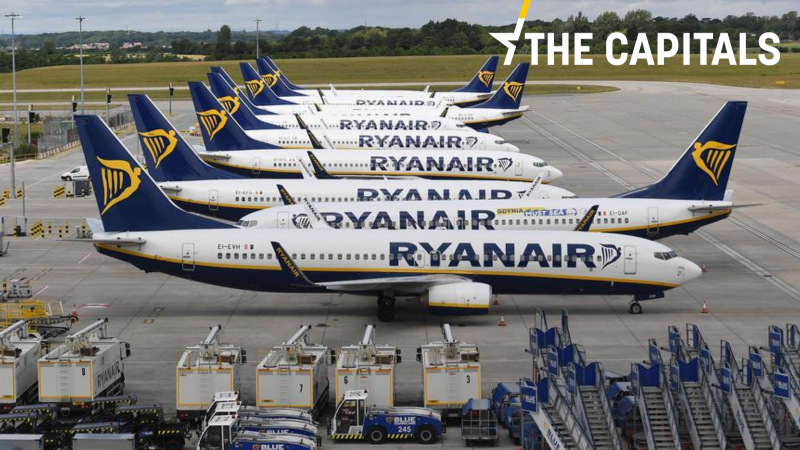 Before you start reading today’s edition of the Capitals, feel free to have a look at our analysis  In Berlin, EU credibility to be determined by fine line between Belarus and Turkey written by Alexandra Brzozowski and Sarantis Michalopoulos.

Irish airline Ryanair has challenged the state aid Brussels approved for European airlines due to the COVID-19 crisis before the European Court of Justice. Ryanair also challenged Portugal’s TAP bailout.

According to official information to which Lusa had access on Thursday and which was confirmed by Ryanair, the most recent appeal lodged by Ireland’s low-cost airline against European Commission authorisations for state aid in the aviation sector during the crisis, concerns Portugal’s TAP bailout, and was referred to the general court on 22 July.

New harmonised COVID-19 measures. Germany’s leaders reached an agreement to largely harmonise the country’s coronavirus restrictions, following a virtual meeting between the regional state leaders and Chancellor Angela Merkel on Thursday (27 August). However, the implementation will be left up to the regional entities. EURACTIV Germany’s Sarah Lawton has more.

Expanded testing for the hospitality sector. The Austrian government is expanding its state-financed testing to include employees at restaurants, camping sites, and hostels as of 1 September.

Previously, only hotel employees were regularly tested for free, and at present, between 2,000 and 4,000 tests are conducted per day on this group. There are also plans to expand the free regular testing to ski instructors once the season starts. EURACTIV Germany’s Sarah Lawton takes a closer look.

Yet another attempt to form a federal government. Liberal leader Egbert Lachaert (Open VLD), who is set to inform the Belgian King later on Friday about his progress in finding a solution for Belgium’s federal government puzzle, is officially trying for a coalition without the country’s biggest party, Flemish nationalist N-VA. EURACTIV’s Alexandra Brzozowski has the story.

Deputy PM resigns. Sweden’s Deputy Prime Minister and Environment Minister, Isabella Lövin, announced her resignation on Wednesday. Not only did Lövin leave the government, she also stepped down from her position as co-leader of The Green Party, which has followed the model of twin male-female leadership. EURACTIV’s Pekka Vänttinen looks into the details.

Spanish students plan COVID-19 strike for “lack of safe plans”. Secondary school students in the public education sector are planning to ‘strike’ from 16-18 September when classrooms reopen in protest at what they see as a botched up resumption of the school year amid a rising number of COVID-19 cases across the country, Spain’s student union announced on Wednesday. EURACTIV’s partner EFE reports from Madrid.

Portuguese COVID-19 app available as of next week. The ‘Stayaway COVID’-app which will allow tracing of contacts, should be available from next week, Portugal’s minister for the presidency and administrative modernisation, Mariana Vieira da Silva, said on Thursday (27 August).

The app is now ready as it has “passed all security tests”, she said, noting that “next week it will be available for download.” Last week, the ‘Stayaway Covid’ app began a series of security tests supposed to be completed in two weeks, said António Lacerda Sale, the secretary of state for health. (Mariana Caeiro, Lusa.pt)

Poland re-introduces ban on flights from 46 countries. As of 2 September, the blacklist is set to include France and Spain, according to a draft regulation published on Thursday, as the country grapples with a spike in COVID-19 infections. Other countries affected by the ban are popular tourist destinations Montenegro and Croatia, as well as Romania, the United States, Israel, Mexico and Brazil. Read the full story here.

China likely to be angered by Czech trip to Taiwan. Czech Senate speaker Miloš Vystrčil (ODS, ECR) will visit Taiwan from 29 August to 4 September. Despite strong criticism from China, Vystrčil will meet Taiwan’s top official to discuss common trade opportunities, the fight against the coronavirus, as well as economic recovery. His trip has been backed by a common statement backed by 70 politicians, including several MEPs such as the chair of the European Parliament’s Taiwan Friendship Group, MEP Michael Gahler.

Vystrčil will lead a delegation of several Czech senators and more than 40 businessmen and academics. (Aneta Zachová | EURACTIV.cz)

Meanwhile, Hungary will back the candidacy of the United Arab Emirates for membership on the UN Security Council and the Human Rights Council, the Minister of Foreign Affairs and Trade, Péter Szijjártó, said in a message on Facebook on Wednesday, after phone talks with UAE counterpart Sheikh Abdullah bin Zayed Al Nahyan.

Hungary sees both Israel and the UAE as friends and good partners, and regularly supports the countriesʼ efforts at international forums, Szijjártó added. The recent accord between the UAE and Israel on normalizing relations was “of historical significance. “This agreement nurtures hope in everyone that there really will come an era of peace in the Middle East,” said Hungary’s foreign minister. (Željko Trkanjec | EURACTIV.hr)

Tightened COVID-19 measures. Slovakia will start introducing a series of new epidemiological measures from September, which include bans of events like sporting events with more than 1,000 people in attendance, and bans of all events with more than 500 participants. Aquaparks will also have to scale back the number of allowed visitors. Travellers returning from Croatia, France, Spain, Netherlands, Belgium and Malta after 1 September will have to self-isolate for 10 days and get tested given that these countries are no longer considered safe.

€2.67 billion for infrastructure. Maritime Affairs, Transport and Infrastructure Minister Oleg Butković inspected works on the reconstruction of the railway running from the Zagreb West Rail Station to Savski Marof (close to the Slovenian border).

The minister underscored that the project was part of a large transport infrastructure investment cycle worth HRK 20 billion (around €2.67 bn), of which €1.5 billion would go towards work on the railway. The 18km-long-railway from Savski Marof to Zagreb West Rail Station is Croatia’s busiest railway line with over 160 trains passing along the route every day. It also forms part of the RH1 railway corridor, which is significant for international freight transport and urban-suburban transport.

In other news, police in the northern Adriatic county of Istria have filed a criminal report against a 77-year-old man on suspicion that since 2010 he has damaged 16 cars with Serbian licence plates. In two cases, threatening messages with elements of hate speech were left on the cars. (Željko Trkanjec, EURACTIV.hr)

Serbian Prime Minister Ana Brnabic confirmed on Thursday (27 August) that Belgrade had joined the EU’s Declaration on Belarus adopted at the beginning of the week, concurring reports that had been made within diplomatic circles.

The signing of the declaration is “what Serbia needs to do as part of the synchronization of its policy with European policy,” Brnabic told journalists during a visit to the School of Visual Arts in Belgrade, adding that she hoped that president of Belarus Alexander Lukashenko “will not take offence.” EURACTIV Serbia has the full story.

In other news, the expert meeting within the political dialogue between Serbia and Kosovo took place in Brussels on Thursday. Serbia was represented by the chief of the Serbian government’s Office for Kosovo and Metohija, Marko Djuric, and Kosovo by Skender Hiseni. Read more here.

Open-air school. The headmaster and staff of an elementary school in the country’s central city of Busovača decided to create conditions for outdoor education and built an amphitheatre and botanical garden for the school’s pupils.

The amphitheatre, which can accommodate 200 pupils, as well as the “other new amenities” were completed during the summer holidays by teachers who were engaged in the project but didn’t receive remuneration for their efforts. (Željko Trkanjec | EURACTIV.hr)

Really important elections. “The Montenegrin website Udar (Impact) is effectively branding investigative journalists critical of the government, along with certain independent intellectuals and opposition politicians, as enemies of state. The accusation is far from trivial in the context of an election campaign marked by the deep polarization of society,” said a document by Reporters Without Borders published on Thursday.. (Željko Trkanjec | EURACTIV.hr)