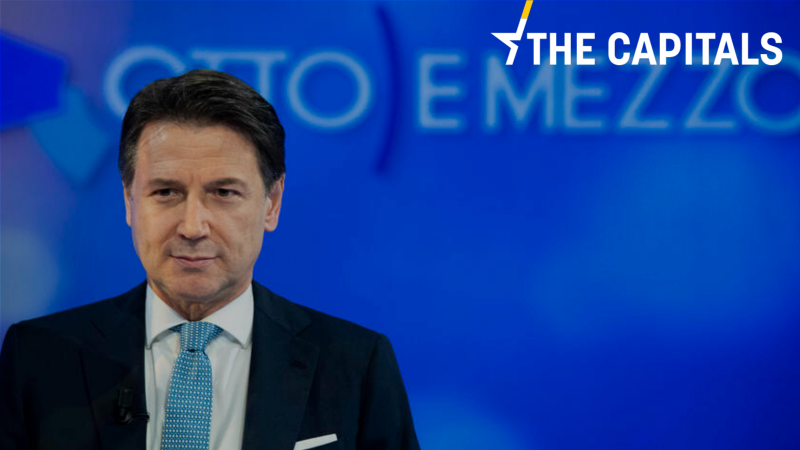 According to Conte, right-wing leader Matteo was Salvini deemed to be the "real loser" in the electoral competition.  [EPA/CLAUDIO PERI]

Before you start reading today’s edition of the Capitals, we invite you to read the story “US agriculture chief urges EU to listen to science, not fear-mongering NGOs” by Sarantis Michalopoulos.

Also, feel free to have a look at the article “UK to make Huawei decision today, amid intensifying US pressure” written by Samuel Stolton.

EURACTIV’s Gerardo Fortuna looks at the current state of play in Italian politics.

Zagorakis to leave New Democracy? Theodoris Zagorakis, a Greek New Democracy MEP (EPP), has threatened to get leave his party following the decision of the Professional Sports Committee (PSC) to expel the football clubs PAOK and Xanthi from the Greek championship. Sarantis Michalopoulos has the detail.

Expand 5G network. Economic Minister Margarete Schramböck of the conservative ÖVP says that spreading the 5G mobile network standard throughout Austria will be one of her priorities. Although the government has already pledged to invest €1 billion in tax money into the expansion, it could be assisted by a conglomerate of companies who announced their €4 billion in contribution to the project, if “investor-friendly conditions” are upheld, according to Thomas Arnoldner, the head of Telekom-Austria which is part of the conglomerate. (Philipp Grüll | EURACTIV.de)

Macron in Warsaw next week. French President Emmanuel Macron will travel to Poland next week on 3 February to meet Polish President Andrzej Duda and Prime Minister Mateusz Morawiecki in an attempt to boost diplomatic relations with a country that has opposed him on topics such as the rule of law and climate. “The choice of Poland for his first European trip in 2020 is important to clarify French positions on many European issues, to open new areas of cooperation with a major EU partner and to underline the need to protect European democratic values,” explained the French presidency. Read more on Euractiv.fr  (EURACTIV.FR)

N-VA, ca ne va pas. Just as informers Georges-Louis Bouchez (MR) and Joachim Coens (CD&V) are expected to present, yet again, their final conclusions on forming a federal government to the King on Tuesday, Socialist leader Paul Magnette (PS) has publicly drawn a line for all future attempts to have a government including both PS and Flemish-nationalist N-VA. “I don’t see any possibility of forming a government together with N-VA. Ca ne va pas,” said Magnette. “We respect the royal missions, but we have already had more than 30 meetings with the N-VA and it does not help.” (Alexandra Brzozowski | EURACTIV.com)

Forest industry hit by a strike. Some 9,000 workers went on strike after the employer organisation of the Finnish Forest Industries and the Paper Union failed to reach an agreement. Industrial action is planned to last three weeks.

And it appears as if short-term prospects for a solution are not promising. EURACTIV’s Pekka Vänttinen provides his analysis.

False publicity start. The government’s multi-million pound publicity campaign to prepare the public for leaving the EU has been heavily criticised by the National Audit Office. The watchdog said that although £46m was spent on the “Get ready for Brexit” campaign ahead of the UK’s expected departure at the end of last October, it was “not clear” it left people “significantly better prepared”.

The government can blame lawmakers for the confusion. The advertising campaign was halted three days before the UK was supposed to leave, after MPs voted to force another three month extension. (Benjamin Fox, EURACTIV.com)

Varadkar-Barnier meeting. The EU’s chief Brexit negotiator Michel Barnier sat down with Irish Taoiseach Leo Varadkar yesterday, as the two discussed the next phase of the UK-EU negotiations. But what did Barnier tell Varadkar? EURACTIV’s Samuel Stolton reports.

LUANDA LEAKS. Hacker Rui Pinto, who is awaiting trial on charges of alleged hacking and attempted extortion for exposing some of the world’s leading teams as creator Football Leaks, also delivered a hard drive containing information linked to the case of Isabel dos Santos, the daughter of Angola’s former president, who has been indicted on corruption and money laundering charges, to the Platform for Protection of Whistleblowers in Africa (PPLAAF).

Ana Gomes, a former MEP, on Monday (27 January) criticised the “double standards” of Portugal’s justice system regarding Pinto, the creator of the Football Leaks, demanding that the hacker have whistle-blower status. The Portuguese hacker is on trial in Portugal for illegal access to documents. Still, the country’s justice system has already agreed to collaborate with its Angolan counterpart, using documentation collected by Pinto to indict dos Santos.

Read more on this topic: For details about the explanations of Rui Pinto’s lawyers and Paulo Agostinho interviewed former MEP Ana Gomes

The agricultural sector needs to be protected. Spain’s main agricultural trade unions urged the governing coalition of socialists (PSOE) and leftists (Unidas Podemos/United We Can) on Monday (27 January) to take urgent measures to defend the sector, EURACTIV’s partner EFE reported.

EURACTIV’s partner EFE has the story.

So far, the Greek PM has focused on the issue of Turkey’s aggression in the Eastern-Mediterranean, migration and foreign investments in Greece. As Macron has strongly supported Greece in such matters, the Greek PM hopes Paris delivers a new and firm message against Ankara’s recent movements. EURACTIV Greece’s Theodore Karaoulanis has more.

Poland will buy F-35s. Polish Defence Minister Mariusz Błaszczak announced that on Friday  (31 January) he will sign a contract for 32 F-35A Lightning II fighter jets, worth $4.6 billion. Poland already has F-16 and MiG-29 jets, and F-35 will be the first of the most technologically advanced 5th generation aircraft.  (Łukasz Gadzała | EURACTIV.pl)

Fascism alert. “Fascism is still alive in our country, in our society. That is why it is very important to do everything in our power so that it does not rise to power,” said Slovak President Zuzana Čaputová during her visit to Auschwitz-Birkenau on the 75th anniversary of the concentration camp’s liberation. Far-right ĽSNS party currently ranks second in the opinion polls ahead of the February elections.

The president also said on another occasion that should ĽSNS win the election, she will talk to the party leader but stopped short of saying she would formally ask him to form the government. (Zuzana Gabrižová | EURACTIV.sk)

Resignation due to 5G auction. Head of the Czech Telecommunications Office Jaromír Novák resigned on Monday after the government postponed the auction of 5G frequencies in response to the European Commission raising objections due to competition concerns. Trade and Industry Minister Karel Havlíček admitted that the terms of the auction had to be changed because foreign bidders had expressed no interest, while there was just one bidder from the Czech Republic. (Aneta Zachová | EURACTIV.cz)

Why did Rosatom come here? Green opposition LMP will submit a demand for data of public interest to learn about the costs and consequences of Russia’s Rosatom State Atomic Energy Corporation relocating its regional centre to Budapest. This is so that it requests the parliament’s national security committee assesses the different risks linked to “Rosatom’s advances”, László Lóránt Keresztes said.

EURACTIV Croatia’s Željko Trkanjec looks into the geopolitical consequences of the relocation.

Péter Jakab elected Jobbik leader. Conservative opposition Jobbik has elected its group leader Péter Jakab as party leader. “While ideology remains important and Jobbik continues to define itself as a right-wing nationalist Christian and conservative party, we consider it very important to pursue politics that focuses on people and their everyday lives,” he said.

Jakab has been accused of anti-Semitism in Hungarian media after he blamed Jews for generating anti-Semitism for financial gain. He said that he is aware of his Jewish origins but has cited this background to qualify his statements about Jews and Israel. (Željko Trkanjec | EURACTIV.hr)

No other option “There’s no other option for Romania but to join the eurozone,” finance minister Florin Citu told the Digi24 TV news station, adding that the current calendar could be a little too ambitious. Romania plans to join the ERM-II mechanism in 2024, but it first needs to solve big imbalances in its public finances. Romania is running afoul to EU rules on government deficits with its budget deficit above 3% of GDP in both 2019 and 2020. According to Citu, the budget deficit will return below 3% of GDP in 2022. (EURACTIV.ro)

Prosecutor v president. Without specifying the reasons, Bulgaria’s new Prosecutor General Ivan Geshev asked the country’s Constitutional Court to give a precise definition of the term ‘treason’ and how investigators should proceed in case the president, who benefits from immunity under international law, had committed such a crime. President Rumen Radev insists on the accountability of the Prosecutor General himself. (dnevnik.bg)

Although the protests led to some injuries, two more officials were arrested on Monday of the empty dam – the former CEO of the Pernik water company and the former Pernik acting mayor. Former Ecology Minister Neno Dimov was arrested two weeks ago because of the water crisis and has resigned. (Krassen Nikolov | EURACTIV.bg)

Ready for snap elections. While the country’s business community welcomed prime Minister Marjan Šarec resigning his government, which they say lacked a coordinated political direction, the PM’s party LMŠ and DeSUS (pensioners party), as well as radical left Levica, are in favour of snap elections. Parties struggling public support such as SMC, SAB and SNS (radical left), are against snap elections.

But what will be next for Slovenia’s government? EURACTIV Croatia’s Željko Trkanjec reports.

Resignation? Health Minister Milan Kujunžić (HDZ, EPP) has submitted his resignation after being tied up in a scandal after media reports stated he had grossly misstated the value of a house he purchased in Zagreb.

Digital Serbia. Out of the total 7 million citizens in Serbia, roughly 5 million use digital services on their mobile phones, according to a survey conducted by TMG Insights. Although mostly used by younger people, men and women use digital services equally. The most used service is Viber (77%), followed by Facebook (68%) and Instagram (59%). (EURACTIV.rs)

2,000 “golden” citizenships. The programme for obtaining a Montenegrin passport through investments of special importance in the economic interest of Montenegro is limited to three years, until the end of 2021 and up to two thousand investors, writes daily Pobjeda. So-called economic citizenship can no longer be claimed by buying real estate, apartments and land in Montenegro, reported agency, Mina.  (Željko Trkanjec | EURACTIV.hr)