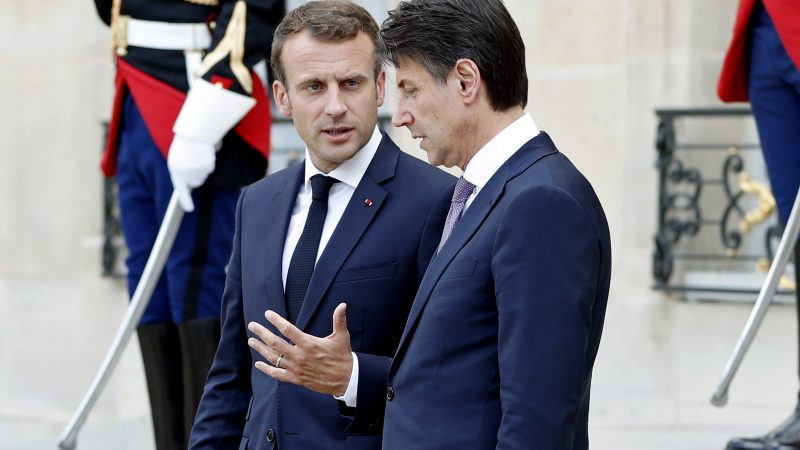 Emmanuel Macron and Italy’s Prime Minister Giuseppe Conte appeared to have found common ground on long-standing bilateral issues, overcoming the risk of another rift after the French president said Italy’s attempts to discuss national problems on the sidelines of an EU summit were “a waste of time”.

A bilateral meeting between the leaders of the Mediterranean neighbours was held at a Brussels hotel on Friday morning (22 March).

The meeting was requested by Conte, who said he had often contacted his French counterpart on Whatsapp in the past weeks, with promises to meet each other whenever there was an opportunity.

Sources from the Rome government said there were technical level talks first and then the two leaders had a 30-minute face to face, discussing also the high-speed rail link between Turin and Lyon.

According to French government sources, Macron and Conte discussed bilateral relations, cooperation on Libya and relations between the two countries and the EU and China.

“It was a fruitful and good meeting. On the Turin-Lyon we shared a method and we will report back to our respective ministers the outcome of the meeting,” said Conte, adding that the ministers will open a dialogue discussing the cost-benefit analysis of the project.

However, they did not discuss the redistribution of the project’s costs asked by Five Star Movement, Conte confirmed later in the afternoon.

“I’ve reminded Conte that we signed an intergovernmental agreement and we have international commitments that tie us and tie us to the EU. We cannot ignore this,” said Macron on the Alpine railways’ issue at the final press conference of the summit.

Conte also asked Macron to overcome the ‘Mitterand doctrine’, a policy that granted political asylum to several fugitive criminals sentenced for terrorist attacks in Italy in the seventies and eighties.

Macron seemed to open dialogue also on this point, Conte said, and the justice ministers of both countries will meet in the coming weeks to discuss it.

Before the meeting, the high-speed rail link issue risked inflaming the Italy-France spat again, as Macron hit hard at the Italian government upon leaving the first day of the European summit on Thursday (22 March).

Asked if the topic was on the agenda of the bilateral, Macron said that “France always has the same position, this is an Italo-Italian problem.”

He also added that other European topics, such as relations with China, industry and trade policies and the EU common future, are way more important than the national ones.

“I believe that any time someone brings domestic divisions to the European Council, it is a waste of time, and I have no time to waste,” he said.

After Friday’s meeting, Conte held a quick press point and justified Macron’s harsh reaction by putting the blame on the Italian reporters who he said were pressuring him.

“Macron explained to me that since he saw in Italy political forces taking diametrically opposed positions, he wanted to avoid being involved in an internal political debate and the pressure that you journalists were transmitting to him,” Conte told the press.

The ruling Lega and Five Star Movement recently almost triggered a government crisis because of divergent views on the Turin-Lyon high-speed rail link.

Most Five Star voters have always been against the Alpine link, as they consider it a waste of taxpayers money. However, Lega backs the projects and has struggled in the past weeks to avoid losing EU funds because of the delays in completing the connection.

Conte himself found a solution that actually bought the government more time and allowed it postpone the final decision after the EU elections in May.

But tensions between the two founding nations of the EU has never been so high.

Italy’s Deputy Prime Minister, Luigi Di Maio, recently flew with a Five Star Movement delegation to Paris to meet leaders of the gilets jaunes, a protest movement which openly calls for overturning the French government in its street rallies.

On 7 February, the French government summoned its ambassador to Rome for consultations, after ‘repeated attacks’ coming from the other side of the Alps.

In an interview with the Italian state broadcaster RAI, Macron attempted to defuse the tension.

“Our history and our friendship are stronger than our misunderstandings,” the French president said, adding that the dialogue with Rome was as essential for France as the one with Berlin.