Italy and Greece shuffle the cards in the Mediterranean 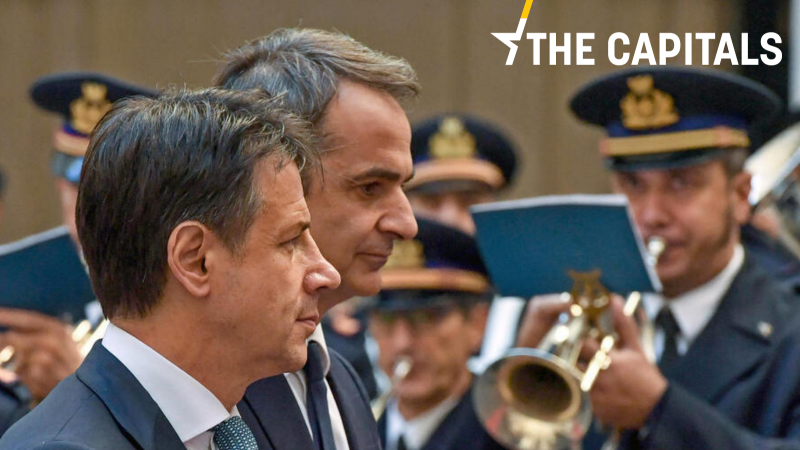 Athens is now eyeing a similar deal with Egypt, a move that will likely make the Mediterranean puzzle even more confusing. [ALESSANDRO DI MEO/EPA]

Before you start reading today’s edition of the Capitals, feel free to have a look at the article “MEPs back impact assessment for farmers in case of glyphosate reduction“, by Natasha Foote.

Now that many European countries have started lifting lockdown measures and opening borders, make sure you stay up to date with EURACTIV’s comprehensive overview, which is regularly updated with the help of our network of offices and media partners. Also, check our country update pages, such as the one for Spain and Slovenia.

Italy and Greece reached yesterday (9 June) a critical deal on demarcating Exclusive Economic Zones in the Mediterranean between them. Athens is now eyeing a similar deal with Egypt, in a move that will probably make the Mediterranean puzzle even more complex.

Why? Because in practice such a deal would cancel a controversial MoU on maritime zones recently signed between Turkey and the UN-backed Government of National Accord (GNA) in Tripoli, led by Faiez el-Serraj. Sarantis Michalopoulos has more.

Seehofer loses legal battle with the AfD. Yesterday (9 June), the German Constitutional Court in Karlsruhe weighed in on an on-going dispute between Interior Minister Horst Seehofer (CSU) and the far-right AfD. The country’s highest court ruled that Seehofer had violated the party’s right to fair political competition by publishing a critical interview on his ministry’s website back in 2018. EURACTIV Germany’s Sarah Lawton takes a closer at the interview.

COVID-19 crisis management. The Public Prosecutor’s Office in Paris is opening a probe into the French state’s management of the COVID-19 crisis, with possible charges including “manslaughter” and “endangering the lives of others”, Paris’ public prosecutor Rémy Heitz announced on Tuesday (9 June). EURACTIV France digs deeper.

Belgium likely to remove all Leopold II statues. After the global protests against police violence and racism sparked by the death of George Floyd revived the debate about the monuments of colonial King Leopold II in Belgium, the statues could be removed even without a successful petition. Alexandra Brzozowski has the details.

No more quarantine for returnees from Croatia. Travellers returning to Austria from Croatia (via Slovenia) will no longer have to undergo a mandatory 14-day quarantine as of 16 June at midnight, Croatian Prime Minister Andrej Plenković tweeted on Tuesday (9 June). This was confirmed by Austria’s foreign ministry.

This became a problem for Croatia`s holiday industry, as Austrian’s are the third-largest group of the country’s tourists. When it comes to the Italian border, a decision will be announced on Wednesday. (Philipp Grüll | EURACTIV.de)

Di Maio also said that any kind of restrictive measures against Italians such as self-quarantine were going to be phased out before the end of the month. EURACTIV Italy’s Alessandro Follis looks into what else Di Maio said.

A ‘new normal’ until a vaccine is found. The “new normal life”, as defined by Spain’s socialist Prime Minister Pedro Sánchez, will be in place, with reinforced health measures, until the coronavirus is defeated and a vaccine for COVID-19 is found, the Spanish government said on Tuesday, EFE reported.

Spain has extended for one last time the state of alarm that has been in place since 14 March, until 21 June. After that, Spain will no longer impose movement restrictions across the country and external borders will be lifted in July. However, Spanish citizens will have to wear masks in closed public spaces and observe “social distancing” measures, among others. Read more.

Row in EPP upper echelons over Fidesz. “Because of internal disagreement in the Committee on a common approach, it was me who proposed to end the work of the Committee,” said former European Council president Herman Van Rompuy, who chaired the panel tasked with evaluating whether Hungary’s ruling party, Fidesz, should remain in the political family.

Taiwan visit. Speaker of the Czech Senate, Miloš Vystrčil (ECR), announced on Tuesday (9 June) that he will be visiting Taiwan at the end of August. That is because his predecessor, Jaroslav Kubera, who had planned to visit the country, died of a heart attack in January 2020. Before his sudden death, Kubera had faced pressure from China to abandon the visit. EURACTIV.cz’s Aneta Zachová takes a closer look.

Opened borders. The government has cancelled compulsory quarantine in state facilities or via the app as it opened borders with all of its EU neighbouring countries on Tuesday as international transport, including air travel, starts to resume.

Also, anyone returning from 16 European countries deemed “safe” from an epidemiologic perspective, can move freely. From now on, wearing masks will be voluntary apart from in shops and in public transport. (Zuzana Gabrižová | EURACTIV.sk)

Emergency won’t end on 15 June. Bulgaria’s government will most probably decide to extend the state of emergency on Wednesday (10 June). But why? Find out here.

Mr and Mrs German Ambassador. The German embassy in Slovenia will from August be co-headed by Natalie Kauther and Adrian Pollmann, a married couple with three children, the 24.ur news website reported. It’s a unique example of co-sharing ambassadorial duties in high diplomacy, and a first for Slovenia as well.

In order to balance professional and family work, the two diplomats themselves proposed the division of labour to German Foreign Minister Heiko Maas. They will rotate in the top position every eight months, the website said. (Zoran Radosavljević | EURACTIV.com)

Safe Croatia. Prime Minister Andrej Plenković has introduced the official programme of his ruling Croatian Democratic Union (HDZ, EPP), which consists of 10 key points. Higher minimum wage, reduced number of government portfolios and digitalisation of public services are some of the promises the PM made to voters ahead of parliamentary elections on 5 July. EURACTIV Croatia’s Tea Trubić Macan examines the ruling party’s official programme.

UN Resolution on Kosovo has drawbacks, says Serbian president. While UN Security-Council Resolution 1244 establishing the UN Interim Administration Mission in Kosovo in 1999 has its advantages and disadvantages, no valid alternative exists or has yet been proposed by anyone, President Aleksandar Vučić told reporters in Nis on Tuesday.

The Serbian president made these comments during the 21st anniversary of the signing of the Kumanovo Agreement, which officially ended the NATO air campaign on the former Federal Republic of Yugoslavia. The resolution was adopted the day after. Read more.