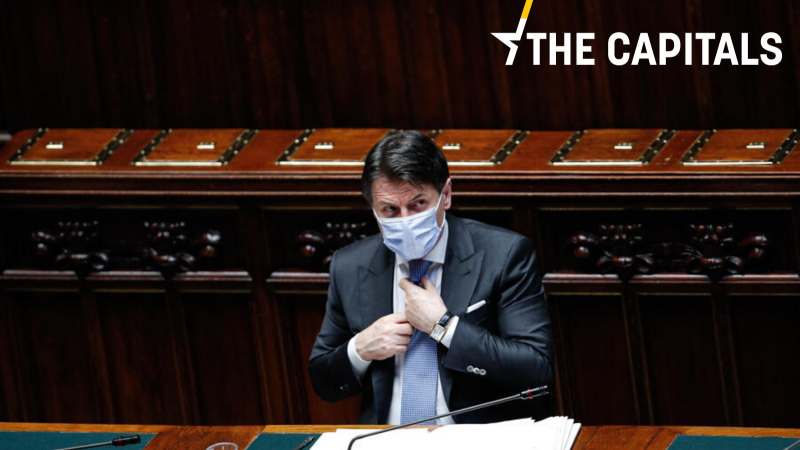 Before you start reading today’s edition of the Capitals, feel free to have a look at the article EU hits 10 countries with ‘voucher-gate’ legal action by Sam Morgan.

Italian PM delays decision on EU bailout fund, again. Italian Prime Minister Giuseppe Conte has deferred a decision on the use of the European Stability Mechanism (ESM) until “after the European negotiation on the Recovery Fund is finished”. EURACTIV Italy’s Alessandro Follis digs deeper.

German Bundestag signs off on basic pension. The German parliament finally approved on Thursday (2 July) the agreement promising a basic pension, which was reached by the CDU/CSU and SPD in mid-February.

The Bundesrat will vote on the law on Friday (3 July). If passed, the reform would benefit 1.3 million people with small pensions and would come into effect on 1 January 2021. EURACTIV Germany’s Sarah Lawton has the story.

Health reform postponed. Negotiations which started at the end of May between France’s health ministry and nursing trade unions that were supposed to reform hospital staff shortage and wages known as “Ségur de la santé” have failed.

Although the nursing staff have regularly been on strike over the issues, trade unions have said that the €6.8 billion proposed by Health Minister Olivier Véran are “not enough”. An announcement regarding the proposed reform will be made by President Macron on 15 July.

Far-right alters Congo monument in Brussels. The extreme-right Vlaams Belang has “restored” the Congo monument in Parc du Cinquantenaire in Brussels, by re-adding the French and Dutch words ‘Arabisch’ and ‘arabe’ back on the monument. Vlaams Belang senator Bob De Brabandere and MP Dries Van Langenhove said their actions aimed to protest against what they call “the current iconoclasm and apology cult.”

According to a press release, the party considers it a double standard that apologies are being asked today for what has been done in the distant past, “while at the same time remaining silent about the crimes that are still going on today.” (Alexandra Brzozowski, EURACTIV.com)

BBC swings the axe. One in six BBC England staff, a total of 450 jobs, will be made redundant as part of deep cuts to taxpayer-funded broadcaster’s regional television and radio services. EURACTIV’s Benjamin Fox reports from London.

The new programme will entail up to 30,000 voluntary tests per week, which will also be available to persons without symptoms who work in potential high-risk areas.

NATO endorsement crucial for the region. After NATO finally endorsed updated defence plans for Poland and the Baltic states, Lithuanian officials welcomed the step, calling it crucial for regional security, according to Baltic News Network.

This week, NATO closed the necessary endorsement process after striking a compromise with Turkey which was the only country blocking the plan. (Benas Gerdžiūnas | LRT.lt/en)

Spain lost 8 million tourists and €8 billion in May. The tourist sector, a mainstay of the Spanish economy, took a huge hit in May due to the COVID-19 pandemic. The country lost a total of 8 million tourists and more than €8.1 billion in May, according to fresh stats published on Thursday (2 July) by Spain’s National Institute of Statistics, EURACTIV’s partner EFE reported.

In April (the most critical phase of the pandemic) and May, Spain lost more than 15 million tourists. As tourists spend an average of €1,000 per person in the country, the total loss over the two months has been estimated at around €15 billion. Read more here.

In other news, the Spanish coalition government will hold an extraordinary meeting (Consejo de Ministros) today (3 July) to approve a special “economic package” to alleviate the impact of the crisis for the most vulnerable, official sources told EFE, without providing extra details.

Prime Minister Pedro Sánchez, the heads of the country’s main trade unions (among them Comisiones Obreras and UGT) and members of the business sector are expected to sign a new agreement to preserve, boost and protect the labour market, El País and EFE reported. (Fernando Heller | EUROEFE.EURACTIV.es)

State takes 72.5% of TAP airline. The Portuguese government announced Thursday  (2 July) that it had reached an agreement with the private shareholders of its national flag carrier, TAP. The government offered €55 million in return for which it will hold 72.5% of the company’s capital compared to the current 50%. “In order to avoid the collapse of the company, the government chose to reach an agreement for €55 million,” said Finance Minister, João Leão in a joint press conference with Infrastructure and Housing Minister Pedro Nuno Santos.

The government, led by Prime Minister António Costa, also approved on Thursday a resolution recognizing the public interest underlying the operation to support TAP with up to €1.2 billion. Lusa.pt’s Lucília Tiago has the details.

Suspicious business during COVID-19 outbreak. The National Headquarters against Organized Crime (NCOZ), which is in charge of examining purchases of protective equipment during the state of emergency, raided several private companies on Thursday (2 July) and requested documents from the ministry of health.

In recent months, the opposition drew attention to suspicious circumstances under which protective equipment, including facemasks, and respirators had been purchased since the coronavirus outbreak. For example, a company known as LA Factory sold protective masks to the ministry for 1.2 billion CZK (€50 million), although it had been almost inactive before the outbreak, and had no sales or employees, Aktuálně.cz wrote.

BUDAPEST
Hungary refuses to open its borders.  “With the exception of Serbia, we cannot yet fulfill the Union’s request to admit citizens from countries outside the EU, because that would be contrary to the health interests of the Hungarian people,” Prime Minister Viktor Orbán said on Thursday (2 July). The Council of the EU agreed on Tuesday (30 June) on a ‘safe travel list’ including 15 third countries from where travel to Europe will be possible from 1 July.
(Vlagyiszlav Makszimov, EURACTIV.com)

Slovenia takes three EU states off COVID-19-free list. Croatia, France and the Czech Republic will be taken off the list of safe countries as of Saturday (4 July), a government spokesman said, adding that, conversely, Belgium and the Netherlands will be added to the green list. The health ministry will also set up a system for serving mandatory quarantine decisions to incoming travellers at the border.

The COVID-19 infection rate in Slovenia is growing, with 21 new cases confirmed on Wednesday (1 July), related to imported cases from Serbia and Bosnia-Herzegovina, the public health institute has said. (Zoran Radosavljević | EURACTIV.com)

Data on COVID-19 pandemic unacceptably low. According to Rodoljub Šabić, a lawyer and Serbia’s former and first commissioner for information of public importance and Personal Data Protection, the availability of information on the government and Crisis Headquarters’ efforts to suppress the COVID-19 pandemic is worryingly and unacceptably low, and their current attitude is leading to more serious problems. EURACTIV Serbia reports.