Italy invites ‘everyone’ to the Libyan table 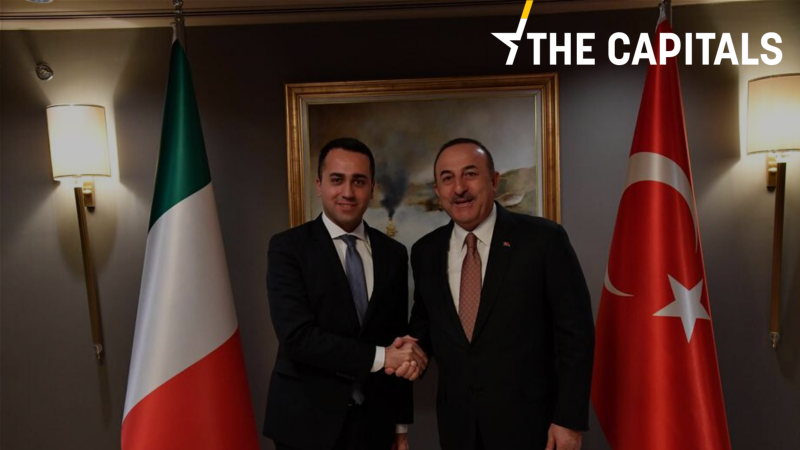 In the meantime, the foreign affairs ministers of Cyprus, Greece, Italy, France and Egypt will meet today in Cairo. [EPA/ ALESSANDRO DI MEO]

Before you start reading today’s edition of the Capitals, we invite you to read our Brief from yesterday “Time for EU socialists to leave behind ‘dinosaur era’”.

Also, feel free to have a look at the story Fidesz-PiS talks point towards potential exit from EPP written by Alexandra Brzozowski.

ROME. Partners like the US, as well as Russia, Egypt and Turkey are crucial to finding a solution to the Libyan crisis, said Italy’s foreign affairs minister Luigi Di Maio after a meeting with Turkish counterpart Mevlüt Çavuşoğlu in Istanbul.

“It’s important to maintain a relation with all the actors that can have an influence in Libya and then find a solution together,” he added.

In the afternoon, Di Maio told reporters in Brussels that countries are interfering in the Libyan civil war, turning it into a proxy war, but declined to answer whether he was going to address the issue of external interference at the meeting with Çavuşoğlu.

In the meantime, the foreign affairs ministers of Cyprus, Greece, Italy, France and Egypt will meet today in Cairo.

During a meeting with Greek PM Kyriakos Mitsotakis, Donald Trump refused to hold a joint press conference at the end of the meeting, and also avoided making any public statement against Ankara.

Gerardo Fortuna and Sarantis Michalopoulos have the story.

A different method for EU accession. During a meeting with Croatian Prime minister Andrej Plenković in Paris on Tuesday (7 January), French President Emmanuel Macron appeared to soften his tough stance on enlargement, saying he was open to changing the methodology under which EU accession is determined. For his part, Plenković urged Macron to unblock accession negotiations as soon as possible.

The French president also acknowledged the angry reactions from eastern member states following his refusal in October 2019, backed by the Netherlands and Germany, to open accession talks with North Macedonia and Albania.

‘New blood’ for the Grand Coalition? The head of the Christian Social Union (CSU) and Minister-President of Bavaria, Markus Söder, called for a cabinet reshuffle on Monday (6 January). He told the newspaper Bild am Sonntag ‘that we should rejuvenate and renew the government team by the middle of the year” and wants “new and fresh forces” to take on matters related to business and innovation. According to him, this would ensure Germany could better face competition from the US and China.

The suggestion was met with caution by German Chancellor Angela Merkel but backed by CDU party chief Annegret Kramp-Karrenbauer. But what would it mean for the stability of the Grand Coalition as a whole?

VDL meets Boris. Commission President Ursula von der Leyen is expected to talk up the prospects of an EU-UK trade deal in a speech at the London School of Economics following her first visit to the British Prime Minister in Number 10 Downing Street on Wednesday (8 January). Boris Johnson will underscore his desire to secure a trade deal with the EU by the end of December 2020 when the transition period that keeps existing rules in place ends. The EU has repeatedly warned that the tight time-frame limits the options of a new deal.

On Tuesday, Commission spokesman Eric Mamer said the meeting would “set the scene” for the next round of negotiations. (Benjamin Fox, EURACTIV.com)

New conservative-Green government set to become a climate pioneer. On Tuesday (7 January), exactly 100 days after the legislative elections, the new coalition between Chancellor Sebastian Kurz’s conservative ÖVP and the Greens agreed on a government programme. But with both parties unlikely to see eye-to-eye on every issue, how long is this unlikely pairing expected to last?

Sánchez re-elected in tight vote. Socialist leader Pedro Sánchez was re-elected on Tuesday (7 January) as Spanish prime minister by only two votes (167 in favour, 165 against). Together with left-wing party Podemos, he will lead the first coalition government in the country’s history since the Second Republic in the 30s.

Sánchez faces a difficult mandate ahead, as the liberals, centre-right and far-right parties offered staunch opposition during the parliament debate forcing him to rely on the Catalan pro-independence party and Basque separatists to pass the vote.

EURACTIV’s Jorge Valero explains why Sánchez will have a hard time.

EURACTIV’s Samuel Stolton has the story.

Dublin debate. CIRé, an association conducting and coordinating initiatives for refugees and migrants, has denounced measures targeting asylum seekers recently proposed by minister for asylum and migration, Maggie De Block (VDL), saying they have been wrongly presenting applicants as abusing the asylum system.

From Russia with rouble. Russians celebrate their Christmas around the New Year and for many the chosen holiday destination after Turkey remains their north-western neighbour, Finland. Extra trains are added to routes from St. Petersburg and Moscow to Helsinki and, for the Finnish hotel and leisure industry, the seasonal peak is significant.

But the numbers have been volatile in recent years, a telling indicator of changing consumer habits, the state of the Russian economy and the effect of EU sanctions.

Read the story of Pekka Vänttinen.

What’s next for Polish troops in Iraq? The training operations of Polish troops in Iraq were halted following the events that followed the US strike that killed Iranian top general Qassim Soleimani. Poland announced that it will “withdraw its troops from the country” if the Iraqi government decides that it no longer wants its support, but remains committed to staying in Iraq as part of its NATO mission. (Łukasz Gadzała | EURACTIV.pl)

Troops in Iraq. Slovakia has temporarily relocated its seven soldiers, who are part of the NATO training mission in Iraq. But the 40 Czech soldiers and police officers currently deployed in Iraq will remain there.