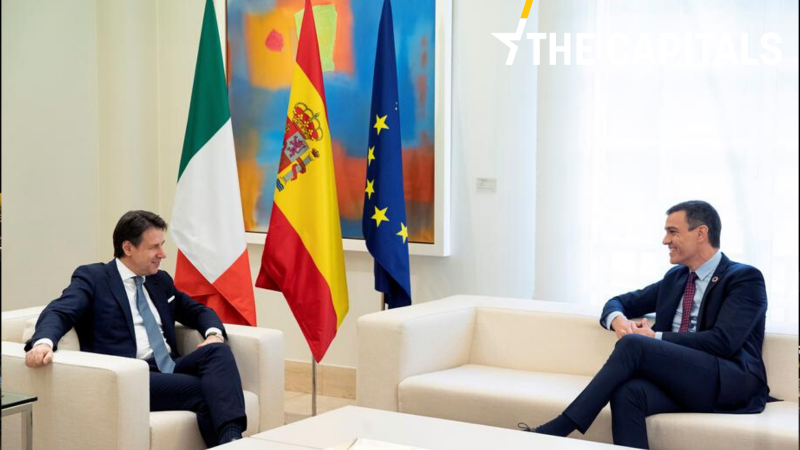 Before you start reading today’s edition of the Capitals, feel free to have a look at the article Putting all pieces together is Farm to Fork’s nitty-gritty written by Gerardo Fortuna.

Conte calls for EU Recovery Fund to be approved by July’s end. The EU Recovery Fund must be approved before the end of July, Italian Prime Minister Giuseppe Conte told a press conference after meeting Spanish counterpart Pedro Sanchez, adding that “we must be bold. The single market is in danger, it can be destroyed without a coordinated response by the EU as a whole.” EURACTIV Italy’s Alessandro Follis looks into the details.

Merkel in Brussels. German Chancellor Angela Merkel (CDU) laid out her priorities for Germany’s EU Council Presidency before MEPs on Wednesday (8 July) in Brussels. While she called for a “willingness to compromise,” MEPs were quick to criticise parts of Berlin’s programme.

Meanwhile, the CDU party will institute a binding quota as of 2025 to achieve gender parity in its executive board provided the party backs the plan at its conference in mid-December. The party’s Economic Council criticised the move claiming that Merkel, party leader Annegret Kramp-Karrenbauer and European Commission President Ursula von der Leyen, are proof that such a quota is unnecessary. (Sarah Lawton | EURACTIV.de)

New PM promises to increase justice budget. After announcing an increase in funds for healthcare workers the day before, France’s new Prime Minister, Jean Castex, decided on Wednesday (8 July) to do the same with the judicial public service whose “operating methods are at the heart of our priorities.”

While visiting the High Court of Bobigny (Seine-Saint-Denis) with new Justice Minister Eric Dupont-Moretti, he noticed the lack of means in the justice system and particularly the court’s dilapidated state. “A Republic like ours, especially here in Seine-Saint-Denis, presupposes that the public service of justice which serves all citizens is functioning as well as possible,” he said.

Confusions over new COVID-19 travel rules. Belgium will issue a formal travel ban to areas in the Schengen zone that have been put back in lockdown and are considered a high health risk area. However, the legal ramifications are still unclear and regions have announced their own drastic measures. EURACTIV’s Alexandra Brzozowski has more.

Bettel calls for government and citizen “responsibility”. “The collective effort and solidarity must continue”, said Luxembourg’s Prime Minister Xavier Bettel in a parliament address on the pandemic on Wednesday (8 July). “There has certainly been a lack of consistency in some decisions because at the beginning of the pandemic a lot that was not known. We had to adapt,” he added.

New restrictions on border crossings are already being considered by the government if the health situation does not improve.

New travel warnings and border controls for Eastern Europe. After issuing travel warnings as a reaction to the increased rate of COVID-19 infections in Eastern Europe, Austrian Foreign Minister Alexander Schallenberg announced on Wednesday (8 July) that restrictions would also apply to travellers from Moldova, Bulgaria and Romania, who would have to undergo a 14-day quarantine before entering the country. (Philipp Grüll | EURACTIV.de)

Finland’s faces EU’s slowest recovery. Economic growth in Finland in 2021 will be even slower than was predicted in spring as forecasts released by the European Commission this week predict that the Finnish economy will shrink by 6.3% in 2020 and for growth in 2021 to be a mere 2.8%, 0.9% less than in the previous forecast a few months ago. If the predictions are borne out, Finland’s growth would be the slowest in the EU. Read more.

Swedish economy shrinks. Sweden’s economy is estimated to shrink by 5.3% in 2020 and the country’s growth for 2021 is predicted to be only 3.1%, despite Sweden having adopted a less restrictive COVID-19 strategy than its Nordic counterparts as it had allowed businesses to remain open. (Pekka Vänttinen | EURACTIV.com)

SEAT urges more investment in e-cars. Spain needs to provide more incentives for e-cars, said the interim chairman of Volkswagen’s Spanish brand SEAT, Carsten Isensee, on Wednesday (8 July), adding that other EU member states such as “Germany, the Netherlands, Sweden and France are much more sophisticated in the willingness to prepare their countries in line with the Paris agreement to substantially reduce the CO2 footprint,” Reuters reported.

Although the Spanish government announced on 15 June a €3.7 billion aid package for the auto industry, including a €250 million scheme encouraging drivers to switch older cars for newer low-emission cars, as well as e-cars, Isensee said this was insufficient.

MP to block Centeno from becoming Bank of Portugal governor. Liberal Initiative MP, Cotrim Figueiredo, said on Wednesday (8 July) that he will issue an injunction to prevent the appointment of Mário Centeno as governor of the Bank of Portugal before the parliamentary legislative process on the issue is concluded. Lusa.pt’s Irina Melo looks at how Centeno responded.

Greek government exposed over COVID-19 awareness funds. Media group ALTER EGO has decided to return almost €1 million of public funds it received from the government as part of a campaign to raise awareness over the pandemic due to lack of transparency in the process of distributing the funds. EURACTIV’s Sarantis Michalopoulos has the story.

US to start Cyprus military training, defying Turkey. US Secretary of State Mike Pompeo said the US plans to conduct military training with Cyprus for the first time, defying NATO ally Turkey, which warned of destabilization. The cooperation will be part of the US International Military Education and Training program, which seeks to train foreign officers and increase friendly nations’ interoperability with the US military.

Turkey and the Turkish Republic of Northern Cyprus had warned against the end of the embargo, saying it would upset a balance of power on the island. Read more here.

High turnout expected in Presidential run-off vote. 81% of respondents to a poll conducted by Kantar said they would be willing to vote in Sunday’s presidential elections, while 53% said they would do so with a high degree of certainty, suggesting a high turnout. Current polls show that the two candidates are close to being tied.

Around 35% of Poles believe that if President Duda wins on Sunday the risk of Poland leaving the EU could increase, compared to 11% of those surveyed who believe his opponent, liberal mayor Rafał Trzaskowski, would be more dangerous for Poland’s EU membership.

Lower house backs record budget deficit. The Czech lower house has – thanks to the votes of the ruling and communist parties – approved on Wednesday (8 July) a budget deficit worthCZK500 billion (€19 billion) for 2020, the highest in history.

This is the third time MPs have voted to increase the original CZK40 billion (€11 billion) deficit since the start of the coronavirus crisis despite opposition parties criticising the government for not looking for areas where to save money. (Ondřej Plevák | EURACTIV.cz)

No second wave yet. While Slovakia recorded its highest daily increase of COVID-19 infections since April on Tuesday (7 July) with 31 new cases, the country’s Health Minister Marek Krajčí said this does not qualify as a second wave because the increase is not exponential and the cases and contacts were both localised and contained.

Meanwhile, the drug known as remdesivir was administered for the first time to a 39-year-old COVID-19 patient after which his condition had substantially improved. (Zuzana Gabrižová | EURACTIV.sk)

Romania hits new peak. On Wednesday (8 July), the number of confirmed coronavirus infections in the past 24 hours rose to 555, the highest daily figure since the start of the pandemic, public authorities confirmed. The previous peak was reached on 11 April (523 new cases), but then the country”s testing capacity was considerably lower than on Wednesday. EURACTIV Romania’s Bogdan Neagu has the story.

Meanwhile, the Romanian government announced that it does not intend to introduce new restrictions, Prime Minister Ludovic Orban has said, adding that the increase in COVID-19 infections is due to people not observing sanitary protection rules. The PM also said he hoped parliament would quickly adopt the quarantine law. Read more.

PM expects real economic crisis to hit next year. The real economic crisis will come at the end of this or the beginning of next year, Bulgarian Prime Minister Boyko Borissov predicted on Wednesday (8 July), as the European Commission predicted Bulgaria’s GDP to see a 7.1% drop in 2020. However, while more than 170 new daily COVID-19 cases were recorded in Bulgaria last week, the PM rejected, once again, the possibility of reinstating stricter measures.

Earlier, Health Minister Kiril Ananiev explained that some of the restrictions could be reinstated if daily infections exceeded the 200-threshold. “It is easiest for the government to close the country, but it will be difficult to learn to live and work with the virus. With no money for pensions and salaries, the state will fall apart,” said Borissov. (Krassen Nikolov | EURACTIV.bg)

New government rumours. Croatian Prime Minister Andrej Plenković has announced that he plans to shrink the size of his future cabinet and, according to the latest sources published by Euractiv Croatia’s media partner Jutarnji list, his crisis cabinet could have only 14 portfolios.

Interior minister’s fate still unknown. By the official deadline at midnight on Tuesday (7 July), the Slovenian parliament did not receive an official notification from Prime Minister Janez Janša about Interior Minister Aleš Hojs’ resignation, its speaker confirmed. While Hojs told reporters before a cabinet meeting on Wednesday that his fate was in the hands of the prime minister, with whom he hadn’t discussed the issue, Janša’s office has made no public comments.

Hojs resigned on 30 June because of surprise police raids on houses of several government officials, of which he had not been informed in advance. (Zoran Radosavljević | EURACTIV.com)

Fallout from anti-lockdown protests. Riot police forces dispersed demonstrators in Wednesday morning (8 July), ending the long, violent protest that began after Serbian President Aleksandar Vučić announced on Tuesday that Belgrade would possibly be under lockdown during the weekend in response to a growing number of COVID-19 infections in the capital. EURACTIV Serbia’s Vladimir Tintor provides a rundown of the events.

Also, the EU believes that restrictive COVID-19 measures introduced to curb the spread of the virus must not threaten fundamental rights and freedoms, including the right to peaceful protests, a spokesperson for the European Commission said on Wednesday (8 July). EURACTIV Serbia has more.