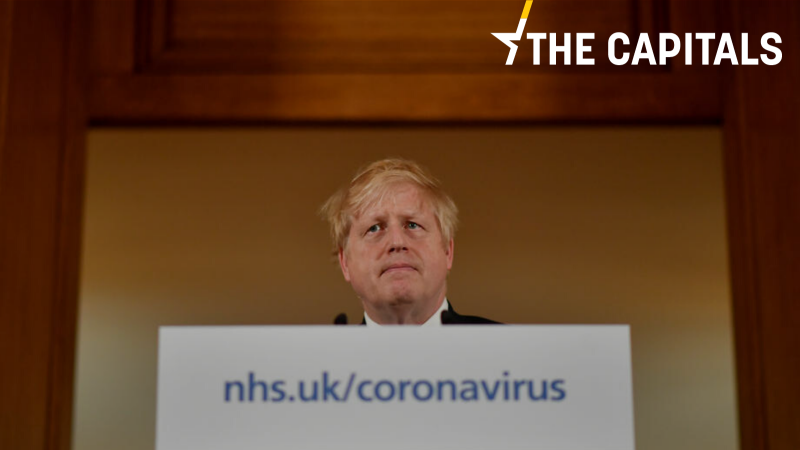 "If you don't do it responsibly... we will have to bring forward further measures," said Johnson. [EPA/LEON NEAL]

Before you start reading today’s edition of the Capitals, feel free to have a look at the interview with Nathalie Moll, the director-general of the European Federation of Pharmaceutical Industries and Associations (EFPIA): “Pharma boss: EU will have to focus on long-term medical research ecosystem”

“Scientists are working tirelessly to speed up the development of new vaccines and we will keep working with regulators in order to avoid delays. We estimate it is going to take 12-18 months at the minimum to have a registered vaccine on the market,” she said.

In today’s edition of the Capitals

All pubs, restaurants and cafes have been told to close but the government is concerned that too many people are not observing the rules of keeping at least two metres away from others, as Britons flocked to the coast and public parks at the weekend. EURACTIV’s Benjamin Fox reports from London.

Merkel in quarantine after being exposed to COVID-19. Chancellor Angela Merkel went into self-quarantine on Sunday evening after being in contact with a doctor who had tested positive for coronavirus, her spokesperson announced shortly after she held a press conference to present the new measures to fight the spread of the epidemic in Germany. Read the full story.

New restrictions will come into effect as of today (23 March) as Germany had surpassed the 20,000-mark over the weekend (24,227 as of 22 March), Merkel told the press conference on Sunday. EURACTIV Germany’s Sarah Lawton has the details.

Eight more weeks, at least. The Belgian lockdown could continue for at least the next eight weeks, health minister Maggie De Block told De Zondag. Asked about time estimations, De Block said: “That’s the million-dollar question! We are now heading towards the peak of the epidemic, after which the curve will descend. I think this situation will last for at least another eight weeks – it would be the normal curve”. She added that the estimate was based on what had happened in China and South Korea.

To stay in the loop with how Belgium is handling the crisis, check EURACTIV’s regularly updated country page. (Alexandra Brzozowski | EURACTIV.com)

China deal. The Irish government is in talks with the Chinese administration on a potential deal for COVID-19 equipment, Tánaiste Simon Coveney has said. “We have a contract now to spend over €200 million on personal protective equipment that’s going to come from China,” Coveney said, adding that the Irish airline company Aer Lingus will operate flights between Ireland and China to bring back the supplies.

Coveney also revealed that he had spoken to the Chinese ambassador over the weekend and is likely to talk to the Chinese foreign minister in the coming days. “We’re close to an agreement to get 100,000 test swabs from China every week for the weeks that are coming up,” Coveney said. (Samuel Stolton | EURACTIV.com)

Spain death toll jumps by over 30%, hospitals strained. The coronavirus death toll in Spain surged 32% on Saturday (21 March), bringing the total number of fatalities to over 1,300 just a week after the government declared a state of emergency. There were more than 300 deaths from Friday to Saturday and the number of patients hospitalised rose to 13,000, the health ministry reported on Saturday.

Greece joins lockdown club. The Greek government has decided to put the country on lockdown as the number of coronavirus cases reached 624. 124 patients are hospitalised, of whom 34 are intubated. “In Italy, unfortunately, one person is lost every two minutes. And the situation is getting worse everywhere in the world. So I am obliged to prevent our country from undergoing such a tribulation,” Greek PM Kyriakos Mitsotakis said. “But I will not allow a frivolous few to undermine the safety of most,” he added, referring to the Greeks who ignored the “stay home” rule.

In light of the lockdown, many Greeks decided to “get isolated” in their summer houses in the countryside, risking spreading the virus to the entire country. (Sarantis Michalopoulos)

Deaths up by 651, down from Saturday’s 793 record increase. Emergency Commissioner and Civil Protection Chief Angelo Borrelli said on Sunday that 5,476 people have died with the coronavirus in Italy, up 651 on Saturday. That was down from Saturday’s record daily increase of 793. Read more on ANSA.

Read here about the situation in Italy.

Facemask confiscation explained. A shipment of 100,000 facemasks, which were meant to be a gift to Italy from China but had been confiscated by Czech customs last week, will now be replaced by an equal amount of the country’s own facemask stocks and sent to Italy at the start of this week, Foreign Minister Tomáš Petříček told Czech News Agency on Sunday (23 March). Petříček plans to explain to his Italian counterpart that the seize had not been deliberate, as Czech officers made a move against an organised group suspected of fraud, which had ‘stolen’ the shipment. (Ondřej Plevák | EURACTIV.cz)

If you are interested in how the Czech Republic is dealing with COVID-19, read more here.

A new government in place, old crisis. Prime Minister Igor Matovič of the centre-right party Ordinary People was appointed by President Zuzana Čaputová to lead the new government on Saturday (21 March), and the new PM already took a jab at the previous government for having deliberately limited COVID-19 testing to push down the numbers of confirmed cases. EURACTIV Slovakia’s Zuzana Gabrižová has the story.

Travel restrictions. Bulgaria had 15 new cases of coronavirus on Sunday reaching in total 185, the national operations headquarters said. Of these, 30 are hospitalised while 3 people have died so far. The latest confinement measure, aimed at many Bulgarians who own holiday houses, is not allowing citizens to leave cities and towns. Over the weekend, many inhabitants of Sofia took to the nearby Vitosha mountain. At the insistence of the authorities, access to Vitosha was banned on Sunday.

Against this background, the prime minister and president, who announced a week ago that they are putting aside their differences in the face of the threat of the coronavirus, were back in conflict on Sunday. The president vetoed the Emergency Law by not accepting certain elements of it, including the restrictions on freedom of speech introduced with it.

Two parallel crises. “We have two parallel crises that contradict each other,” Prime Minister Andrej Plenković said after an emergency meeting of Croatia’s top officials. He referred to the novel coronavirus COVID-19 and the earthquake of a 5.5 Richter magnitude that hit Zagreb on Sunday morning (23 March), assuring the public that authorities had been managing the crisis well. EURACTIV Croatia’s Karla Junicic has more.

Make sure you stay up-to-date with Croatia’s response to the COVID-19 crisis by clicking here.

Romania asks EBRD for help with post-COVID strategy. The Romanian government asked for the European Bank for Reconstruction and Development’s support in building a strategy for economic development after the coronavirus crisis. “We want to be ready when the crisis ends, to see the directions in which the Romanian economy should go after this crisis,” Economy Minister Virgil Popescu told a news TV station. Popescu also said the government is already working on the second set of measures for supporting the companies affected by the coronavirus crisis. (EURACTIV.ro)

Vučić meets Orbán in Budapest. Serbian President Aleksandar Vučić met Hungarian Prime Minister Viktor Orbán in Budapest on Sunday (22 March) to discuss bilateral relations, cooperation and solidarity in the fight against coronavirus, as well as plans to support the economic development of both states once the pandemic is over. The ongoing migrant crisis and Serbia accession to the EU were also among the topics discussed between the two leaders, accompanied by Serbian Finance Minister Sinisa Mali and Hungarian Foreign Minister Peter Szijjarto, the Serbian presidency reported. Read more.

Kosovo government decides to gradually remove 100% tariff. The Kosovo government decided on Friday (20 March), in a vote held via email, to gradually remove the 100% tariff it had introduced on products from Serbia and Bosnia and Herzegovina, starting with raw materials and including all products as of 1 April. Gradual reciprocity in the relationship with Serbia will also start on 1 April. (EURACTIV.rs)