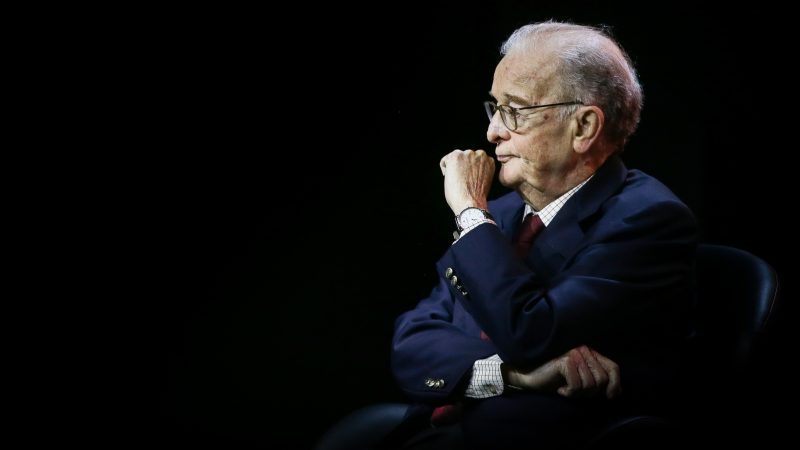 File photo. Former Portuguese president Jorge Sampaio, in Lisbon, Portugal, in January 2020,died on 10 September 2021 at the age of 81 in Lisbon with respiratory difficulties. [EPA-EFE/MARIO CRUZ]

Former Portuguese president Jorge Sampaio, who made national history in 2005 with an extraordinary use of his powers to dissolve parliament and oust an unstable majority government, died on Friday (10 September) at the age of 81.

The cause of death was not disclosed, though Sampaio had been hospitalized since 27 August with breathing difficulties.

After an uneventful first term in 1996-2001, the affable Socialist former lawyer won another five-year mandate that turned out to be more turbulent and showed the might of presidential powers in what is usually a ceremonial office.

Portugal loses a great leader. Europe loses a visionary. #JorgeSampaio leaves us with his legacy to fight injustice and trust that left-wing policies are the answer in times of struggle.

We mourn his departure and will continue his legacy. Até sempre, Presidente! pic.twitter.com/yDwMOGvsA8

With the budget deficit rising and Portugal teetering on the verge of recession, the Socialists lost a snap parliamentary election in 2002 to a centre-right coalition of the Social Democrats (EPP-affiliated) and the People’s Party.

In 2004, Sampaio’s refusal to hold an early election after José Manuel Barroso resigned as prime minister to lead the European Commission triggered fierce protests from left-leaning parties including the Socialists.

In an attempt to ensure political stability, he named another Social Democrat, Pedro Santana Lopes, as premier, only to conclude four months later that the new cabinet was not achieving the desired results and lacked overall credibility.

He used his presidential powers, often dubbed the Atomic Bomb in Portugal, to break up parliament and call new elections for February 2005, which brought the Socialists back to the helm under Prime Minister José Socrates.

In his biography, Sampaio told the author, Jose Pedro Castanheira, that he was “fed up with Santana Lopes as prime minister as he was leaving the country adrift.”

He was the only president to have ever used that power while a government with a parliamentary majority ruled Portugal.

“Jorge Sampaio was born and educated himself to become a fighter and his fight had a goal: freedom and equality,” current President Marcelo Rebelo de Sousa said in a televised address to the nation. “He proved that you can be born privileged and still dedicate your life to help the underprivileged.”

Rebelo de Sousa highlighted Sampaio’s fight for the end of Portugal’s dictatorship, which crumbled in 1974, for the independence of ex-colony East Timor and the rights of refugees.

Jorge Fernando Branco de Sampaio was born into a liberal middle-class family in Lisbon. As a child, he lived with his parents in the United States, where his father studied public health and later in England. He spoke fluent English.

He studied law at Lisbon University and in the 1960s the red-haired, bespectacled lawyer gained prominence defending political prisoners of the fascist regime of Antonio Salazar.

Sampaio first became politically active in the clandestine left-wing opposition. After the 1974 revolution that brought democracy to Portugal, he founded the Socialist Left Movement but soon abandoned the project and in 1978 joined the Socialist Party, becoming its Secretary General in 1989.

My deepest condolences to the family of former President Sampaio, a real defender of freedom and equality.

It’s a sad day for Portugal and for Europe.

Born under a dictatorship, he dedicated his life to the defense of democracy and the European values we all cherish.

He served as mayor of Lisbon in 1990-1995, abandoning the second term to run for president in the January 1996 election, which he won in the first round with almost 54% of the vote.

A fervent supporter of the Sporting soccer team, Sampaio had two children with his second wife Maria José Rita.