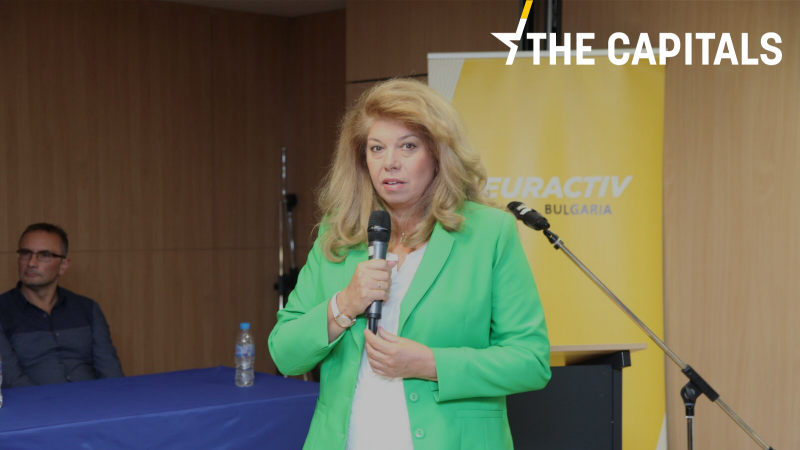 >>Before you start reading The Capitals today, take a look at EURACTIV’s Special Report on “How Europe can better tackle rising cancer incidence” in light of the new European Commission’s  ambitions for an EU-wide cancer plan.

European Commission President Jean-Claude Juncker sent a special video greeting on the occasion of the launch of EURACTIV Bulgaria in Sofia on Friday (20 September).

“It’s a real pleasure to join you today because this is an important day for EURACTIV and for Bulgaria. It is always good news when a new media is starting, having all the ambitions for a long journey. It is important for the Bulgarian public to know better what the European Union is about. What you are doing has nothing to do with propaganda for Europe or the Commission. Do your job the best way. Success!” the outgoing EU Commission chief said.

EURACTIV.bg was officially launched at an event at the European Union representation office in Sofia, in the presence of Bulgarian Vice President Iliana Iotova, a former MEP, as well as MEPs, diplomats, representatives of the administration, business, non-governmental organisations, media and other stakeholders.

“This media shows what is behind the official communiqué and manages to translate what is happening into the language of ordinary people. It really deserves congratulations because it’s not easy,” Iotova, a former journalist, said.

“With this huge wave of all false suggestions and fake news, of misleading messages also from politicians, this website has the advantage of telling the truth and that is the most important thing. Welcome. I think you have a new home in Bulgaria today,” Iotova told journalists from EURACTIV Brussels team who attended the event.

Journalist Svetoslav Terziev from the daily SEGA, EURACTIV Bulgaria’s media partner, said EURACTIV’s presence in Bulgaria was “great moral support, given the disastrous situation in Bulgaria in terms of freedom of expression”.

“The media crisis in Bulgaria is total. There is creeping media totalitarianism in Bulgaria. A project like EURACTIV Bulgaria is useful for the entire media environment”, Terziev added.

Relations with Podemos not broken. Spanish socialists are “very angry” with leftists of Unidas Podemos (United We Can, UP), after their leader Pablo Iglesias last week accused acting socialist PM Pedro Sánchez of “lying” to them in July, when they offered the party to be part of a coalition executive, PSOE’s spokeswoman in the Parliament, Adriana Lastra has said.

Spain will hold fresh elections on 10 November, after Sánchez failed to get the support of UP on Tuesday (17 September). The acting PM also failed to obtain the abstention of the conservatives of Partido Popular (PP) and of the liberal-centrists Ciudadanos (Citizens).

Lastra said on Saturday that the relations with UP are not broken, but she that there was “considerable anger” and “very big distrust” between the PSOE and UP after what she described as “blackmailing” strategy of Iglesias. (EuroEFE.EURACTIV.es)

Weber winks at greens. Manfred Weber, vice president of Germany’s CSU party, has described a potential coalition of the conservative CDU/CSU and the Greens as a model for the future. Together, both parties could “solve the social conflicts we have in Germany”, Weber told Welt am Sonntag. Future challenges will be about “environment and the economy, sustainability and competition, the social market economy and the way to combine the conservation of resources in an intelligent way.”

A government coalition with the Greens would be “exhausting”. However, according to Weber, the Greens had gone through a transformation, which would make cooperation possible. “The desire to shape, the desire to take responsibility, one feels all of that with the Greens.” Still, he called the ongoing criticism about the current coalition unfounded: “The Federal Government works and delivers.”

The Greens are currently present in nine of Germany’s sixteen federal states while coalition talks are ongoing in Saxony and Brandenburg.

Corbyn under pressure. The Labour leader Jeremy Corbyn came in for criticism by members of his party over the weekend, following calls for him to clarify his stance on Brexit.

Deputy leader Tom Watson, who on Saturday faced a challenge to his own position from members of Labour’s National Executive Committee (NEC), said on Sunday that Labour must use this weekend’s party conference to identify as a “Remain party” in the Brexit debate. Shadow foreign secretary Emily Thornberry agreed, saying the party must “say no” to leaving the EU.

Meanwhile, Corbyn has maintained an ambiguous stance on Brexit, suggesting that the UK could be better off outside of the EU, speaking to the BBC’s Andrew Marr on Sunday. (Samuel Stolton, EURACTIV.com)

Together wherever. The ruling centre-left Democratic Party (PD) and anti-establishment Five Star Movement will join forces even at the regional level. The two parties will present the businessmen Vincenzo Bianconi as a common candidate for Umbria’s presidential elections to challenge right-wing candidate Donatella Tesei, who is currently leading the polls. Leftist or centre-left parties have always ruled the Umbria region.

Orbán is back. In the meantime, Hungarian president Viktor Orbán was the special guest at the annual rally of right-wing Fratelli d’Italia party, member of the European Conservatives and Reformists (ECR). “Italy’s new government is separated from people,” he said, adding that the country is facing another attack from the European left. “My favourite quote? Have trust in God and keep the gunpowder dry,” he concluded amid applause. (Gerardo Fortuna, EURACTIV.com)

Pfizer expands to Thessaloniki. Prime Minister Kyriakos Mitsotakis held a meeting on Sunday with pharmaceutical company Pfizer’s board of directors, following its decision to set up one of its six digital hubs in Thessaloniki. “Creating the right environment for attracting investment is a top priority for the government”, Mitsotakis said.

He added that companies, in general, could take advantage of the know-how of Greek scientists specialising in digital technology. “Our country is capable of becoming a centre of excellence in the field of clinical studies,” Mitsotakis said.

New finance minister. Jerzy Kwieciński, currently the minister of investments and development, will add finance to his portfolio. As Poland does not have a minister of economy, and economic issues fall under the responsibility of a few different ministries, in theory, the ministry of finance should play a big role. In practice, however, oversight of the country’s economy is reserved for Prime Minister Mateusz Morawiecki. The nomination of Kwieciński is meant to appease fears of potential investors, as he is considered to be an apolitical technocrat. (Łukasz Gadzała, EURACTIV.pl)

Pro-life march in Bratislava. Approximately 50,000 people, according to organisers, took to the streets of Bratislava in what they called a ‘March for life’. Organised by the Catholic Church, the march promotes the abolition of abortion. Currently, there are four proposals floating among the political parties in the parliament differing in the level of restrictiveness on abortion. It is unclear if any of them will gain ground. In Slovakia, abortion is legal in the first  12 weeks of pregnancy. (Zuzana Gabrižová,EURACTIV.sk)

Czech MEPs’ take on EU Commission candidates. EURACTIV.cz has asked Czech MEPs about their view on the EU Parliament’s “grilling”. A difficult hearing probably awaits Lasló Trócsányi from Hungary, but according to an MEP, any candidate sent by Viktor Orbán would be controversial. Jan Zahradil (ODS, ECR) believes that the proposed executive vice-president Frans Timmermans could face a backlash as well. The Pirate Party’s Marcel Kolaja (Greens/EFA) believes it is not suitable for Czech candidate Commissioner Vera Jourova to overlook the rule of law and media plurality when she is connected to PM Andrej Babis, who owns a media house and is under investigation over an alleged conflict of interest, which he denies. (Ondřej Plevák, EURACTIV.cz)

Slovenian government will not save national airline. Two aircraft of the Slovenian flag carrier Adria Airways were confiscated at the end of last week because of debts owed to the leasing company. At the moment, Adria Airways owes €60 million, has declared €10 million losses and is looking for a strategic partner. But considering the recent problems, it would be a very difficult challenge. Croatia Airlines, the Croatian national airline, had been mentioned as a possible partner but it withdrew during this summer.

The Slovenian government announced it would not rescue Adria Airways from possible bankruptcy.

Fifth minister leaves the government this year. Iztok Purič, the minister for development and cohesion policy, has resigned for “personal” reasons. He is the second minister to leave this portfolio. Purič is a member of the small Party of Alenka Bratušek (SAB-RE) and a close ally of party president Bratušek. According to all polls, SAB will enter the new Slovenian parliament. (Željko Trkanjec,EURACTIV.hr)

SDP almost neck-and-neck with HDZ. HRejting, the biggest survey conducted by Croatian National Television (HRT), has put the two biggest parties in the lead: HDZ (EPP) enjoys the support of 27.6% of voters while socialist SPD (S&D) 24.8%.

While HDZ has remained stable, SDP’s rating has increased by more than 6.75% compared to May. Right now, only two more parties would pass the 5% threshold and enter the parliament: The Independent list of Mislav Kolakušić with 6% and Most (Bridge) with 5.1%.

Regarding the presidential elections due at the end of the year, HRejting suggests that Kolinda Grabar-Kitarović, incumbent president, will get 28.5% of the vote in the first round, Zoran Milanović (SDP) 24.8%, and Miroslav Škoro (independent) 18.2%. Grabar-Kitarović has lost 6.17% in the last four months, while Milanović’s popularity has increased by 6.27%.

Citizens against small hydropower plants. Another protest against the construction of small hydropower plants has been held in Belgrade. Ratko Ristić, Dean of the Faculty of Forestry, has said the economic need for them would not exist if the losses of the Electric Power Industry of Serbia were lowered by just two percentage points, from 17% to 15%. Previously, the Pirot city administration decided to delete the locations at Stara planina from the development plan, and introduce a moratorium on the construction of mini derivative hydropower plants. (beta.rs,EURACTIV.rs)