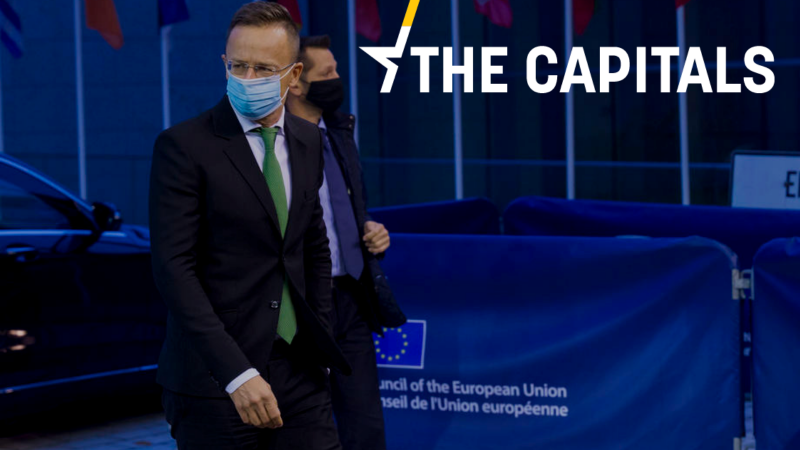 The foreign ministry said in a statement on Sunday that it “is deeply saddened that in this way official Budapest has brazenly confirmed its direct interference in the internal affairs of Ukraine and dealt an insidious blow to Ukraine's consistent efforts to constructively resolve the problems in Ukrainian-Hungarian relations.” [EPA/JEAN-CHRISTOPHE VERHAEGEN ]

Before you start reading today’s edition of the Capitals, feel free to have a look at the interview “Polish Ombudsman: ‘Rule of law has not applied to abortion in Poland’“, conducted by EURACTIV Poland.

Meanwhile, Hungarian Prime Minister Viktor Orbán led the charge in blocking the inclusion of “gender equality” from being included as a key theme for EU engagement with Africa in European Council conclusions of 16 October, according to 444.

Reportedly, a 40-minute debate erupted between EU leaders after Luxembourgish Prime Minister Xavier Bettel suggested changing “equality between men and women” to “gender equality,” which his Hungarian counterpart, backed by Czech Prime Minister Andrej Babiš, fiercely opposed, arguing the word “gender” is not used in Hungary for being over-ideologised. The final document did not refer to gender and instead made reference to previous Council conclusions from earlier this summer that did include the term. (Vlagyiszlav Makszimov | EURACTIV.com)

CDU leadership vote moved. The Christian Democrat CDU has postponed the party conference due to the coronavirus and with it, the vote for a new party leader and likely chancellor candidate. Originally planned for 4 December, the decision has been moved into 2021, leaving current leader Annegret Kramp-Karrenbauer at the helm during the start of the election year. Chancellor Angela Merkel confirmed she will not seek another term. Read more.

Tensions between France and Turkey continue to rise. Turkish President Recep Tayyip Erdoğan accused French President Emmanuel Macron on Monday of leading a “hate campaign” against Muslims. In a very virulent speech, the Ankara strongman said France is conducting “a lynching campaign similar to that against the Jews of Europe before the Second World War”, but this time against Muslims, following the French authorities’ reaction to the beheading on 16 October of teacher Samuel Paty who showed his class caricatures of Prophet Muhammad. Read more.

Scholars deem COVID-19 curfews unconstitutional. A lawyer and a science philosopher from the Vrije Universiteit Brussel will appeal to the Council of State to challenge the curfew in court, in the name of respect for the Constitution, Belgian media reported on Monday. Read more.

Northern Tory discomfort. A group of 50 Conservative MPs in northern England have called on UK Prime Minister Boris Johnson to offer a “clear roadmap” out of lockdown and have complained that the pandemic “has exposed in sharp relief the deep structural and systemic disadvantage faced by our communities”. Read more.

Government lobbied on DSA stance. The Irish government is coming under pressure from industry members to adopt a critical stance on the EU’s forthcoming Digital Services Act (DSA), the bloc’s most ambitious attempt to regulate the web for which the Commission will put forth the plans in December. Read more.

Think tank: Arms exports should be more transparent. Establishing a comprehensive picture of Finland’s arms export policies is difficult because the system is too dispersed, according to independent and security think tank Safer Globe’s annual report published on Monday. Read more.

Lithuania’s new conservative-liberal government to be. The second and final round of parliamentary elections in Lithuania concluded in the early hours of Monday. The conservative Homeland Union – Lithuanian Christian Democrats (TS-LKD) came in first, followed by the Farmers and Greens from the current ruling block. Read more.

Read also: How Baltics tried and failed to end war in Nagorno-Karabakh

No one happy with new COVID-19 decree. Italy’s new coronavirus decree that entered into force on Monday (26 October) and will last until 24 November has attracted criticism from politicians, associations and citizens alike. Read more.

Meanwhile, the foreign ministry recommended no travel abroad unless strictly necessary. The ministry underlines that, due to the increasing amount of infections in other countries, further travel restrictions cannot be excluded. (Alessandro Follis | EURACTIV.it)

Spain to claim 100% of EU Funds available. The Spanish government plans to claim the entire €140 billion available for Spain under the EU Recovery Fund, and not only the “non-refundable tranche”, as suggested by some Spanish media last week, socialist Prime Minister Pedro Sánchez confirmed in a virtual conference with the presidents of all Spanish regions and European Commission President Ursula von der Leyen on Monday, EFE reported. It was agreed in the EU Council last July that Spain would receive – likely in the first months of 2021 – around €140 billion from the EU Recovery Fund, of which 72.7 billion would come in the form of loans and the rest in loans and credits. Read more.

Egyptian President warns about Turkey and ‘wave of jihadists’. Egypt’s President Abdel Fattah Al-Sisi recently warned the leaders of Greece and Cyprus about a potential “wave of jihadists” in the wider region of the Eastern Mediterranean, as well as about the way Turkish President Recep Tayyip Erdoğan has engaged the Islamist terrorism in his plans. More.

Erdogan plans picnic at reopened Cypriot ghost town. Turkish President Recep Tayyip Erdoğan on Monday said he would visit on 15 November a beach resort sealed off for decades in northern Cyprus before it controversially reopened this month. Read more.

‘Rule of law has not applied to abortion in Poland’. A referendum on abortion under the current conditions in which the ruling party has unlimited possibilities for propaganda and debate in the public media, would not give room for real and in-depth discussion, Adam Bodnar, told EURACTIV Poland in an interview. Read the full interview here.

Night curfew and Sunday sales ban. The Czech government introduced new restrictions in order to slow down the coronavirus epidemic. As of Wednesday (28 October), night-time curfew will have to be observed and all essential shops that are still open will have to close at 8 pm and on Sundays. Read more.

Former prosecutor suspected of covering up murder plot against policeman. Head of Slovakia’s Special Prosecutor’s Office, Dušan Kováčik, has been suspended as prosecutor by the acting prosecutor general and was taken into pre-trial custody following the decision of a Specialised Criminal Court after his arrest last week.

Kováčik is suspected, among other things, of having undermined the investigation of a murder plot against a police officer of the National Criminal Agency, according to daily Denník N.(Zuzana Gabrižová | EURACTIV.sk)

Skopje ready for annex to treaty with Sofia. North Macedonia’s Prime Minister Zoran Zaev confirmed on Monday he was ready to sign an annex to the Friendship, Good Neighbourliness and Cooperation Treaty with Bulgaria. Although the prime minister considers the existing treaty to be excellent, he believes an annex would rule out misinterpretations. Read more.

In other news, the director of Sofia’s Regional Health Inspectorate Dancho Penchev has resigned after he met with Health Minister Kostadin Angelov. Penchev’s resignation came after the quarantine imposed on Prime Minister Boyko Borissov on Friday (23 October) was cut short on Saturday, following which Borissov was officially confirmed to be positive for COVID-19 on Sunday.

The Regional Health inspectorate only made two exceptions – for President Rumen Radev and Prime Minister Borissov – to the standard 10-day quarantine rules for those who came in contact with others who had COVID-19. On Monday, General Prosecutor Ivan Geshev tweeted that he also had to go into quarantine as someone in his family had tested positive for the virus. (Krassen Nikolov | EURACTIV.bg)

Domestic violence in Croatia increased by 50%. “The increase in domestic violence caused by the current pandemic and the consequent epidemiological measures is present globally and is due to movement restrictions, which make people stay home for a longer time, including victims of domestic violence, who have to stay with their abusers,” said parliamentary gender equality committee chair Marija Selak Raspudic, member of right-wing opposition party Most.

Raspudic warned about a worrying 50% increase in the number of crimes of domestic violence in the April-October period of this year, which increased from 511 to 752 compared to the same period of 2019.

In other news, the Croatian government reacted to EURACTIV media partner Jutarnji list’s article that suggested that Russian Foreign Minister decided not to come to Zagreb because Prime Minister Andrej Plenković did not want to meet him. “As soon as a meeting with PM Plenković was requested, it was confirmed to the Russian side that the PM would receive Minister Lavrov. The meeting was planned for 27 October,” the government’s press release said.

The statement also said that a large number of members at the Russian Embassy had tested positive for the coronavirus and that this prevented the embassy from participating in the visit’s final preparations and implementation, which prompted the Russian Federation to postpone it. (Željko Trkanjec | EURACTIV.hr)

Tax delays. Romania’s government adopted several fiscal measures to help companies and individuals hit by the coronavirus pandemic, including the possibility to delay tax payments until 25 December. The normative act also includes simplified procedures for debt restructuring, and a halt of foreclosures, among others.

Digital transformation and connectivity key for Western Balkans. Participants in the third Western Balkan Digital Summit currently taking place online from 26 to 28 October and hosted by the government of Albania, have highlighted the importance of digital transformation and connectivity for the countries in the region, especially in the context of the coronavirus pandemic. Read more.

Sanctions for BiH? Sanctions against Bosnia and Herzegovina (BiH) are looming because of the state guarantee issued in favour of Chinese Export-Import Bank for a loan from state electro-energy company Elektroprivreda BiH to ensure the construction of Block 7 at the Tuzla Thermal Power Plant, Barbora Poyner, communications officer at the Energy Community Secretariat, told Sarajevo daily Dnevni Avaz. Poyner explained that a hearing would be held on 6 November before the Energy Community Advisory Committee. (Željko Trkanjec | EURACTIV.hr)

Five Albanians repatriated from camps in Syria. Four children and a woman related to Albanian nationals who jointed Islamist extremist groups fighting in Syria and Iraq, are being repatriated from a Syrian camp, confirmed Albanian Prime Minister Edi Rama.

Repatriation was arranged after 12-months of negotiations, Edi Rama told The Associated Press in a telephone interview from Beirut, adding that his government also hoped to secure the repatriation of other Albanian nationals stuck in Syria in similar circumstances. (Željko Trkanjec | EURACTIV.hr)