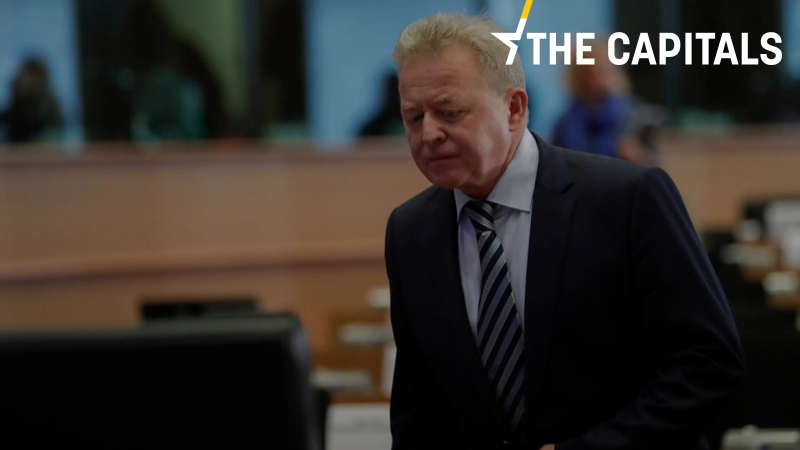 Before you start reading The Capitals today, take a look at EURACTIV’s story on the new Commission department dedicated to the defence and space industries. Loiseau: Without arms exports, there won’t be a European defence industry

**Later today EURACTIV will publish an interview with Petros Kokkalis, a leftist MEP (GUE-NGL), who spoke about the digitisation of EU agriculture and the role of the EU left. Stay tuned!

Last chance hearing. On Monday (7 October), MEPs from the committee of agriculture in the European Parliament decided that the written answers provided by Janusz Wojciechowski, the Polish candidate for EU agriculture Commissioner, to clarify his positions, failed to meet their expectations. This means that a so-called ‘last chance’ hearing will take place today (8 October) and ultimately determine whether he needs to withdraw his candidacy.

In Warsaw, the Prime Minister and the head of the ruling party, Jarosław Kaczyński, praised Wojciechowski. “Despite numerous attacks by the opposition, the agricultural portfolio is ours,” Kaczyński commented. He also made promises on public television (TVP) related to the agriculture portfolio, promising that his party would guarantee that farmers receive direct payments from the EU budget similar to what Germany gets. “It will be €278 per hectare or even more,” he added. The average direct payments for farmers in the EU are €259 per hectare, but there are also farmers in the EU who receive over €400 euros. Currently, Poles receive just over €200.

EURACTIV’s agriculture reporter Gerardo Fortuna recently wrote that in the first hearing in the European Parliament, Wojciechowski performed poorly overall. Wojciechowski spent most of his two-and-a-half-hour hearing on the ropes, taking successive blows from relentless MEPs, particularly when the Pole replied “I’m open to discussions” as a mantra to every technical question.

EU lawmakers wanted reassurance on particular topics like the Common Agricultural Policy’s renationalisation or how to support farmers in their transition to greener practices. But all they received were vague answers, which lacked the detail they were looking for. Read more

Additional questions to Goulard. MEPs from the committees responsible for Sylvie Goulard’s internal market portfolio sent her 11 pages of additional questions on both the substance of her position as well as her past activities. She needs to provide MEPs with answers by Tuesday night (8 September). If her answers do not convince MEPs, she will have to face the music and sit another hearing. Read more on EURACTIV.fr

Unanimously supported. Czech Commissioner-designate for Values and Transparency Věra Jourová received support from all the European Parliament committees related to her portfolio. It was expected that she would have to deal with tricky questions regarding the scandals of Czech PM Andrej Babiš, who made his fortune in media and the chemicals industry. But in the end, only Czech and Slovak MEPs raised questions about the controversial Czech PM.

When Czech MEP Jiří Pospíšil (EPP) asked her about Babiš’s statement on the bad state of the Czech justice system, she disagreed with the statement and showed fulls support for the Czech courts. She also made it clear that she would not investigate such claims if she were to obtain the Commissioner position. Therefore, Jourová went through the hearings swiftly and many Czech MEPs, regardless of their political affiliation, welcomed her performance.

Romania’s Commissioner puzzle. In Romania, PM Viorica Dăncilă confirmed the rumour spread last summer that she wanted to become a Commissioner. Dăncilă said she did not propose herself for the position because she wanted to continue with her colleagues and did not want “to breach their trust.” The JURI Committee of the EU Parliament rejected Romania’s first proposal, Rovana Plumb, due to the potential conflicts of interest, and the government in Bucharest sent two other names for consideration. However, the team of Commission President-elect Ursula der Leyen has not yet announced whether it agrees with either of the proposed candidates.

Climate row. Following massive criticism of the draft climate protection law, Chancellor Angela Merkel (CDU) has vowed for strict implementation of the climate targets. On Monday (7 October), Merkel rejected the accusation that her government weakened earlier compromise. The crucial monitoring of the targets for CO2 reduction by 2030 will be “crystal clear in the climate protection law”, she said, adding that “otherwise, I will not allow us to adopt it.”

The government’s climate protection bill has caused a storm of reactions from the opposition and environmentalists. The Greens spoke of a “declaration of bankruptcy” and leftist Die Linke of a “climate policy scandal”. They accused the government for weakening decisive measures that would enable Germany to meet its climate targets under the Paris Agreement. (Claire Stam | EURACTIV.de)

‘Gran coalición española’? Although Spain has no real “tradition” in forming coalitions like other EU countries (the bipartisan system socialists (PSOE) – conservatives (PP) has been the norm so far), some members of PP and PSOE have suggested the formation of a hypothetical “Great Coalition” (by the German “Grosse Koalition” (SPD/CDU-CSU)) to avoid a new political deadlock.

However, a PP spokeswoman said that such a scenario was off the table for the time being because of acting PM Sánchez’s political “surrender” before Catalan separatism and “self-humiliation” before those who support “the rupture of the constitutional order in Spain”.

On Monday (7 October), the PP presented its elections campaign slogan “Por todo lo que nos une” (For everything that unites us). The conservative party said they want it to be a message of “hope and union”, adding that it is the “only alternative” to unlock the current political stalemate in Spain.

Meanwhile, former socialist PM José Luis Rodríguez Zapatero has urged the political forces of the left camp to do everything they can to reach an agreement after 10 November “in any possible formula”. (Fernando Heller | EuroEFE.EURACTIV.es)

Invest south, or lose money. Italy will risk cuts in EU structural funds if an appropriate level of public investments is not maintained in the country’s southern part. In the last days, the European Commission sent a letter to Italy’s government asking which kind of measures the executive is expecting to put in place to reverse the trend of decreasing public investments in the Mezzogiorno region.

“I don’t know any other country in a weaker situation,” the Director-General for regional policy at the Commission, Marc Lemaitre, told EURACTIV’s partner ANSA. In case expenditure commitments with Brussels are not met, the Commission could also enforce a so-called “financial correction”, meaning cuts in structural funding. (Gerardo Fortuna| EURACTIV.com)

Ambitious budget. Following ten years of economic crisis and austerity-driven policies, the new conservative New Democracy government aims to boost growth. For this reason, the new 2020 draft budget focuses on lowering taxes. It provides business tax cuts from 29% to 24%, corporate dividend tax cuts from 10% to 5%, as well as an ambitious energy-saving and building renovation programme. “In order to fill the budget gap that he created himself, Greek PM Kyriakos Mitsotakis forgot the 4% growth he had promised, landing at 2.8%. But this is an over-optimistic prediction that no one else in the world could even imagine,” according to the leftist opposition, Syriza. (Theodore Karaoulanis |EURACTIV.gr)

The US backs Cyprus. Not only will international law be applied to the Cyprus Exclusive Economic Zone, but all countries must also acknowledge that “America always does what it needs to do to protect its business interests and its people,” US Secretary of State Mike Pompeo told Skai TV.

Eurozone budgetary instrument. Slovakia has welcomed the draft Regulation on a governance framework for the budgetary instrument for convergence and competitiveness for the euro area. In other words, they welcomed a proposal for a downscaled budget for the Eurozone that will be part of the Reform Support Programme. “Slovakia will defend the transparency of the processes and evaluation criteria as well as equal treatment of all member states”, the country’s finance ministry wrote in a preliminary position. (Zuzana Gabrižová |EURACTIV.sk)

First bankruptcy after Thomas Cook. One of the biggest and oldest Bulgarian tour operators, Astral Holidays, declared bankruptcy on Monday (7 October). The company was an intermediary for Thomas Cook in the country. “The domino effect from Thomas Cook’s bankruptcy has hit us too,” said the company’s CEO, Hristo Galbachev.

Analysts suggest that this will not be the only bankruptcy in Bulgaria which will follow the collapse of the world’s oldest travel agency. According to official figures, 58 Bulgarian hotels have to make payments from Thomas Cook. Losses for local businesses are estimated at approximately €25.5 million for the time being.(Krassen Nikolov | EURACTIV.bg)

Old faces in new places. Former PM Victor Ponta would like to govern again with socialist party PSD, after the dismissal of the Cabinet led by PSD’s president, Viorica Dăncilă. On Thursday (10 October), the parliament will hold a confidence vote against the socialists’ government, and Ponta expressed his hopes that the current executive will fall. But the founder of Pro Romania also said he would propose a new PM to his former colleagues in PSD, after the vote. Ponta, who served as PM while he was the president of PSD a few years ago, said he does not want to return at the government’s helm again. (EURACTIV.ro)

PM admits problems in the coalition. Slovenian Prime Minister Marjan Šarec (LMŠ-RE) acknowledged in the parliament that his coalition is facing difficulties, which could be “the beginning of its end” if no compromise is reached. There are five parties in the coalition, and it is difficult to reconcile them all, Šarec said, adding that “if there is no willingness for compromise, then one knows what the options are”. But he did not clarify whether that means a new coalition or even new snap elections. The Pensioner party (DeSUS) is facing domestic troubles, as vice president and former health minister Tomaž Gantar, left it. The reason is allegedly undemocratic activities of party leader Karl Erjavec. (Željko Trkanjec |EURACTIV.hr)

Incumbent president in trouble. Polls show that the popularity of Kolinda Grabar-Kitarović (KGK), incumbent president with the support of the leading party of the government coalition (HDZ-EPP), has dropped. Ahead of the presidential elections, that latest poll suggests that she will get 29.8% of the vote (30.2% in September), while Zoran Milanović (SDP-S&D) stands at 25.6% (25.5% in September) and independent Miroslav Škoro 19.1%.

Turkey wants a role in the Balkans. President of Turkey Recep Tayyip Erdoğan said in Belgrade that Serbia had an important role in the stability and well-being of the Balkans and that Ankara supported the Euro-Atlantic orientation of the region. Erdoğan, who is currently paying a two-day visit to Serbia (7-8 October), also said that he was trying to help the Western Balkans countries solve their problems. President of Serbia Aleksandar Vučić thanked Erdoğan for his stance that every solution for Kosovo, which could eventually be reached by Serbs and Albanians, was acceptable to Turkey. (EURACTIV.rs)