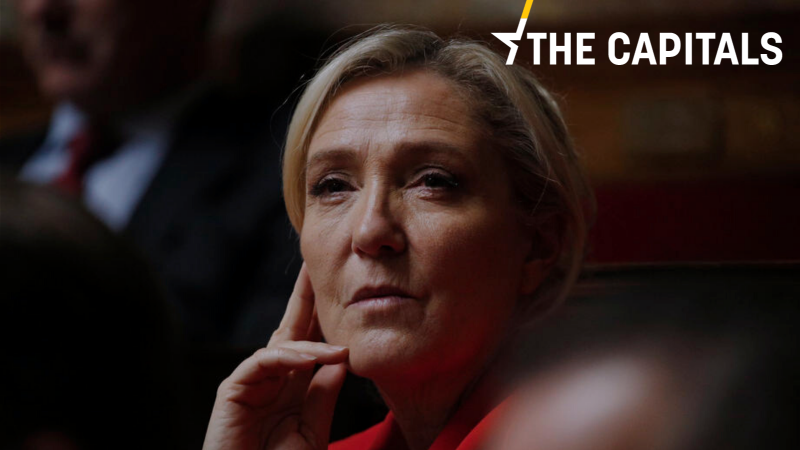 Before you start reading today’s edition of the Capitals, we invite you to read the article “Europe’s spy network kicks off in Zagreb“. The missing EU countries are Greece, Poland, Slovakia, Bulgaria, Ireland and Luxembourg.

PARIS. Does far-right leader Marine Le Pen read the news? Apparently not. Or she does, but distorts the truth.

Asked about the coronavirus, Marine Le Pen, the leader of the far-right Rassemblement National party, told France Inter on Wednesday that “the EU has not said a word in this matter”.

“So, we do not know what its objective is. The only thing it has done is to condemn those who would consider controlling borders, even temporarily. This proves the strength of the ideology, almost the religion of borderlessness, of the EU leaders,” Le Pen said.

EURACTIV France looks into why this statement is not only groundless but also opportunistic.

Constitutional Court overturns ban on assisted suicide. Germany’s highest court found yesterday (26 February) that a German law which had been in effect since 2015 and prevented doctors from performing and accepting payment from assisted suicide services was in breach of the country’s Constitution. While patients had to travel to Switzerland or to the Netherlands to undergo such procedures, the Court has now voided the law and found that the Constitution bestows upon citizens the right to take their own lives and to do so using the voluntary services of others. (Philipp Grüll | EURACTIV.de)

Siegfried Stieglitz was appointed in 2017 by then-minister Norbert Hofer (FPÖ), now head of the party. Shortly before and after his appointment, Stieglitz had donated €20.000 to the association “Austria in Motion”, which is now under investigation for secretly funnelling money to the FPÖ. After the public prosecutor demanded for Hofer’s immunity to be lifted, the party signalled readiness to comply. (Philipp Grüll | EURACTIV.de)

Bookseller’s sentence intensifies tensions with China. The diplomatic and political relations between Sweden and China have hit rock bottom after China sentenced bookseller Gui Minhai, a Swedish citizen since the 1990s, to ten years in prison. EURACTIV’s Pekka Vänttinen has some background.

Starmer still Labour frontrunner. Keir Starmer remains on pole position to win the Labour leadership contest, according to a new poll by YouGov and Sky News. Starmer would take 53% of members’ votes, enough to win on the first ballot, according to the poll, which sampled party members and affiliated trade unionists.

Lombardy governor in self-isolation. Governor of the Lombardy region, Attilo Fontana, has imposed self-isolation on himself after one of his close collaborators had contracted the coronavirus which originated in China and has started to spread across Europe. Fontana will be respecting the safety of his workers and follow instructions given, despite having tested negative.

Lombardy is Italy’s most affected region with 258 cases, less than 4% of which have come back positive, said the chief of Civil Protection Angelo Borrelli. (Gerardo Fortuna | EURACTIV.com)

€80 million to reduce emissions and close plants. The European Commission proposed on Wednesday (26 February) that Portugal close two thermoelectric plants and support the reduction of emissions from two petrochemical plants and gave the country almost €80 million to make this transition. The proposal comes from the Just Transition Fund, set up by the European Commission to support the dismantling of polluting industries and the decarbonisation of regions dependent on fossil fuels, under which €79.2 million are to be allocated to Portugal. (Ana Matos Neves, Lusa.pt)

Greece joins coronavirus ‘club’. A 38-year-old woman was reported as the first case of coronavirus in Thessaloniki, Greek media reported on Wednesday (26 February), as the virus continued spreading through Europe. Read more.

After Duda? The Leader of the ruling Law and Justice party (PiS), Jarosław Kaczyński, has said that “one can rule with the president from a different political party”, acknowledging, however, that “it would be difficult”.

This is the first time Kaczyński recognised that President Andrzej Duda could be defeated in the upcoming presidential elections in May, given that the other candidates are strong this time around. For now, the polls show that the three leading candidates are running close, with Władysław Kosiniak-Kamysz beating the incumbent president, despite the campaign only having started a few weeks ago. (Łukasz Gadzała | EURACTIV.pl)

Meet Igor Matovič, the next Slovak PM (maybe). A last-minute poll has predicted a clear victory of opposition movement Ordinary people and independent personalities (OĽaNO, member of ECR), in front of Smer-SD and fascist LSNS party in Saturday’s election. Funded by a crowdfunding campaign, the poll is covered by the moratorium in Slovakia and only landed in funders’ inboxes.

Its complete results were published by Czech Denik N and suggest the opposition parties would be able to form a coalition government. Reluctant at first, OĽaNO’s leader and fierce critic of government party Smer-SD, Igor Matovič, admitted that he will be a candidate for the prime minister post. (Aneta Zachová | EURACTIV.cz)

Babiš and Toman refused to meet with EP Budget Control Committee (CONT).  While MEPs from the European Parliament’s Committee on Budgetary Control (CONT) led by Chair Monika Hohlmeier (EPP) arrived in Prague yesterday (26 February) to check how EU funds are being spent in the Czech Republic, Czech Prime Minister Andrej Babiš and Agriculture Minister Miroslav Toman refused to meet them. The PM is still being prosecuted for EU subsidy fraud and his minister is alleged to have conflicts of interest when it comes to EU funds. (Lukáš Hendrych | EURACTIV.cz)

COVID-19 update: While there are still no reported cases of coronavirus in Hungary, two Hungarian citizens have contracted the virus abroad, the minister of the PM’s office, Gergely Gulyás, told a special press conference on Wednesday morning (26 February). Yet, the one patient currently in Austria confirmed that her test came back negative later that day, Index reported.

In other news, the European Commission acknowledged Hungary’s “robust economic growth” in its country report published on Wednesday (26 February) but pointed out that obstacles to long-term sustainable growth remain. EURACTIV’s Vlagyiszlav Makszimov has more.

Another COVID-19 update. Croatia confirmed its second coronavirus case yesterday, as the twin brother of the country’s first patient also tested positive for COV-19. Although he has only been experiencing mild symptoms that do not require medical attention so far, he and his twin brother are currently under quarantine in the hospital for infectious diseases in Zagreb. His girlfriend, who also came back from Italy this weekend, has tested negative. EURACTIV Croatia’s Tea Trubić Macan has more.

In other news, Finance Minister Zdravko Marić announced that Croatia had successfully fulfilled 19 measures in six different areas, which it has promised to carry out before officially entering the ERM II, the waiting room for joining the eurozone. Marić believes that the rest of the required measures will be fulfilled by the end of Croatia’s EU Council presidency.

At the same time, central bank governor Boris Vujčić explained that the Croatian banking sector is currently being evaluated, which was the ECB’s precondition for closer cooperation in the banking union. (Tea Trubić Macan, EURACTIV.hr)

In other news, interim health minister Victor Costache announced late on Wednesday (26 February) that a patient in Romania had tested positive for coronavirus. The man is a relative of an Italian citizen who visited Romania over the weekend and was found infected upon his return to Rimini. While about ten persons who came in contact with the Italian had been tested by the Romanian authorities, only one of the tests turned positive so far. (EURACTIV.ro)

European semester. Bulgaria’s growth prospects remain favourable but there is scope to further strengthen the overall resilience and competitiveness of its open economy, the European Commission said in its country report published on Wednesday (26 February), which has analysed the key socio-economic challenges faced by EU member states. While there has been steady GDP growth in recent years, it has fallen short of triggering a rapid ‘catching-up process’, as insufficient investments are holding back modernisation within the country’s economy. (dnevnik.bg)

Dacic proud to be the first minister to visit China, despite coronavirus outbreak.  Serbian Foreign Minister Ivica Dacic visited Beijing and met with his Chinese counterpart Wang Yi. Dacic told him that Serbian President Aleksandar Vucic was ready to participate in a summit between China and eastern and central European countries due to be held in China from 15-16 April.

Dacic also said he was proud to be the first foreign minister to visit China in these grave circumstances, the Ministry of the Foreign Affairs said in a statement, adding that his visit is a confirmation of the exceptional strategic relations and friendship made of ‘steel’, but also an indicator of Serbia’s solidarity and full trust that China will contain the “demonic disease,” dubbed as such by Chinese President Xi Jinping. (EURACTIV.rs betabriefing.com)

PM Kurti demands President Thaci’s dismissal over a secret agreement.  Kosovo’s Prime Minister Albin Kurti has asked for the dismissal of President Hashim Thaci, who in his capacity as prime minister signed in 2013 a secret agreement with NATO pledging that the Kosovo Security Force (KSF) would only undertake a mission in northern Kosovo “with prior concurrence from KFOR.”

Kurti published the letter along with an opinion on Wednesday (26 February), stating that President Thaci had seriously violated the Constitution. Kurti emphasised that he does not intend to deploy the KSF in the northern part of the country. (Željko Trkanjec | EURACTIV.hr)