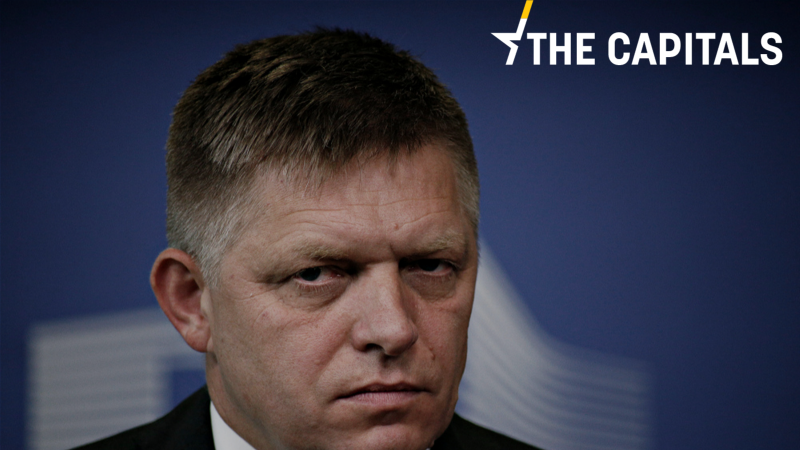 Former Prime Minister Robert Fico insisted on Monday: “Smer-SD has nothing to do with Gorilla”. [Shutterstock]

Before you start reading The Capitals today, take a look at yesterday’s Brief on the power-play between the EPP and Emmanuel Macron that runs underneath the surface.

Slovakia has been shaken by a recording from 2014, which attests that the former Prosecutor General Dobroslav Trnka was corrupt and intimidated by the controversial businessman Marian Kocner.

Trnka is still a prosecutor at the Office of the General Prosecutor, while Kocner is being detained over allegations of large-scale financial frauds and the 2018 contract killing of the journalist Jan Kuciak. The recording was released on Monday (14 October) by the daily Dennik N and came allegedly from Kocner’s cell phone confiscated by the police.

In the 70-minute conversation, the businessman treats prosecutor Trnka as his subordinate and issued death threats against him. The reason is that after his mandate as Prosecutor General ended in 2011, Trnka attempted to blackmail Jaroslav Hascak, the CEO of the oligarchic group Penta, with the recording of the eavesdropping known in Slovakia as ‘Gorilla’. Gorilla is supposed to prove that Penta corrupted public officials in the 2000s.

In the recording published on Monday, Kocner says Hascak already paid him for the original of the recording of Gorilla. Albeit still ongoing, the investigation of Gorilla has never made it to the courts. Hascak has denied he purchased the Gorilla recording and keeps questioning its authenticity.

Although Trnka and Kocner are known to be historical allies of the ruling Smer-SD, the party’s Chair and former Prime Minister Robert Fico insisted on Monday that the “Smer-SD has nothing to do with Gorilla”. But Prime Minister Peter Pellegrini, Vice-Chair of Smer-SD, proposed on Monday to change the law so that it allows to hold individual prosecutors more accountable and to curb the competences of the Prosecutor General.

The current Prosecutor General Jaromir Ciznar has said he cannot force Trnka to resign from the prosecutor’s office unless he is indicted. The police said it is processing the case. As for Kocner, he is about to be charged for contracting the murder of Jan Kuciak, while leaks from his personal archive keep discrediting his allies who work in law enforcement and are members of Smer-SD.

Don’t play in Istanbul. Italy’s Sports Minister Vincenzo Spadafora sent a letter to the European Football Association (UEFA) asking if it is appropriate to play Champions League’s Finale in Istanbul next May in light of the Turkish actions in Syria. “I hope that UEFA can make the brave thing to do and demonstrate, once again, that sports are an instrument of peace,” the minister wrote.

On the Greek side, Athens and Nicosia are satisfied with the Council of Ministers’ decisions against Turkey for illegal drilling in the Cypriot Exclusive Economic Zone.

Cypriot Foreign Minister Nikos Christodoulides said he was pleased that “the Foreign Affairs Council today unanimously decided to institute sanctions against natural and legal persons responsible for or involved in the unlawful actions of Turkey within the Exclusive Economic Zone of Cyprus.”

However, in Sarajevo, Bakir Izetbegović, leader of the largest Bosniak Party of Democratic Action (SDA), backed Turkey’s military operation against the Kurds in Syria, claiming that Turkey was “forced” into it. But Bakir’s father Alija, former leader of SDA, allegedly said before he died that he was leaving BiH as “amanet” (testament) to Erdogan.

German banks in trouble. According to this year’s bank barometer conducted by the consulting firm EY on Monday (14 October), 68% of financial institutions expect the economic situation to deteriorate, while 5% expect an upswing. In the previous year, 67% still believed in the improvement, and just 2% were pessimistic. “The situation in the German banking sector has deteriorated considerably in recent months,” said Robert Melnyk, head of the EY banking business. (Claire Stam | EURACTIV.de)

Nine Catalan politicians and activists have been sentenced to up to 13 years in prison by Spain’s Supreme Court on Monday (14 October), for their involvement in a banned referendum in 2017, amid strong reactions coming from separatists.

Ahead of the general elections, which are set to take place on 10 November, analysts predict that the volatile political situation in Catalonia following the developments is likely to have an impact on voters, EURACTIV’s partner EFE reported. (Fernando Heller | EuroEFE.EURACTIV.es)

Budget spat. Italy’s government postponed the cabinet’s meeting to finalise the draft budgetary plan, as anti-establishment party Five Star Movement (M5S) and centre-left Democratic Party (PD) have not been able to clinch a deal yet. They still disagree on the quota 100, the early retirement system, which was the previous government’s flagship measure, which Matteo Renzi’s Italia Viva and PD now want to scrap. (Gerardo Fortuna, EURACTIV.com)

The negotiations on a Brexit Withdrawal Agreement have been painfully slow and often rancorous, but ministers have always insisted that the rights of EU nationals living in the UK will be protected. In August, recently installed Prime Minister Boris Johnson said he would “repeat unequivocally” the government’s guarantee to them. Benjamin Fox has the story.

However, in the Senate, where the opposition put forward a joint list, it managed to beat PiS with 51-49 narrowly. This means that the opposition will be able to slow down the legislative process and check some nominations of the ruling party.

In addition, greater fragmentation in the parliament will not help PiS as it lacks potential coalition partners. Moreover, both the left and the far-right will try to shape the national debate over many issues, potentially promoting their ideas and weakening PiS’s influence.  (Łukasz Gadzała | EURACTIV.pl)

Only €48 million for the presidency. The Czech government approved a €48 million budget for the upcoming EU presidency in the second half of 2022. The budget was proposed by PM Andrej Babiš and Finance Minister Alena Schillerova (both ANO, RE) but faced criticism from their coalition partners, the social democrats.

Foreign Minister Tomáš Petříček (ČSSD, S&D) criticised the plan as insufficient. “The reputation of the Czech Republic and the promotion of our interests are at stake. To run the presidency we will have fewer people than Malta,” Petříček tweeted. (Aneta Zachová  |EURACTIV.cz)

Media under threat. In recent years, the independent media, their journalists and publishers have been subject to constant pressure and repression by the Public Prosecutor’s Office leadership. In this way, this key public institution sets the tone for complete intolerance of dissent, independent media and their investigations, according to the co-publisher of Dnevnik and Capital Ivo Prokopiev. (Dnevnik.bg)

Bulgaria blames Turkey for failing to comply with the EU common market rules for promised state aid to Volkswagen. Particularly, Sofia says Turkey promised a large number of funds to VW, including the guaranteed purchase of part of the car factory’s production.

Kovesi gets Council’s go-ahead. The EU Council has formally agreed to appoint Laura Codruta Kovesi, the former head of Romania’s anti-corruption directorate DNA, as the first head of the European Public Prosecutor’s Office. Kovesi only needs the EU Parliament’s definitive to greenlight to get the post, but this is just a formality, as MEPs have been Kovesi’s most fervent supporters, and backed her even when the Romanian government lobbied against her nomination.

Another round. President Klaus Iohannis is holding another round of consultations with parties before appointing a new prime minister. Iohannis will most probably select the leader of PNL (centre-right, EPP) to lead a minority cabinet after the dismissal of the socialist government last week. (EURACTIV.ro)

Read also: Romania’s centre-right to push for Muresan as Commissioner after government collapses

Unjustified ECJ delay. “I do not know the reasons for the delay; they can be quite banal but also substantive. Since the reasons are unknown, I cannot comment on the delay”, said Miro Cerar, Slovenian Minister of Foreign Affairs.

The ECJ told Slovenian agency STA that the decision about its jurisdiction on the border issue between Croatia and Slovenia would not be announced on 6 November but on 11 December, without explaining the reasons of the delay. Ljubljana hopes that the ECJ, through this decision, will force Croatia to implement an international arbitration ruling on the border between the two EU member states. The Permanent Court of Arbitration in The Hague has said that Slovenia should have “uninterrupted access” to the international waters in the Adriatic Sea. Zagreb has said it is not valid because Croatia withdrew from the arbitration process in 2015, following the leaking of a recording in which a Slovenian judge on the panel exchanged confidential information with the Ljubljana government. (Željko Trkanjec |EURACTIV.hr)

Parliamentary and presidential elections together? After HDZ (EPP) and coalition partner HNS (RE) threatened to leave the government following its request for bigger salaries for teachers, some other members of the coalition have started to follow suit. Rumours suggest snap parliamentary elections could be held together with the presidential vote in December. Even some HDZ members view this scenario in a positive light, although at this moment, the elections would benefit opposition SDP (S&D) that is very close to HDZ, according to polls. The main obstacle is the Croatian EU presidency that starts on 1 January. Prime Minister Andrej Plenković is not ready to gamble: he wants to have a successful Presidency and use it to support his party’s bid for the regular parliamentary elections in the fall next year. (Željko Trkanjec |EURACTIV.hr)