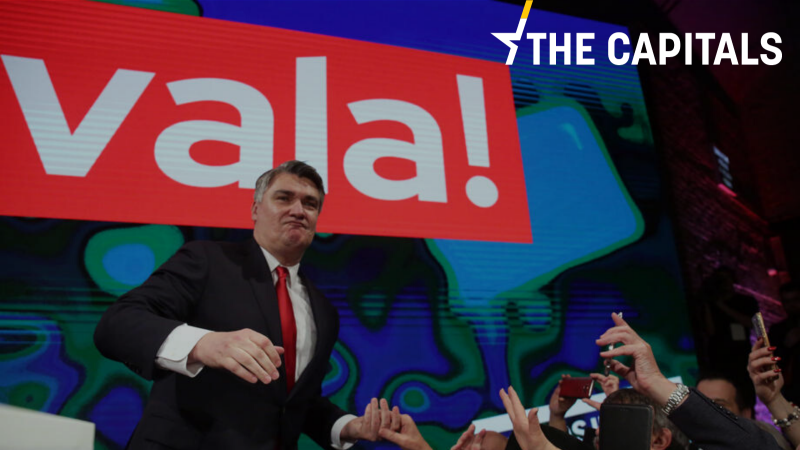 Before you start reading today’s edition of the Capitals, we invite you to read Alexandra Brzozowski’s story “Europeans brace for fallout from Soleimani killing“.

Also, feel free to have a look at the articles of EURACTIV journalists about the main challenges the EU will be faced with in 2020 in several policy sectors (Agriculture, energy and environment, digital, transport, global politics, defence, economy and health): 2020 Lookahead.

The result is a major surprise at the start of Croatia’s first EU Council presidency and makes the future of the current PM Andrej Plenković and his HDZ party (EPP) uncertain. Milanović (SDP, S&D) won 52.7% over Grabar Kitarović’s (HDZ, EPP) 47.3%. She ends her term in office in February.

“Now begins a war in the party, with everyone against Plenković,” HDZ sources told EURACTIV’s partner Jutarnji List daily.

Croatia’s president cannot veto laws but has a say in defence, foreign policy, and intelligence matters and is generally seen more as a moral authority and upholder of the constitution.

Tea Trubić Macan from EURACTIV Croatia has the story.

Have Austrian Greens made concessions on social issues? The conservative party (“ÖVP”) and the Green party have agreed to form a government led by Chancellor Sebastian Kurz (ÖVP) which will be inaugurated on 7 January, exactly 100 days after the election. But the government program has caused controversy since its presentation on Thursday, especially among Green supporters, as the Green party appears to have sacrificed some of its principles.

Philipp Grüll has the story.

Growth despite strikes. French Finance Minister Bruno Le Maire is confident about the French economy despite the recent strikes. Growth should reach 1.3% in 2020, the same as 2019, he told the Journal du Dimanche, though shop owners are already worried about weak sales.

Labour ‘could campaign’ to rejoin EU. Jess Phillips is the first Labour leadership candidate to say that the party could campaign to rejoin the EU at the next election, as she became the latest to confirm her candidacy to replace outgoing party leader Jeremy Corbyn at the weekend.

Benjamin Fox has the story.

New year, new polls? After 225 days, there is still no federal Belgian government in sight. Flemish PM Jan Jambon (N-VA) said although new elections would not solve the current stalemate, it does not mean his party excludes the possibility if coalition talks continue to flounder.

If they were to take place, “polls show that extremist parties, in particular, would benefit”, said the party’s spokesperson, Anne Laure Mouligneaux.  Observers, however, told EURACTIV that no major progress can be expected before 13 January, when informants Georges-Louis Bouchez (MR) and Joachim Coens (CD&V) are scheduled to submit their report to the King, as the “ideological gap between PS and N-VA remains too wide to bridge”. (Alexandra Brzozowski | EURACTIV.com)

Stormont hopes. Irish and British governments will release a text this week aimed at establishing the basis for an agreement to restore the Northern Executive and Assembly, Ireland’s Tánaiste Simon Coveney has said. Speaking to the Irish Times, Coveney also said that his government would provide funds to help Stormont get back on its feet, as well as investing in collaborative projects between Northern Ireland and Ireland.

Samuel Stolton has the story.

Is the EU’s diplomatic mission to Libya a no-go? After an airstrike on a military school in the Libyan capital Tripoli that killed at least 30 cadets on Saturday, the status of the expected EU diplomatic mission to Libya, strongly solicited by Italy, has been cast into uncertainty. The mission was announced by the internationally-recognised Government of National Accord (GNA) but when EURACTIV asked the Commission on 28 December to confirm the mission, an EU Spokesperson replied: “At this stage, I have nothing to announce in this regard.”

What is next? Gerardo Fortuna has the story.

Crucial Mitsotakis meeting with Trump in Washington. Days after the signing of the EastMed pipeline deal between Israel, Cyprus and Greece, and amid a new Middle East crisis, Greek PM Kyriakos Mitsotakis is visiting Washington for official meetings with the US administration. According to government sources, the PM’s visit aims to highlight Greece’s fundamental role for the stability of the Balkans and Eastern Mediterranean and show that Athens is the most reliable US ally in the region.

Will a joint press conference take place? EURACTIV.gr’s Theodore Karaoulanis has the story.

Finnish EU Presidency: The Judgement Day. Finland wrapped up its EU presidency at the end of the year and the verdict is in. Unsurprisingly, some observers put more emphasis on the mild success, others on the failures in making progress. There was no lack of ambition, the country was aiming at the moon in six months.

What were the successes and failures? Pekka Vänttinen reports from Helsinki.

The candidate of the Left? After months of uncertainties, Włodzimierz Czarzasty, one of the leaders of the New Left, said Robert Biedron should be their candidate for the presidency in the May elections. The final decision will be made by the party’s board. Other candidates include incumbent Andrzej Duda, TV personality Szymon Hołownia, Władysław Kosiniak-Kamysz, leader of PSL (EPP) and Małgorzata Kidawa-Błońska, leader of PO (EPP).

At the same time, Grzegorz Schetyna, a long-time leader of the Civic Platform, the biggest opposition party in Poland, said he is not running another term as the party’s leader. Tomasz Siemoniak and Borys Budka are most likely to take over from Schetyna after internal party elections. (Łukasz Gadzała | EURACTIV.pl)

Hateful inscription. The mosque in Brno, the second biggest city of the country, has been vandalised with the sign “Do not spread Islam in the Czech Republic! Otherwise, we will kill you”. Czech PM Andrej Babiš condemned the attack yesterday (5 January) after Respekt magazine asked for his reaction. However, he responded only via Twitter and two days after the incident took place. The hate crime is currently investigated by the police.

The number of Muslims in the Czech Republic is estimated at around 22,000 (0.2% of the population). In the last few years, the level of immigration was very low despite the migration crisis. According to Eurostat, the number of immigrants per 1,000 inhabitants is the fifth-lowest in the EU. (Aneta Zachová |EURACTIV.cz)

Gas benefits. Bulgaria expects a near 50% increase in revenues from the transit of Russian gas after the construction of the Turkish Stream pipeline on Bulgarian territory is finished. The country is now earning €125 million annually from Russian gas transition and is expecting an increase of up to €206 million by the end of the year. Bulgarian Prime Minister Boyko Borisov is invited to Istanbul on the 8 January for Turkish stream’s opening ceremony with Turkish President Erdogan and Russian President Putin.

New Year’s surprise – fertility treatment not yet free. Fertility drugs and injection treatments were to become free with prescription starting on 1 January, minister for family Katalin Novák said on 19 December. This contradicted the prime minister’s instructions published in the state’s official journal on the same day, which referred to the introduction of the new policy from 1 July.

Novák, however, seemed to confirm the 1 January date in a radio show three days later. On the first days of the year, however, Hungarians attempting to get the drugs for free at the pharmacies discovered they still had to pay.

Social democrats in opposition. The Social Democratic Party (PSD), which lost power in October 2019 after a no-confidence vote, is preparing its own censure motion against the centre-right government formed by the National Liberal Party (PNL, a member of the EPP). PSD leader Marcel Ciolacu said the PSD would call a no-confidence vote in the next parliamentary session, starting in February, after the controversial decision of the government to take responsibility for the budget law, a procedure that avoided parliamentary debates on the 2020 budget. (EURACTIV.ro)

Vučić gives up Christmas visit to Montenegro. Serbian President Aleksandar Vučić said he would not visit the north of Montenegro for Orthodox Christmas as he had previously promised.

Following a meeting with Patriarch Irinej of the Serbian Orthodox Church, the president said the authorities in Montenegro might use his visit to interpret it as an attack against the independence and constitutional system of Montenegro. Vučić met with Serbian Patriarch on 4 January to discuss the situation in Montenegro after the passage of a new Religious Freedoms Act. (EURACTIV.rs)