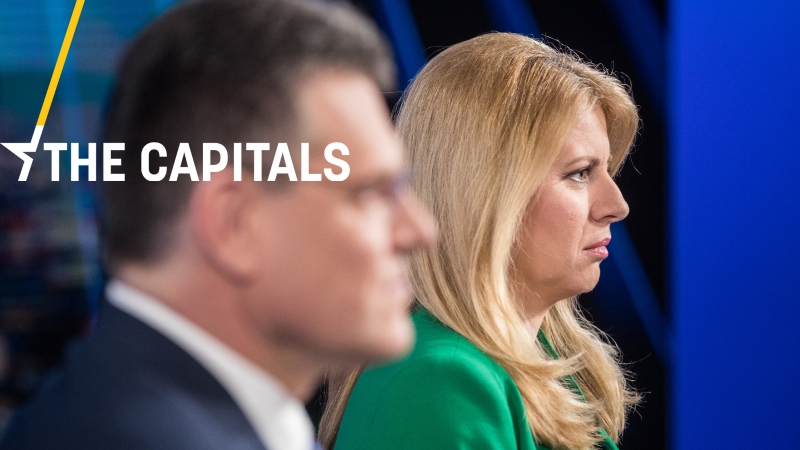 Anti-corruption candidate Zuzana Čaputová won the first round of Slovakia’s presidential election on 16 March with more than 40% of the votes and will face off against socialist Maroš Šefčovič (SMER-SD) in the second round.

Čaputová, a lawyer from the liberal Progressive Slovakia party, will be Slovakia’s first woman president if she beats Šefčovič, who scored 18.7% after taking unpaid leave from the European Commission.

A poll conducted before the first round for TV Markíza suggested that Čaputová would win the second round against Šefčovič by 64% to 36%.

Čaputová became known thanks to her long-standing legal fight against a plan to build a huge landfill site which involved businessman Marian Kočner, who has been charged with ordering the murder of investigative journalist Jan Kuciak.

Although lacking a strong foreign policy profile, Čaputová has backed more EU integration in foreign and economic issues. Regarding the refugee relocation quota, an issue that has taken centre stage in the public debate, she recently told EURACTIV.sk that she did not support this measure but that there should be more solidarity between EU member states.

Šefčovič, on the other hand, has repeatedly distanced himself from the European Commission decision about the relocation of asylum seekers, and from the €250,000 fine for those countries which refuse to apply it.

Šefčovič also highlights his conservative Catholic orientation and accuses Čaputová of representing a “super-liberal” agenda. According to him, the second round should be a “referendum” on issues like adoption rights for same-sex couples, which Čaputová supports but says she has no plans to push forward if elected. (Zuzana Gabrižová, EURACTIV.sk)

Lib Dem resurrection: The outgoing leader of the Liberal Democrat party, Sir Vince Cable, has said that it’s only his party that can be trusted to represent the millions of people who voted to remain part of the EU. “Whatever happens in the next few weeks of parliamentary twists and turns, we must argue – since no-one else can be relied upon to do so – that none of the several mutually exclusive versions of Brexit on offer – soft or hard – are as good as the deal we currently have,” he said. “We are remain,” he said.

Sir Vince is stepping down in May following the UK local government elections. Deputy leader Jo Swinson is currently the favourite to replace him. (Samuel Stolton, EURACTIV.com).

Article 7 review: The EPP’s EU elections top candidate, Manfred Weber (CSU), is seeking a new mechanism to review the ‘Article 7’ procedure used against Poland and Hungary. It is like “one very large gun, which is less accurate and difficult to use,” wrote Weber in the weekly “Frankfurter Allgemeine Sonntagszeitung” (FAS). (EURACTIV.de)

Climate demonstrations beat Yellow vests: More than 100,000 people participated in a massive climate march on Saturday in Paris while yellow vests only managed to have 32.000 people in the whole country, causing damage in the centre of Paris. President Macron made an emergency return from a ski-break while Prime Minister Edouard Philippe is due to announce new security measures on Monday to deal with violent extremists.

A non-Socialist to lead socialists: For the first time ever, Socialists have named a non-socialist to lead their EU election list, Raphaël Glucksmann from centre-left Place Publique. The party is keen to open the list to other movements besides Place Publique. But for the moment, polls suggest it will struggle to elect more than 5 MEPs. (EURACTIV.fr)

Kaczyński launches gay rights attack: On Saturday, ruling conservative Law and Justice (PiS/ECR) held its 2nd convention ahead of the EU elections. Its chairman Jarosław Kaczyński criticised the newly established European Coalition’s politicians of being “progressive” towards gay rights. “Warsaw vice president (Nowoczesna/ALDE) made it clear: it’s not about tolerance but about affirmation of single sex relationships, their marriages and adopting children. Hands off from our kids!” he said.

Latin America in Greek politics: Bolivian President Evo Morales’s visit to Athens and his contacts with PM Alexis Tsipras leftist government triggered an angry reaction from the Greek opposition regarding the foreign relations of ruling party Syriza, including their stance on Venezuelan government of President Maduro. (Theodore Karaoulanis, EURACTIV.gr)

Thousands march in Madrid for Catalan independence: With the motto “Self-determination is not a crime. Democracy is choosing” over 50,000 people marched in Madrid on Saturday (16 March) backing the independence of Catalonia. They protested against the ongoing trial against the political leaders behind the organisation of the referendum and a unilateral call for the independence of Catalonia, who face up to 30 years of prison. (Beatriz Ríos – EURACTIV.com).

Ruling party reveals its candidates for EU elections: MEP Dita Charanzová will lead the EU elections’ list of the ruling ANO party together with her colleague Martina Dlabajová (both ALDE). Third on the list is economist Martin Hlaváček, former deputy Minister of Agriculture who dealt with the Tobacco Products Directive (TPD). His role has been controversial, as when the TPD was negotiated, he left the ministry and started working for tobacco giant Philip Morris as a lobbyist. (Aneta Zachová, EURACTIV.cz)

Romania should be ‘proud’ of having a chief EU prosecutor: Manfred Weber, the Spitzenkandidat of the EPP, said he was surprised that the Romanian government is not supporting the candidacy of Laura Codruta Kovesi as the EU’s chief public prosecutor, Agerpres news agency reported. At an EPP summit in Bucharest, Weber said Romania should be “proud” of the first-ever chief European prosecutor being a Romanian citizen. (EURACTIV.ro)

List for the EU elections: The Bulgarian Socialist Party (BSP) has decided that journalist and MP Elena Yoncheva will lead its list for the EU elections. The other candidate was the President of the Party of European Socialists, Sergey Stanishev. By picking a non-partisan candidate, the leader of the party, Kornelia Ninova, and the BSP Executive Bureau wanted to boost their support in the upcoming elections. It is still unknown which place in the list Stanishev will take. (Dnevnik.bg)

Strong support for government: A new poll has found that 60% of citizens think that the government is performing successfully, with the leading coalition LMŠ party (ALDE) topping the poll with 28%. Main opposition centre-right SDS (EPP) would get 13.7% of the vote, according to the poll. (Željko Trkanjec, EURACTIV.hr)

Picula takes the lead: The Social-democrats (S&D) announced their list for the EU elections placing MEP Tonino Picula as their leading candidate. The party hopes to secure three MEPs. However, polls suggest they will win only two,  which, analysts say, could cause turmoil in the party. (Željko Trkanjec, EURACTIV.hr)