Lithuania backs Warsaw in rule of law dispute with Brussels 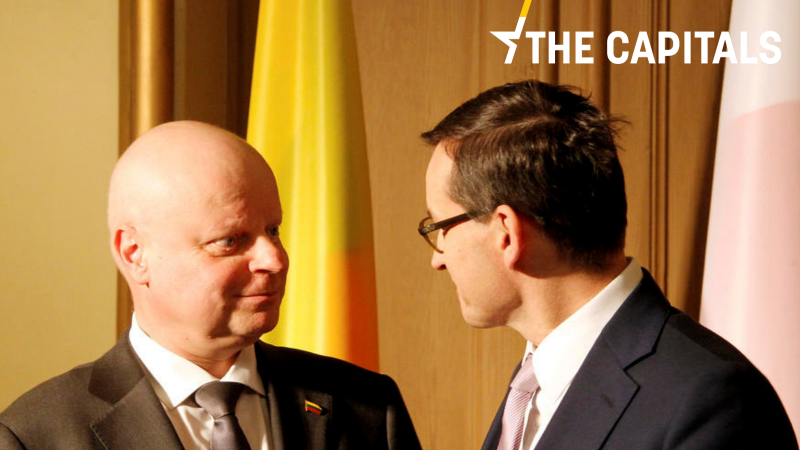 Before you start reading today’s edition of the Capitals, feel free to have a look at the article Poor investment in digitising health hit Europe back with COVID-19 written by Sarantis Michalopoulos.

Also feel free to have a look at our latest editions of the Global Europe Brief and the AgriFood Brief.

Skvernelis and his Polish counterpart, Mateusz Morawiecki, held a joint government meeting in Vilnius on Thursday (17 September), the first since 1989 Polish-Lithuanian intergovernmental consultations, which Skvernelis called a historical event in Lithuanian–Polish cooperation. Read the story here.

Formal apology to gay service members. German defence minister and CDU party leader Annegret Kramp-Karrenbauer issued a formal apology on Thursday (17 September) to gay members of the armed forces. With a new study called ‘Between Taboo and Tolerance,’ the Bundeswehr aims to examine systematic discrimination between 1955 and 2000, when being gay could result in summary dismissal.

“I very much regret the practice of discrimination against homosexuals in the Bundeswehr, which stood for the politics of the time. I apologise to those who had to suffer from it,” said Kramp-Karrenbauer. (Sarah Lawton | EURACTIV.de)

Belgium’s iconic beer and fries threatened by climate change effects. The production of two of Belgium’s most famous products, beer and fries, could be severely affected by the effects of climate change in the country, a new report commissioned by the National Climate Commission warned on Thursday (17 September).

In other news, Brussels’ Mini-Europe park will close its doors at the end of the year due to lack of agreement on a fourth extension with Brussels Expo and the economic situation as result of the COVID-19 pandemic, the management announced on Thursday (17 September) according to media reports.  (Alexandra Brzozowski, EURACTIV.com)

Infection record. The Netherlands has seen a record number of new Covid-19 infections in 24 hours for the third day in a row, as the country approaches 100,000 infections since the start of the virus. Between Wednesday and Thursday, 1,756 new cases of Covid-19 were confirmed, according to reports. (EURACTIV.com)

New measures amid rising COVID-19 cases. New coronavirus restrictions, which include limiting private indoor gatherings to ten persons, making mask wearing mandatory at outdoor fairs and markets, as well as allowing only 10 people per table in restaurants, will come into force on Monday (21 September), the government announced yesterday.

The announcement comes after Austria saw an increase in infections and hospitalisations over the past week, which prompted Germany to declare Vienna a risk zone on Wednesday and Denmark to do so for the whole country. (Philipp Grüll | EURACTIV.de)

Biden warns Boris. US Democratic presidential candidate Joe Biden has warned the UK government that any attempt to undermine the Irish Good Friday Agreement could impact the likelihood of a US-UK trade deal.

Biden, who is an Irish-American, said that the Irish peace accord should not become a “casualty of Brexit”. Read more.

“I’m sorry that the government decided to go against our decisions, rather than consider us a model to follow”, said Cirio. “The decision to measure the temperature before entering schools is aimed at guaranteeing the safety of our citizens, introducing another level of control to ensure the health of our children, personnel and elderly is protected”, he added.

Spelling error sends gigantic face masks at schools. The order of face masks to protect pupils from COVID-19 made by the Greek ministry of health made a “spelling error” on the size and as a result, hundreds of thousands of gigantic “full-face” masks were delivered at Greek schools. See pictures here and read more details here.

In other news, the extremely rare phenomenon Medicane (short for Mediterranean hurricane), which in this case has been named ‘Ianos’, hit the islands of Kefalonia, Ithaca and Zakynthos on Thursday (17 September) as it approached the Ionian sea. Today, Western Greece, Peloponnese and the capital city of Athens are expected to be hit. Read more.

Cyprus blocks EU’s Belarus sanctions plan. Plans by the European Union to slap sanctions on Belarus have fallen into disarray, sources say, a hostage to internal politicking that one EU official described as a threat to the bloc’s credibility. Read more.

Worrying statistics. The Czech Republic passed the 2,000-mark for daily COVID-19 cases for the first time after recording 2,139 new infections on Wednesday. Though most patients are experiencing no or only mild symptoms, the rise in new infections has seen an increase in  people needing to be hospitalised, which rose by one-third compared to last week.

In other news, older pupils at elementary schools and students at secondary schools will be required to wear face masks, even during lessons. And bars and clubs across the country will have to close at midnight as is already the case in Prague. (Ondřej Plevák | EURACTIV.cz)

Personal COVID-19 data leaked. Slovak IT company Nethemba has announced that it had flagged a critical vulnerability in the app providing information to the public on the pandemic situation. This resulted in unrestricted access to personal data of some 130,000 patients who had been tested for the virus.

Among the data were unique identifiers, dates of birth, contact information and test results. The problem was reported to the government’s cybersecurity agency on 13 September and has since been fixed. (Zuzana Gabrižová | EURACTIV.sk)

Diaspora votes. The USR-PLUS Alliance (RE) asked the government and President Klaus Iohannis to increase diplomatic efforts to ensure proper planning of voting in countries with a large number of Romanian citizens. Romania will hold general elections in early December, and more than 4 million of its citizens live outside its borders.

However, just a few thousand have registered to vote by mail so far, and many of those living abroad could find themselves unable to vote because polling stations would be impossible to set up due to the pandemic situation. (Bogdan Neagu | EURACTIV.ro)