Lithuania says Belarus could be ‘uncontrolled hotspot’ of COVID-19 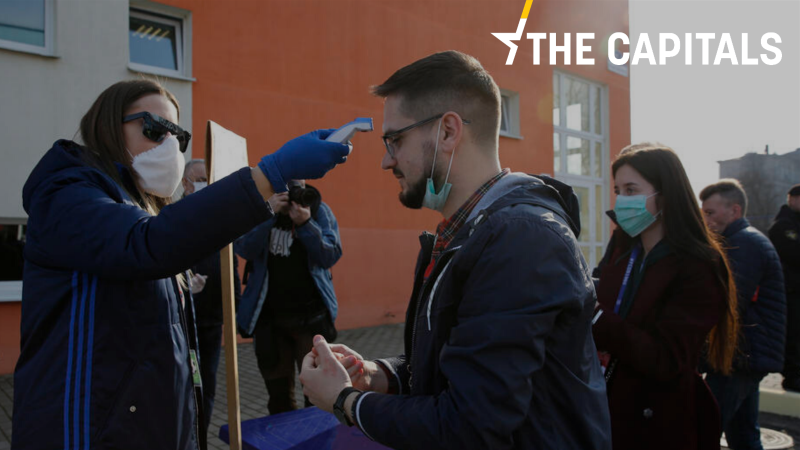 Fans are checked, if they have high body temperature, at the entrance to a stadium prior the Belarusian Premier League soccer match between FC Minsk and FC Dinamo-Minsk in Minsk, Belarus, 28 March 2020. Belarus didn't suspend soccer games, as most of European countries did because of coronavirus COVID19 pandemic. Belarus plans to hold all soccer matches, as scheduled, local media reports. [EPA/ TATYANA ZENKOVICH]

Before you start reading today’s edition of the Capitals, feel free to have a look at Alexandra Brzozowski’s article “NATO tasks top commander to speed up medical aid in response to COVID-19 pandemic“

***To stay up-to-date on everything to do with the coronavirus across the capitals, feel free to check out EURACTIV’s comprehensive overview, which is regularly updated with the help of our network of offices and media partners.***

VILNIUS. The Lithuanian president, foreign minister, and prime minister, have criticised Belarus’ handling of the COVID-19 pandemic as the country reported 254 cases of coronavirus and four deaths.  Lithuania’s President, Gitanas Nausėda, said the situation in the neighbouring country may be worse than the official data suggests.

Although Foreign Minister Linas Linkevičius said the country was happy about the “humanitarian corridor” via Minsk offered to Lithuanians coming back home, the situation in the country was a cause for “concern”.

Prime Minister Saulius Skvernelis also said on Wednesday (1 April) that the neighbouring country could be “an uncontrolled hotspot” of the disease. Fearing the spread of the virus, Skvernelis said the country will prohibit people from crossing the border if there is no “adequate” response to the coronavirus crisis on the Belarusian side.

Belarusian President Alexander Lukashenko responded by telling the Lithuanian president to “take care of your own virus,” while the country’s foreign ministry called on Lithuania not to spread “speculations and rumours”. (Benas Gerdžiūnas | lrt.lt)

Altmaier echoes recession warnings. In line with the country’s economic experts, Germany’s Economy Minister Peter Altmaier of the Christian Democratic Union (CDU) had warned of an impending recession. Telling a press conference on Thursday (2 April) that “we must expect deep cuts in economic growth” and had predicted losses as high as 8% per month this spring with a peak in April or May, Altmaier was still optimistic that the economy would recover in the second half of the year. (Sarah Lawton | EURACTIV.de)

French MEP on the ‘front line’. As France’s COVID-19 death toll increased to 4,884 on Thursday night (2 April) after the government published the number of people who have died in elderly care centres, French MEP and surgeon, Chrysoula Zacharopoulou (Renew), announced that she had joined the Begin Hospital in Saint-Mandé, a military hospital near Paris.  In an interview with EURACTIV France, she spoke of an emerging wave of solidarity and Africa, which cannot be left behind in this global health crisis. Read the full interview here. (EURACTIV.FR)

Mask update and future lockdown phase-out. Prime Minister Sophie Wilmès (MR) and several of her ministers appeared before the Belgian parliament on Thursday for the first tim after Belgium’s National Security Council (CNS) had to extend the coronavirus containment measures by two weeks until 19 April. Alexandra Brzozowski has the details.

‘Light at the end of the tunnel’ as third package reaches parliament. In Friday’s session, Austrian MPs are expected to pass the third round of legislation aimed at curbing the coronavirus’ spread. If approved by parliament, tenants who cannot pay rent until 30 June will be protected from eviction and contract cancellation but will have until 31 December to pay the rent. Besides, while low-income families will also receive support from a €30 million fund, there will be a guarantee of accident insurance when working from home, as well as a three-month-moratorium on loans for consumers and small enterprises.

In a press conference on Thursday (2 April), health minister Rudolf Anschober (Greens) said he saw “light at the end of the tunnel” after Austria recorded five days of a single-digit increase rate of diagnosed infections.

To stay up-to-date with how Austria is dealing with the pandemic, click here.

New fighter planes in a new light. Finland is about to decide the successor to its current Hornet fighter plane fleet in 2021 but an expected recession and budget cuts in many sectors are casting doubt over the purchase. EURACTIV’s Pekka Vänttinen has the story.

COVID testing pledge under fire. The government’s promised to conduct 100,000 coronavirus tests a day in England by the end of April, has come under fire over the lack of clarity and detail about how it will be reached. Benjamin Fox reports from London.

All students will pass. No student in Italy will flunk this year thanks to a decree that will be voted on Sunday (6 April). A draft of the law seen by daily La Repubblica shows that even students with an insufficient grade average (5 or below which corresponds to C or below) will successfully complete their class. For students attending the last year of high school, there will be no written final test but a single oral exam. And if health reasons so require, the final examination could also be carried out in telematic mode. (Gerardo Fortuna | EURACTIV.com)

COVID-19 hammers Spanish job market as the country surpasses 10,000 deaths. With more than 800,000 jobs lost in March, Spain’s labour market has suffered its worst month on the record due to the coronavirus, the government said on Thursday (2 April).

The job loss figures were published as Spain marked another grim milestone in the human cost of the outbreak, registering a record 950 deaths overnight, pushing the country above the 10,000-mark in terms of overall fatalities, although the rate of new infections has started to slow down. EURACTIV’s partner Efe reports.

To stay in the loop of everything related to the coronavirus in Spain, click here.

Easter lockdown. All passenger flights will be banned at all Portuguese airports during Easter (9-13 April), while state, cargo and humanitarian flights will still be operating. And during the four days of Easter, nobody will be allowed to enter their local town, unless for work purposes.

While Portugal has registered 9,034 confirmed cases of COVID-19 and 209 deaths as of Thursday (2 April), Portuguese President Marcelo Rebelo de Sousa had admitted on Thursday that the country could reach 20,000 to 30,000 infections by 17 April, once the current state of emergency comes to an end.

Also, check out the coverage on Portugal’s approach to COVID-19 provided for you by EURACTIV’s Network. (Lusa.pt)

MEPs warn about impact of coronavirus crisis on migrants. The EU and its member states must help Greece manage its borders, MEPs on the European Parliament’s Civil Liberties committee said on Thursday during a video conference, warning about the risk of Covid-19 spreading in refugee camps. Athens-Macedonian News Agency has more.

Coalition agreement signed. Four government parties (Ordinary people, We are family, Freedom and Solidarity, For the people) signed a coalition agreement on Thursday (2 April), which governs the relationship and procedures among coalition parties. All the parties’ MPs bar one ended signed the agreement.

The agreement stipulates, among other things, that coalition MPs will not table their own legislative or non-legislative proposals that would go outside the content of the yet-to-be-presented government programme without before receiving the green light from the leaders of all coalition parties. The only exception is the issue of abortion, that may be tabled without prior scrutiny. (Zuzana Gabrižová | EURACTIV.sk)

CJEU judgement is ‘not important’. The Court of Justice of the European Union (CJEU) ruled on Thursday (2 April) that the Czech Republic, Poland and Hungary breached EU law during the migration crisis when refusing to participate in the relocation system for refugees.

According to Czech Prime Minister Andrej Babiš, however, this does not matter. “We have lost the case, but it is not important. What’s important is that we do not have to pay for anything. The Commission claims just some reimbursement of court fees,” he said. “We will not accept any migrants and the quotas have expired in the meantime. Mainly thanks to us,” he added. (Lukáš Hendrych | EURACTIV.cz)

Diplomatic trolling. Hungary has joined a statement, in which thirteen European governments said they are ‘deeply concerned’ about the risk of violations of the rule of law, democracy and fundamental rights. The statement, without explicitly mentioning Hungary by name, was a stab at the county’s recent emergency measures giving the government extensive powers, including the right to rule by decree. “It felt so empty without us … So we joined the statement. European values are common to us all,” said justice minister Judit Varga. In response, Hungarian socialist MEP Klára Dobrev (S&D) tweeted “Masters of troll-diplomacy”.

Florist shops, nurseries to reopen. From Friday (3 April), gardens, nurseries and florists can re-open in Slovenia, in addition to grocery stores, gas stations and pharmacies. Another exception from today is that construction work can resume on uninhabited construction sites, provided that there is no contact with other people.

At the same time, police will step up controls from Friday to Sunday and check compliance with the ban on public gathering and travel, focusing particularly on popular tourist hot-spots in the country. (Zoran Radosavljevic | EURACTIV.com)

Finally, unanimity. The government has adopted the second round of economic measures designed to ease the burden that the private sector is experiencing amid the coronavirus pandemic. Croatian PM Andrej Plenković announced that his cabinet has decided to postpone the procurement of combat jets for the time being.

“At this moment, this is the only logical and correct decision,” he said, adding that Croatia will notify all the other countries which are participating in the tender process about its decision. EURACTIV Croatia’s Tea Trubić Macan digs deeper.

COVID-19 vs fight against corruption. Ministers, MPs, magistrates and all other high-level officials can now delay declaring their assets, under one of the amendments of the Stage of COVID-19 emergency law proposed by the ruling party GERB. While High-level officials would have been required to declare their assets before 15 May, they will now be able to declare within one month after the state of emergency has come to an end. The state of emergency will most likely be extended until 13 May. (Krassen Nikolov | EURACTIV.bg)

Read more about the COVID-19 situation in Bulgaria, here.

Foreign Minister Dacic says China helped Serbia the most. China has so far helped Serbia the most in its battle against the coronavirus pandemic and Russia is preparing to deliver aid, said Serbian Foreign Minister Ivica Dacic on Thursday (2 April). “This is a fact at this time and no one should be angry about us saying so. At this moment China is in a position to be able to help us,” Dacic said in an appearance on Pink TV. EURACTIV Serbia has more.