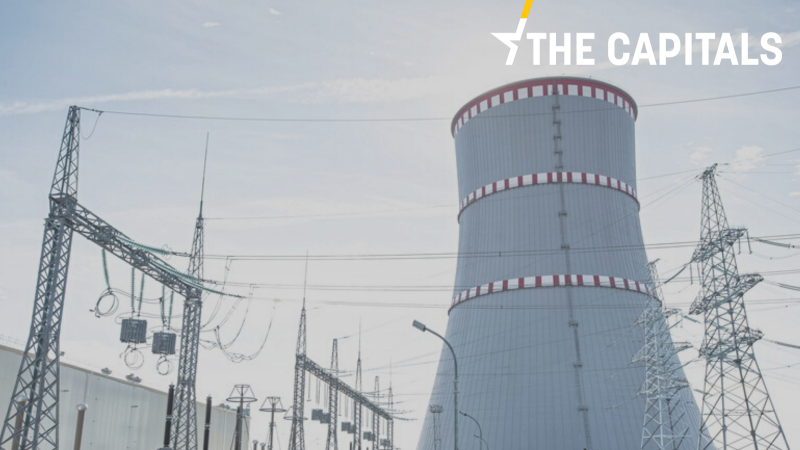 Before you start reading today’s edition of the Capitals, feel free to have a look at the leak Only zero-emission cars will win EU green investment label, written by Kira Taylor.

***A message from The Pew Charitable Trusts
Every year, $22 billion is sunk into subsidies that encourage overfishing. Right now, the WTO has an opportunity to end this harmful practice and help communities that rely on a healthy ocean.

Read on: Why the cost of inaction is too high.

Lithuania has asked Belarus for clarification after its new nuclear plant located some 50 kilometres from the country’s capital suffered an incident just five days after launch.

Belarus President Alexander Lukashenko took part in the opening of the plant on 6 November, where he said the launch of the Astravyets NPP was as “ordinary” as building a metro. Read more.

COVID-19 figures in Germany positive but no ‘turnaround’ yet. Germany’s latest coronavirus figures are encouraging since the spread of the disease has “significantly reduced” in the past few days, Health Minister Jens Spahn said on Wednesday. However, there has not yet been a “turnaround”, he added. Read more.

“For the first time, we are seeing a leveling off of the numbers in intensive care. If deaths continue to increase, the pace slows down,” he said, adding that the drop in cases concerned all age categories. (Alexandra Brzozowski, EURACTIV.com)

Crucial Brexit talks ahead, Coveney says. Irish Foreign Minister Simon Coveney has said that any breakthrough on the ongoing Brexit negotiations between the EU and the UK is unlikely this week, but could come next week when EU leaders hold a summit. Read more.

Nordic Council to focus on green and digital. As Finland is set to take over the Nordic Council presidency in 2021 ahead of the group’s 50th anniversary, the country will prioritise issues related to the environment and digitisation, Finnish Equality and Nordic Cooperation Minister Thomas Blomqvist (Swedish People’s Party) said. Read more.

Combined with the EU’s €1.1 trillion long-term budget for 2021-2027, the Recovery Fund, which Portuguese Prime Minister António Costa described as “a bazooka”, has yet to be formalised in a compromise expected to be reached shortly by the Council and the European Parliament. (André Campos, Lusa.pt)

US report fuels the fire in Aegean Sea. Despite growing pressure from both Washington and Brussels for a dialogue between Greece and Turkey, the situation doesn’t seem to improve. Turkey has decided to send again research vessel Oruc Reis accompanied by Turkish warships to the Eastern Mediterranean until 23 November. Read more.

Riots during Independence March in Warsaw. The right-wing and nationalist Independence March, which authorities had banned due to the coronavirus pandemic, ended up in participants clashing with police in several areas across the capital, wounding several police officers and one press photographer. Read more.

The politician angered Beijing by visiting Taiwan in September, despite China’s warnings not to do so. A disinformation network has been spreading the lie that he was promised $4 million from the Taiwanese cabinet for the visit. (Ondřej Plevák | EURACTIV.cz)

Fidesz’s new electoral bill toughens rules for opposition. The ruling Fidesz party submitted a legislative proposal on Tuesday at 11:59 pm as the country headed into a new partial lockdown on Wednesday that critics say would significantly worsen the chances of the opposition parties during the 2022 parliamentary elections. Read more.

State of emergency to stay in Slovakia. The Slovak government has prolonged the state of emergency for another 45 days, but will not stop people from leaving their homes at night. Slovakia’s COVID-19 measures are a source of mounting tension in the governing coalition. (Zuzana Gabrižová | EURACTIV.sk)

Bulgarian government fears lockdown could lead to more protests. Bulgarian authorities will not impose a lockdown like some other EU member states because they are afraid of people’s reactions. Read more.

They have 37 votes, need 60, but hope that they could achieve a majority: NSi and SMC, members of the governing coalition as well as SNS were supportive in ushering preference vote. They overtake the government coalition that was also planning to submit a very similar proposal. (Željko Trkanjec | EURACTIV.hr)

Serbian embassy in Montenegro has decided to postpone a wreath-laying ceremony at the memorial plaque erected in honour of the “Serbian liberators of Budva” in WW1, because Montenegro’s foreign ministry had failed to issue an approval. Read more.

Bosnia has ‘formidable weaponry’. The leader of the Democratic Action Party, Bakir Izetbegović, told reporters he was impressed with what he saw after he was given a demonstration of some of the manufactured products.

Izetbegović added that any progress made by the military industry in the country is a “step towards fortifying peace.” “This is a message of discouragement to anyone who may have any bad intentions towards BiH”. he added., concluding there was “formidable weaponry in the hands of BiH”. (Željko Trkanjec | EURACTIV.hr)

Vote to set up new government delayed.  Parliament Speaker Aleksa Bečić decided to delay the session during which the new government will be voted. The vote will take place on 2 December, rather than 23 November. One of the reasons is that Nikola Terzić, a candidate for the interior minister position, decided not to accept the nomination. (Željko Trkanjec | EURACTIV.hr)

Rama publicly thanked Turkish President Erdogan for the initiative, in what is another sign of strengthening relations between Rama and Erdogan. On Turkey’s national day, the Turkish Flag was projected on the front of the Tirana University building. (Željko Trkanjec | EURACTIV.hr)