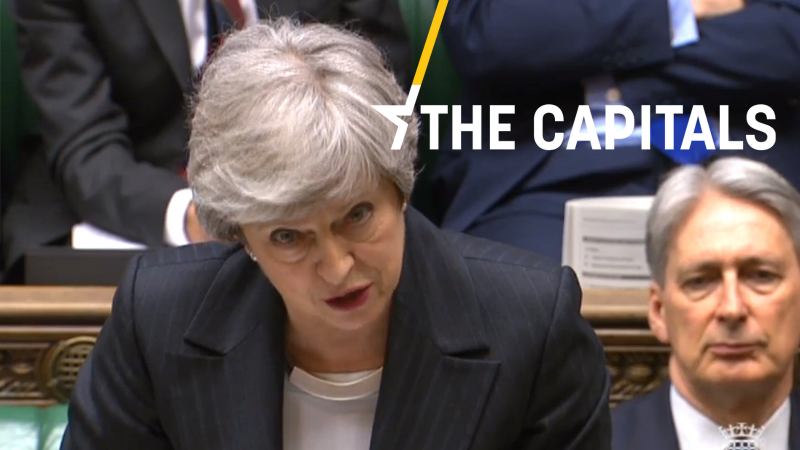 The Capitals is EURACTIV's daily newsletter from across Europe. [EPA/UK PARLIAMENTARY RECORDING UNIT]

The UK government was plunged into disarray last night, following the resignation of the leader of the house of commons, along with rising calls for Prime Minister May to resign. The news comes as UK citizens head to the ballot boxes to take part in the European Parliamentary elections.

Staunch Brexiteer Andrea Leadsom tendered her resignation to May on Wednesday evening, saying that she doesn’t believe that the PM’s approach would “deliver on the referendum result.”

“I know there are important elections tomorrow, and many Conservatives have worked hard to support our excellent candidates,” Leadsom added. “I considered carefully the timing of this decision, but I cannot fulfil my duty as Leader of the House tomorrow, to announce a bill with new elements that I fundamentally oppose.”

Meanwhile, the head of the Parliamentary Conservative Party, the 1922 Committee’s Graham Brady, has announced that he will sit down with the Prime Minister on Friday as she faces mounting calls on both sides of the Brexit debate to step down with immediate effect.

EURACTIV understands that the Prime Minister could be forced to go by the end of the week, as a coalition of rebel Tory MPs seek a change in the party rules which would allow them to oust May at the earliest possibility.

On the Labour side, the party’s chair, Ian Lavery, weighed in on the debate on Wednesday. “The Prime Minister’s authority is shot and her time is up,” he said. “While the Tories are ripping themselves apart, our country is in crisis. “For the sake of the country, Theresa May needs to go.”

Several senior government sources said on Wednesday that May’s authority as Prime Minister has been substantially compromised and that she has lost the confidence of all sides of the house. The leader of the Parliamentary Eurosceptic European Research Group, Jacob Rees-Mogg, also had some strong words, following Leadsom’s resignation. “This is a bizarre and incompetent way of doing government…the Prime Minister does not have the authority to deal with anything,” he said.

Rees-Mogg added that he thought May’s deal would most likely lose by an even larger margin than before, should it be brought back to the Commons for a vote. This follows the compromises she has most recently made to the plans, which include the possibility of MPs ‘making the case’ for a second referendum.

Moreover, the ERG leader on Wednesday evening reaffirmed his support for the former Foreign Secretary Boris Johnson as the next potential leader of the Conservative Party, and by default, the next UK Prime Minister, when May finally walks.

The UK polling firm YouGov currently puts Boris Johnson as the favourite for the next Tory leader, followed by the ex-Brexit negotiator, Dominic Raab. UK citizens head to the polls on Thursday, with Nigel Farage’s Brexit Party riding high. Estimates say that the group could win around 30 seats in the European Parliament.

Less far-right talk. The audiovisual authority (CSA) has decided that the interviews of Steve Bannon, Donald Trump’s controversial ex-strategist will be added to far-right National Rally speaking time for the EU elections.

Enlargement. The EU enlargement debate was heated up in France after Nathalie Loiseau, Macron’s leading candidate, showed little enthusiasm about accepting new members in the EU family. She told radio RTL that she blocked the EU accession of Albania and North Macedonia when she was EU affairs minister.

François-Xavier Bellamy, the head of the list for the conservative Les Républicains (LR) party, reminded her that Macron had supported enlargement during his Sorbonne speech. (EURACTIV.fr)

Michel for EU top job? The European Parliament “needs a larger and more balanced coalition which should be built by leaders like Charles Michel, Mark Rutte, Antonio Costa and others,” French President Macron told Belgian daily Le Soir in an interview.

Macron praised Belgian PM Michel for his “courageous and effective” politics in terms of the migration pact approval, adding that he’d be an ideal candidate for a EU top job. (Alexandra Brzozowski, EURACTIV.com)

Government in turmoil. Austrian Chancellor Sebastian Kurz sought on Wednesday (22 May) to contain the fallout from the collapse of his coalition government. He must now win the support of the opposition Social Democrats (SPÖ) or a furious far-right Freedom Party (FPÖ) to survive a no-confidence vote due next Monday.

ManyFPÖ lawmakers are fume at Kurz for ending the coalition following the corruption scandal and the Social Democrats are likely to determine the outcome of Monday’s vote. (Claire Stam, EURACTIV.de)

Illusion to walk alone. In an interview with EURACTIV’s partner EFE, Emma Bonino, Italian former EU Commissioner and Foreign Minister, said the idea of 27 countries each on their own is not only an illusion but also dangerous.

“On one hand, we find Putin, on the other an aggressive China, Trump who does not like to deal with Europe and the Mediterranean on fire. The only possibility Europeans have to make their voices heard somewhere is the EU project.”(EuroEFE.EURACTIV.es)

Government cease-fire. In order to avoid more frictions between the two ruling parties, Italy’s PM Giuseppe Conte has announced the postponement of two flagship decrees: the one backed by right-wing Lega, which provides fines on those who rescue migrants at sea, and Five Star Movement’s tax expenditure plans for families.

“But we cannot go on like this, without harmony”, warned Giancarlo Giorgetti, Salvini’s right-hand. (Gerardo Fortuna, EURACTIV.com)

Timmermans and Weber in Poland. Socialist Frans Timmermans is visiting Warsaw to support the new progressive Wiosna party, which will potentially join S&D and is expected to get 3-4 seats. Conservative Manfred Weber will meet Civic Platform (EPP) leader Grzegorz Schetyna.

Duda vs Tusk. According to the latest presidential polls, incumbent Andrzej Duda gets 41% of the vote, while Donald Tusk 27%. Although the elections are due in 2020, it’s been already a hot topic in light of Tusk’s comeback to domestic politics to unseat Duda, a close ally of the conservative ruling party (Pis). (EURACTIV.pl)

Lacking electoral programs. Three Slovak parties, including the ruling nationalist SNS (formerly EFDD), the far-right ĽSNS, and Salvini s Slovak ally “We Are Family”, did not publish any official electoral program before the EU elections, EURACTIV.sk has found. (EURACTIV.sk)

EU elections kick-off. Voters in the Netherlands, along with the UK, will kick off EU election proceedings today. Latest polls predict PM Mark Rutte’s VVD (ALDE) winning for the first time with 5 MEPs, alongside newcomer Eurosceptic force FvD (ECR), also on 5 seats out of the country’s total 26. The emergence of Thierry Baudet’s party, which swept to victory in regional elections in April, is largely responsible for the collapse of Geert Wilders’ PVV (ENF), now set to get just 1 seat.

Rutte faced off against Baudet in a one-on-one TV debate Wednesday night, with the incumbent PM saying he does not want one of the EU’s top jobs. He also said that it would have been better if Italy and Greece had not joined the euro, but that the single currency protected the Dutch economy from the 2008 crisis. Baudet retorted that without the euro there would not have been a crisis. (Sam Morgan, EURACTIV.com)

Azeri vs Russian gas. Bulgarian PM Boyko Borissov and his Greek counterpart Alexis Tsipras met yesterday to mark the start of construction on the Bulgaria-Greece gas inter-connector (IGB). The pipeline is scheduled to become operational at the end of 2020. Tsipras said IGB would turn the Balkans into an energy hub while Borissov highlighted the need to diversify natural gas deliveries. Sofia is totally dependent on Russian gas.

On the other hand in Sarajevo, Milorad Dodik, chairman of the presidency of BH, said he would do everything so that gas supplies are tied to Russia. Instead of connecting to Croatia’s gas pipeline and LNG on the island of Krk, he backed a new gas pipeline oriented exclusively to Russian suppliers. (EURACTIV’s partner Dnevnik, Theodore Karaoulanis, EURACTIV.gr, Željko Trkanjec, EURACTIV.hr)

Putin wants money back. “The largest investments come to Russia from countries like Cyprus and the Netherlands, this is the repatriation of funds,” Russian President Vladimir Putin told a business congress. Earlier he proposed extending the amnesty for incoming capital for at least one year, subject to conditions. Cyprus’ financial system is the home base of many Russian expatriate funds. (Theodore Karaoulanis, EURACTIV.GR)