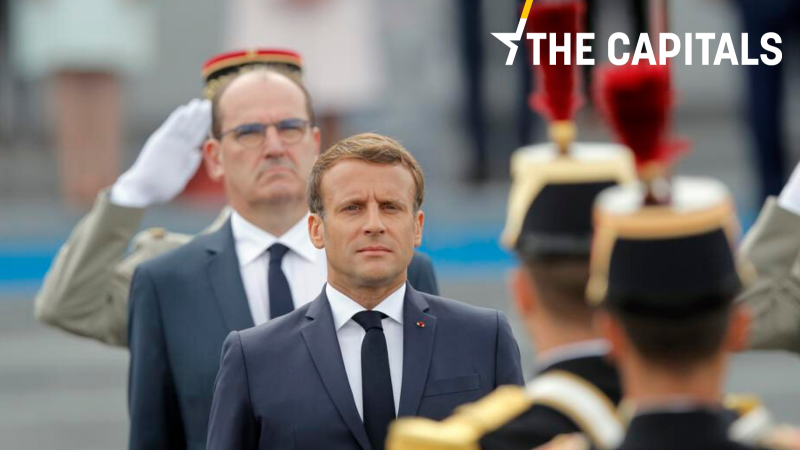 Before you start reading today’s edition of the Capitals, feel free to have a look at the article In Berlin, Sánchez vows to ‘do everything to reach a deal’ at EU summit by EURACTIV Germany’s Philipp Grüll and the piece Recovery money is not a gift, says Italy’s EU ambassador by Gerardo Fortuna.

Make sure you also read up on Philipp Grüll’s interview with Austrian EU Minister Karoline Edtstadler, who said she does not expect an agreement to be reached at the EU’s budget summit this week.

Macron announces national recovery plan of ‘at least €100 billion’. To mark France’s Bastille Day on 14 July, President Emmanuel Macron made several announcements concerning the economy, the pandemic, his new government and the start of the new school year.

In anticipation of “a massive increase in unemployment”, expected to be between 800,000 and one million, the French president announced that the national recovery plan will include a “long-term partial activity scheme” estimated at €30 billion.

“It is better to cut wages than jobs, but there will be no extortion […]. I hope that the employee who agrees to make an effort, on the day when things get better, will be entitled to his share. And the shareholder must also make an effort for his dividends,” said the French president. EURACTIV’s Anne Damiani has the details.

Hahn expects budget agreement this summit. An agreement on the EU budget and the EU Recovery Fund should be concluded during this weekend’s European Council summit, Austrian EU Budget and Administration Commissioner Johannes Hahn told daily newspaper Der Standard in an interview.

While Hahn confirmed that Austria’s rebates will amount to around €237 million, he noted that many of the ministers and heads of government he spoke to had said that “this is not hundred per cent what we expected, but it goes in the right direction.” (Philipp Grüll | EURACTIV.de)

Quarantine travel rules reshuffle. Travellers returning to Belgium from a so-called “orange zone” will be asked to quarantine and get tested for COVID-19, after Belgium’s foreign affairs ministry changed the rules for a third time this week. EURACTIV’s Alexandra Brzozowski has more.

In other news, Belgium’s National Security Council meets this Wednesday morning to examine the changes announced for the month of August, mainly on event sizes.

Luxembourg seeks EU approval for aviation bailout. The government plans to financially support the aviation sector before the end of the year to rescue national airline Luxair, freight carrier Cargolux and the country’s airport operator. Due to the pandemic, around 30% of Luxair staff are still on short-time working contracts, meaning the government pays 80% of their wages.

Since state aid for the aviation industry is heavily regulated, Transport Minister François Bausch wants to present a rescue package for the European Commission to approve by the end of October. “The government is ready to take full responsibility,” Bausch said.

Huawei banned from UK 5G network. The UK has excluded Huawei from its future 5G network infrastructure, the government announced on Tuesday (14 July). The Chinese telecommunications firm immediately urged Boris Johnson’s administration to reconsider the decision, seen as a substantial setback for its business in Europe. Read the full story here.

Anti-coronavirus measures extended until end of July. Italy’s government will extend its anti-coronavirus decree until the end of July, Health Minister Roberto Speranza announced on Tuesday, adding that “the fight against the virus is not finished, we have to be cautious.” This means that facemasks and quarantine for people from outside the EU will now be mandatory. EURACTIV Italy’s Alessandro Follis looks into the details.

Calls for inquiry over claims Catalan lawmaker’s phone was targeted. Current and former leaders of Catalonia’s pro-independence government have called for an inquiry after it emerged that the speaker of the region’s parliament has been warned that his mobile was targeted using spyware its makers say is only sold to governments to track criminals and terrorists. Read more here.

Secret meeting in Berlin. Upon the initiative of the German EU presidency, representatives of Greece, Turkey and the German government met in Berlin on Monday (13 July) in an effort to take the first step and de-escalate tensions between Ankara and Athens. EURACTIV’s Sarantis Michalopoulos has the story.

German defence minister pours cold water on US troop plan speculations. A potential transfer of US troops from Germany to Poland must be discussed first by the whole of NATO, German defence minister Annegret Kramp-Karrenbauer clarified on Tuesday (14 July), ahead of her Kramp-Karrenbauer her expected visit to Warsaw later on Wednesday. Read more here.

Parliament: No rule of law conditionality. The Hungarian parliament, in which Prime Minister Viktor Orbán’s ruling Fidesz party has a super-majority, called on the government on Tuesday (14 July) to prevent linking of EU funding to rule of law, which the legislative body called “political and ideological conditionality.” EURACTIV’s Vlagyiszlav Makszimov digs deeper.

At the same time, according to Portuguese broadcaster RTP, Prime Minister António Costa said after meeting with Hungarian Prime Minister Viktor Orbán in Budapest on Tuesday (14 July), that issues connected to the “liberty and the rule of law” should not be dealt with in the EU’s budget negotiations,

Czech-Polish dispute on EU’s agenda. MEPs from the European Parliament’s petition committee called on the European Commission on Tuesday to launch proceedings against Poland over the planned extension of mining activities in the Turów coal mine, located near the Czech border.

Although the coal mine negatively affects the lives and local drinking water sources of the people living in the Czech Liberec region, Poland’s decision to extend the mining for an additional six years was not discussed with Czech authorities. Therefore, local people are asking the EU for help and the petition was already signed by more than 13,000 people. (Aneta Zachová | EURACTIV.cz)

Education minister defends master’s thesis. The master’s thesis on the fight against terrorism and organised crime of Education Minister Branislav Gröhling (Freedom and Solidarity, ECR) – who has a degree in law – is, according to reports, a “compilation with elements of plagiarism”. Gröhling has, among other things, copied his bachelor’s thesis into his master’s thesis without acknowledging it, something his university allowed at the time.

However, Slovakia’s current education minister is not planning to resign and is denying any wrongdoing. “I am not attached to this chair. Despite this, I will aspire for the trust of the academic community because I want to move forward with reforms,” Gröhling told a press briefing where he reacted to the allegations. (Zuzana Gabrižová | EURACTIV.sk)

Education ministry self-isolates. All the officials at the science and education ministry, including Education Minister Blaženka Divjak, were told by epidemiologists on Tuesday that they had to self-isolate and take COVID-19 tests after a ministry state secretary had tested positive for the virus, Croatian news agency Hina reported. While speedy COVID-19 tests had proved to be negative, the officials would have to remain in self-isolation until 22 July as a precautionary measure, Divjak posted on her Facebook profile.

Prime Minister Andrej Plenković will also be tested for the virus because he had met with Divjak yesterday, a  government spokesman confirmed on Tuesday.

In other news, the prime minister held a phone call with Ukraine’s President Volodymyr Zelensky on Tuesday. The two discussed economic cooperation and Plenković expressed support for Ukraine’s European and reform path while conveying his condolences for the latest Ukraine victims in Donbas. The PM emphasised that Croatia continues to support peace processes within the ‘Normandy format’ for Ukraine, expressing full support for Ukraine’s territorial integrity, a press release said. (Karla Juničić, EURACTIV.hr)

Parliament rejects temporary universal income. The national parliament rejected a proposal by the LMŠ party of ex-PM Marjan Šarec to pay out €100 a month to all Slovenian citizens in the last quarter of the year to counter the negative impact of the coronavirus crisis.

Fifty-two MPs rejected the proposal, saying it would “generously distribute sweets to everyone, both poor and rich”, while 26 were in favour.

In other news, public debate on proposed changes to media legislation has been extended until the end of August, after an outcry from the public and the media, and from abroad. The national union of journalists said on Tuesday the changes were “targeted against the plurality and democratic nature of the media landscape” and would give the authorities more influence over the media. (Zoran Radosavljević | EURACTIV.com)

The US supports the protest in Bulgaria. The US Embassy in Sofia announced late on Monday that it supports peaceful demonstrations as a basic democratic right of Bulgarian citizens and as a sign of a vibrant civil society in the country. “Every nation deserves a judicial system that is non-partisan and accountable to the rule of law. We support the Bulgarian people as you peacefully advocate for increased faith in your democratic system and promote the rule of law in Bulgaria. No one is above the law”, the embassy said in a statement. Chief Prosecutor Ivan Geshev, who is the main target of the protesters, made no comment on the US statement.

Tuesday marked the sixth day of protests in Bulgaria with thousands of people gathered in the streets, insisting that the government and the general prosecutor resign.

First Parliament chamber says convicts have no place in public offices. Deputies adopted a citizen initiative that aims to ban people convicted in court from holding public offices, clearing the first hurdle for the proposed constitutional change. The initiative called ”No convicts in public office”, initiated by the Save Romania Union (RE) a few years ago, aims to include in the Constitution a provision that citizens sentenced to prison for crimes committed with intent may no longer be elected to the local public administration bodies, in the national parliament, or as the head fo state.

The initiative must now pass the Senate and then a referendum will be held for the Constitutional change. (Bodgdan Neagu, EURACTIV.ro)

Seven NGOs warn of democratic crisis in Serbia. Seven civil society organisations in Serbia called on the EU on Tuesday to stay true to its founding values and rules and demand concrete results in the implementation of the rule of law and fundamental democratic principles in Serbia. EURACTIV Serbia has the full story.