Macron on the hunt for progressive allies 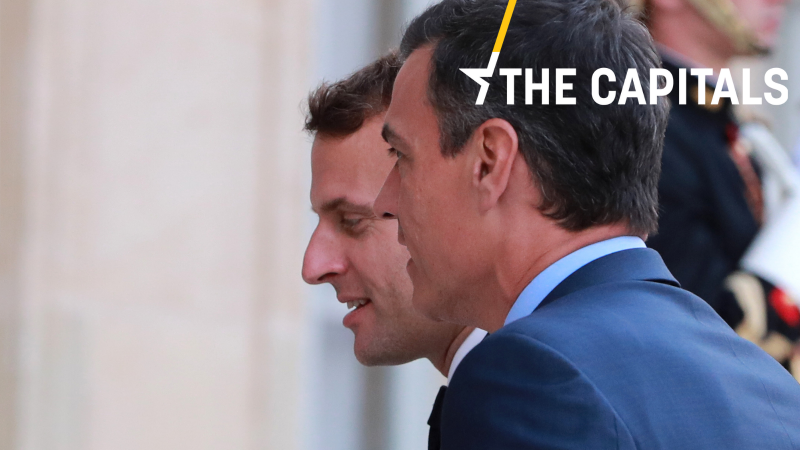 The Capitals is EURACTIV's daily newsletter from across Europe. [EPA/CHRISTOPHE PETIT TESSON]

Before reading The Capitals today take a look at #EUelections2019: Winners and Losers

Macron seeking allies. An informal summit today (28 May) will bring together the EU leaders in Brussels to start the consultations about the new leaders of the EU institutions. But Emmanuel Macron has already made his contacts with other EU leaders to build a “progressive” majority in the EU. Immediately after the results, he met with German Chancellor Angela Merkel and on Monday he received Spain’s Socialist leader and acting PM Pedro Sánchez. Sánchez, whose socialist party got 20 of the 54 MEPs in the next EU House, said he wanted to build a “social democratic alternative” against the policies of “cuts, precariousness and lack of opportunities”. Today, Macron will have lunch with Belgian PM Charles Michel and other EU leaders close to him before the summit in Brussels.

In her first comment after the EU elections, Chancellor Angela Merkel said she wanted a quick agreement on the next EU Commission president. “We want to find a solution as quickly as possible because the European Parliament will meet at the beginning of July and it would, of course, be desirable if there were already a proposal at that point,” she said.

Meanwhile, a high-ranking EPP source told EURACTIV Croatia that the conservatives will insist on Weber as the next EU Commission boss but everything will depend on the composition of the future coalition in the EU House.

“We do not see ourselves in a pro-migrant coalition with the left. A coalition of the centre, that will stabilise and protect Europe, is needed,” the source said.

Dutch PM Mark Rutte will join other members of the newly dubbed ALDE+Renaissance+USR group on Tuesday afternoon for a pre-summit before the informal evening dinner, where the main topic of discussion will be the allocation of top EU jobs.

EURACTIV Czech Republic reports that Czech PM Andrej Babiš is expected to refuse the Spitzenkandidaten process at the summit. He criticised this system before and there is no hint that he has changed his mind. There are also doubts about the future Czech Commissioner because he hasn’t confirmed support for incumbent Commissioner Věra Jourová yet.

Corbyn under pressure: Labour leader Jeremy Corbyn is under pressure from fellow party MPs to clarify his stance on Brexit, following a disastrous night at the European elections for his group. Labour came in at third place with less than 15% of the vote, securing only 10 MEPs.

Shadow Foreign secretary Emly Thornburry hit out at Corbyn for his lack of decisiveness in adopting a Brexit stance. “We should have said quite simply that any deal that comes out of this government should be put to a confirmatory referendum and that Remain should be on the ballot paper and that Labour would campaign to Remain,” she said.

EURACTIV understands that Corbyn could be under further pressure from Labour frontbenchers in the coming weeks, including deputy leader Tom Watson and Shadow Brexit Secretary Keir Starmer, who both support a confirmatory vote. Rumours suggest that if Corbyn doesn’t clarify his position swiftly, he could face a leadership challenge.

For his part, Corbyn is rallying for a general election. “The priority I think at the moment is for this government to call for a general election so we can decide the future. I think that is a demand that should be made as strongly as possible,” he said on Monday. (Samuel Stolton, EURACTIV.com)

SPD deep down. Germany’s Social Democrats have called for a crisis meeting for next week to discuss their strategy following the disastrous election results. The party’s left-wingers warned that it was time to ditch a coalition with Angela Merkel’s conservatives. The socialists scored 15.8% – well behind greens in the EU elections but things got worse on Sunday as they were defeated in the northern state of Bremen for the first time in 73 years. (Claire Stam, EURACTIV.de)

Kurz out. Austria’s Chancellor Sebastian Kurz on Monday (27 May) became the first chancellor in the country’s post-war history to be removed from office by a no-confidence vote over a corruption scandal that had already brought down his coalition with the far-right. The motion against Kurz and his cabinet is the latest fallout from the so-called “Ibiza-gate” scandal. More here. (Claire Stam, EURACTIV.de)

Letter from Brussels. The European Commission is considering triggering an excessive deficit procedure against Italy, two EU officials told Reuters. Rome risks a fine of €3.5 billion for having breached EU rules on debt and structural deficit in 2018, according to Bloomberg.

“I’m waiting to read the letter from the EU but I believe that the European Commission must take note that yesterday (26 May) people voted for change and growth,” said vice-premier Matteo Salvini. (Gerardo Fortuna, EURACTIV.com)

Pro-EU coalition in turmoil. Poland’s newly established pro-EU alliance ‘European Coalition’ has started the blame-game after its defeat in the EU elections by ruling conservative PiS party. Despite winning 3 seats, conservative Polish People’s Party (PSL/EPP) is not sure whether to continue with the Coalition, while other progressive parties also have similar thoughts. Grzegorz Schetyna, leader of the EC, has not made it clear what is next for the movement.  (EURACTIV.pl)

Unfair mathematics? Slovakia is supposed to have an additional MEP (14 instead of 13) as a result of Brexit. As it happens the mathematical formula that is being used to reallocate seats, has come under scrutiny.

The Christian democrats (KDH, EPP) will temporarily “lose” one of their two elected MEPs despite gaining more votes than SaS (ECR) which was also attributed two seats based on the election results. While the party deems the situation unfair, the MEP concerned, Miriam Lexmann, says: “I can’t say that I am impatiently waiting for the Brexit to happen because it see a higher purpose in Brexit not happening at all“.  (Zuzana Gabrižová, EURACTIV.sk)

Socialists return to Parliament: After defeat in the EU elections, the opposition Bulgarian Socialist Party (BSP) MPs are expected to return to the National Assembly. Last February the socialist MPs left parliament, at the initiative of their leader Kornelia Ninova. The move was criticised, including by the former leader of BSP and current leader of the Party of European Socialists (PES) Sergei Stanishev. (Georgi Gotev, EURACTIV.com)

DIEM25 thriller. There is no final result yet on the EU elections, meaning that 1 seat is still pending: At 89% counted votes, DiEM25 of former finance minister Yanis Varoufakis gains now one seat in the next EU House, with 3,01% of the vote. 3% is the minimum threshold.

Snap elections in July. PM Alexis Tsipras has called snap elections on 7 July instead of 30 June. The main reason is that most of the schools are used as voting centres and are occupied until 2 July for the yearly exams. The delay might give Syriza government the chance to decide on the next judiciary leadership, as well as the next Greek EU Commissioner. The main opposition New Democracy party (EPP), which is anticipated to win the election, has reacted strongly to such a scenario. (Theodore Karaoulanis, EURACTIV.gr)

New Era: For the first time in the history of Cyprus, a Turkish Cypriot has been elected to the European Parliament. Niyazi Kızılyürek takes one of the two seats of the of left-wing AKEL (EL) party. (Theodore Karaoulanis,EURACTIV.gr)