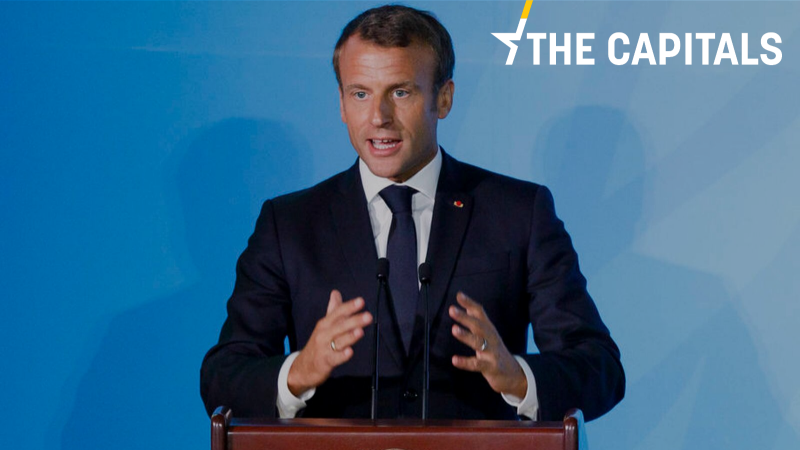 Macron also said Poland had blocked his efforts to make the EU commit to carbon neutrality in 2050. [EPA/JUSTIN LANE]

Before you start reading The Capitals today, take a look at the UN summit day #3: SDGs in the spotlight

Climate clash. Following his first climate clash with US President Donald Trump in 2017 with his famous promise to “make the planet great again”, French President Emmanuel Macron has now targeted Poland in a non-diplomatic way ahead of UN climate summit in New York.

“Marching every Friday to say that the planet is burning, that’s nice, but that is not the problem,” Macron told reporters, adding that people should “go protest in Poland! Help me move those I cannot push forward.”

Macron also said Poland had blocked his efforts to make the EU commit to carbon neutrality by 2050, along with the Czech Republic, Hungary and Estonia).

Polish Deputy Foreign Minister Szymon Szynkowski vel Sek said on Monday (23 September) that Macron was aware that Poland was trying hard to reduce carbon emissions. But Macron insisted: “I’m not stigmatising anyone. But I want to convince our Polish friends that it’s good for them to move on this,” he told a news conference.

Macron’s comments also prompted some reactions at home, where far-left Jean-Luc Melenchon tweeted that “the king of disdain has spoken”. Besides, climate expert Gael Giraud reminded that France was not especially a champion in fighting global warming, even if the French president likes to present himself as a champion on the international stage when it comes to environmental issues.

Speaking at the UN General Assembly, Croatian President Kolinda Grabar-Kitarović said: “Croatian coastal areas, one of the world’s cleanest and most wondrous, are severely affected by poorly managed waste from our southern, neighbouring countries.” Without citing Montenegro and Albania, she called on neighbours to stop throwing waste into our oceans and seas.

Meanwhile, in Prague, climate activist Greta Thunberg’s speech at the UN Climate Summit triggered strong reactions. Despite the fact that Greta is a 16-year-old girl, she became the main point of criticism from high-level politicians in recent days, especially from the main opposition party, the Civic Democrats, which is part of the European Conservatives and Reformists (ECR) group in the European Parliament. MEP Veronika Vrecionová (ECR) said it is a “dirty trick to misuse a young girl for political ambitions.” MP Jan Skopeček said that politicians who take Greta’s apocalyptic visions seriously are “dangerous madmen”.

However, PM Andrej Babiš remained neutral, saying that “it was interesting, of course. I was a bit surprised by her tone of voice.” But he also said that people should not be scared by some apocalyptic visions.

In Rome, Education Minister Lorenzo Fioramonti (Five Star Movement) released a non-binding memo to school administrations, which appears to justify the absence of schoolchildren who intend to attend global climate strike on Friday (27 September). Although deans across the country will have the final say, some parents have already criticised the memo, saying it encourages children to skip school.

The socialist leader said he did not fear the predicted large increase for the conservatives of Partido Popular (PP), the liberal-centrists of Ciudadanos (Citizens), and far-right party Vox, who could, ultimately, form a “right-wing” coalition to govern together.

Spain will hold fresh elections on 10 November since Sánchez failed to get the support of leftist party Unidas Podemos (United We Can). The acting PM also failed to obtain abstentions from PP and Ciudadanos.

UK Prime Minister Boris Johnson’s proroguing of parliament is ‘unlawful, void and of no effect,’ the country’s Supreme Court ruled on Tuesday (24 September), in a decision that commentators said will have “huge constitutional consequences” for the future of the government.
Announcing the unanimous decision, the Court’s president, Lady Hale, said that “the effect [of prorogation] on the fundamentals of our democracy was extreme.” (Samuel Stolton, EURACTIV.com)

Greece will honour the Prespa deal. Greek PM Kyriakos Mitsotakis met with his North Macedonian counterpart Zoran Zaev in New York and vowed that Athens would honour the name-change deal. According to the Athens-Macedonian News Agency, EURACTIV’s partner in Greece, Mitsotakis told Zaev that he would not have signed the Prespes Agreement himself but that he is now obliged to honour it. He also urged North Macedonia to avoid delays in meeting the obligations of the agreement, especially those related to trademark protection.

Mitsotakis, contrary to the official line of his center-right EU political family (EPP), fiercely opposed the Prespa deal when it was in opposition. The current leftist Syriza opposition, which signed the Prespa deal, accused Mitsotakis of hypocrisy and of playing dangerous political games at the expense of the country’s national interests. Read more

Defence deal with the US. Polish President Andrzej Duda has signed an agreement with his US counterpart Donald Trump to deepen defence cooperation. Particularly, it was agreed that there would be six new sites on Polish territory, where American troops and equipment will be located. Trump also said Poland was moving closer to fulfilling the requirements of the visa waiver program, which means that it may be possible for Poles to travel visa-free to the US by the end of the year.

In addition, Germany has promised to step up its military involvement. During a visit in Washington, Defence Minister Annegret Kramp-Karrenbauer met her US counterpart Mark Esper in an attempt to improve the currently strained relations between both countries. She emphasised the need to increase military cooperation with the US and also announced her support for a marine mission in the Strait of Hormuz. However, Germany would only participate in a European mission, she added. The remarks followed a joint statement of Germany, France and the UK holding Iran responsible for the attacks on two Saudi oil facilities and therefore, backing the US conclusions on what happened.

Moreover, Kramp-Karrenbauer reaffirmed Germany’s commitment to NATO’s defence spending targets, which amount to 2% of the country’s GDP, but in the long run. “For 2024, my goal is 1.5%,” she said. “It’s not just about cash. It’s also about international commitments,” she added. (Łukasz Gadzała, EURACTIV.pl/ EURACTIV.de)

Lack of trust. The lack of trust in or dissatisfaction with politics was the most common reason why Bulgarians did not vote in the last EU elections, according to a Eurobarometer survey. (Dnevnik.bg)

Kovesi to become EU Chief Prosecutor. The European Parliament and Council negotiators agreed to appoint Laura Codruţa Kovesi as the first head of the new EU Public Prosecutor’s Office on Tuesday (24 September). The European Parliament selected Kovesi as its candidate, and the MEPs’ team supported the Romanian national throughout the negotiations despite Council’s opposition earlier this year. The agreement needs to be formally approved by both the Parliament and the Council. The European Public Prosecutor’s Office, which will be investigating, prosecuting and bringing to justice EU budget fraud and corruption cases. So far, there are 22 participating EU countries. (EURACTIV.ro)

Croatian President: Territory swap between Belgrade and Priština would open Pandora’s box. In a meeting with UN Secretary-General Antonio Guterres, which focused on the situation in Bosnia and Herzegovina and Belgrade-Pristina relations, Croatian President Kolinda Grabar-Kitarovic said that an exchange of territories between Belgrade and Pristina would be a bad idea which would open a Pandora’s box in the region of former Yugoslavia and lead to various demands for territorial swaps. According to a release published on Grabar-Kitarovic’s website, discussions also centred around the situation in Southeastern Europe and Croatia’s taking over of the Council presidency during the first half of 2020.

The “correction of borders” has been an attempt to solve the Kosovo issue. The US and EU High Representative for Foreign Affairs and Security Policy, Federica Mogherini, supported the idea. (beta.rs,EURACTIV.rs/ Željko Trkanjec,EURACTIV.hr)