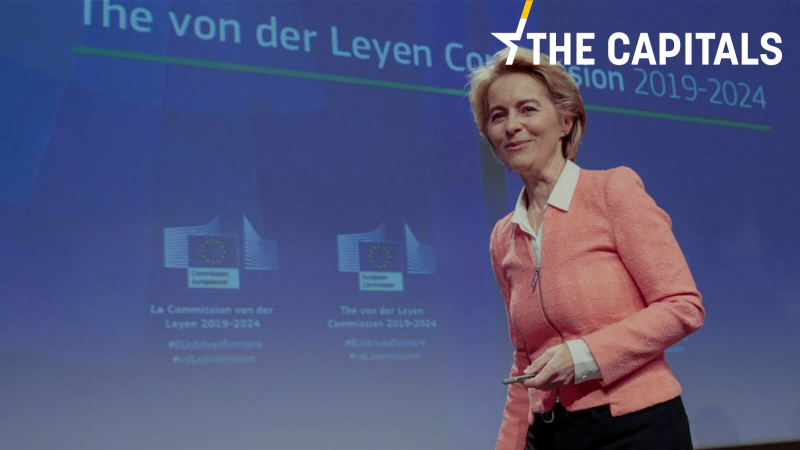 The Capitals brings you the latest news from across Europe. [EPA/OLIVIER HOSLET]

The European Parliament will decide this week how it intends to organise the confirmation hearings of the 26 Commissioners-designate. One of the highlights of EU democracy, it is also a precondition for the assembly to hold a vote of approval on the new European Commission.

Renew Europe, the centrist political group led by French President Emmanuel Macron’s En Marche party, has a clear view about how the hearings should be carried out.

“It is out of the question that hearings of Commission vice-presidents take place before the Conference of Presidents,” said Pascal Canfin, the chairman of the Parliament’s powerful environment committee.

“For us, this is an absolute red line,” Canfin stressed, saying Renew is firmly opposed to such a set-up, which he said shields candidates from tough questions posed by MEPs, ensuring they sail smoothly through the Parliament’s usually rough confirmation hearings.

There are no clear rules about how the hearings of Commission vice-presidents should take place. The first (and last) time this happened, in 2014, Commission VPs were questioned by the Conference of Presidents, the Parliament’s highest authority, which brings together the leaders of the assembly’s political groups.

But for Canfin and Renew, such double standards would be unacceptable. Besides, it would be unconceivable that such powerful officials are removed from committee scrutiny.

“We believe there is currently no majority to do this,” Canfin told journalists on Friday (13 September). However, he said other political groups – the centre-right EPP, the Conservative ECR and the far-right – could be tempted to shield some VPs from tough questioning.

The decision, Canfin suggested, hinges on the Socialist S&D group, which could be lured to side with the conservatives in order to protect their main candidate, Frans Timmermans, who was nominated as Commission vice-president in charge of the European Green Deal.

An S&D source told EURACTIV it would be an “own goal” if the socialists attempted to avoid public hearings in the parliamentary committees.

Timmermans does not have much to fear from MEPs, however. Of the eight vice-presidents designated by Ursula von der Leyen to lead the next European Commission, he is not among the most controversial.

Greece’s Margaritis Schinas, who was appointed to a controversial portfolio entitled “Protecting our European way of life”, is though. The job’s bizarre title raised eyebrows across Europe when Ursula von der Leyen unveiled her team last week.

The move was widely interpreted as a gesture to the far-right and anti-immigration parties, and drew widespread rebuke, mainly from the left and Greens but also from Macron’s En Marche.

Last Friday, Vangelis Meimarakis, the chief MEP of Greece’s ruling New Democracy party (EPP), said the title was “not fair” for Schinas estimated that von der Leyen would ultimately change it “Because the criticism is for the title, while Mr Schinas has been welcomed by all”. (Frédéric Simon, EURACTIV.com)

Toward a stronger Europe. France is quite happy about the new Commission, as Paris’s strategy to ‘make Europe great again’ with a lot of French officials in top EU jobs has yielded results. But the idea of a stronger Europe is not only Macron’s dream anymore, as it is also gaining ground in Germany and across European borders. Member states still need to prove their willingness though, through the European budget. Read more here

Automobile, nein, danke! Between 15,000 and 25,000 demonstrators, according to police and organisers, called on Saturday (14 September) for a “transport revolution” in an unprecedented protest against the International Motor Show exhibition currently going on in Frankfurt, a sign that even in Germany the industry is no longer a sacred cow. (Claire Stam, .de)

Iglesias last Friday said he would ask the king to act as “mediator” and help Sánchez understand that a coalition is the best way to provide the country with stability. However, the king’s role does not necessary lend itself to the “mediation” task.

Sánchez won the 28 April elections, but with no clear majority. He and his socialist party still reject forming a coalition government with Unidas Podemos, and offer instead a programmatic agreement, something the leftist party has refused several times.

The deadline to reach an agreement looms. King Felipe will hold today and tomorrow consultations with all political parties. By this Wednesday there should be clarity on whether or not a candidate for the investiture has enough backing before new elections are called. (EuroEFE.EURACTIV.es)

Electoral programme. The ruling right-wing Law and Justice party (PiS/ECR) unveiled its electoral programme before the upcoming parliamentary elections due in October. The programme is called “Polish model of welfare state” and has some controversial points. They include the possibility of arresting an MP upon request of the attorney general (in Poland it is the minister of justice), and regulation of the profession of journalist.

From one Matteo to another. Former PM Matteo Renzi is considering quitting the centre-left Democratic Party (PD) to set up a new centrist force under his leadership. Such a move could weaken the centre-left PD and undermine the current ruling coalition with the Five Star Movement. Party leader Nicola Zingaretti opposed the split, trying to convince Renzi to change his mind.

Meanwhile, Matteo Salvini re-launched himself as leader of right-wing Lega, vowing to return to power soon. At the annual party rally, Lega supporters seemed to have forgiven Salvini for his doomed summer gambit, a power-grab that ultimately ousted him from the government. (Gerardo Fortuna, EURACTIV.com)

Migration headaches. Increased numbers of refugees arriving on islands in the Aegean Sea have prompted Greece to seeks solutions both internally and from the EU side. Greek PM Kyriakos Mitsotakis announced last week a change in asylum evaluation procedures, in an effort to shorten the time needed for putting refugees on return-to-Turkey lists. But the EU-Turkey agreement still faces serious problems. Foreign minister Nikos Dendias visits Berlin today for talks with his German counterpart, Heiko Maas.

A German government spokesperson said last week that Berlin was very carefully monitoring the situation on the Greek islands and said the recent 8% increase in arrivals “must be taken seriously into consideration”.

Migration policy minister Giorgos Koumoutsakos said Greece has raised the matter with the Finnish EU Presidency and it will be discussed at a working group on Tuesday in Brussels. (Theodore Karaoulanis,EURACTIV.gr)

Slovak opposition aims to end fragmentation. Slovak opposition parties, while quite fragmented, are trying to cooperate and limit mutual attacks to increase their chances of replacing the socialist Smer-SD (PES) government in 2020. Smer-SD is facing massive corruption scandals and is linked to a person charged with the murder of journalist Jan Kuciak as well as poor results on various important fronts, such as healthcare and education. Still, the opposition is faced with key challenges, as one of the (many) opposition leaders, Igor Matovič (OĽaNO/ EPP), ruled out the possibility of being part of any coalition government that would consider registered partnerships or a different approach to migration policy as part of its agenda. (Zuzana Gabrižová,EURACTIV.sk)

EU presidency budget blues. Foreign Minister Tomas Petricek is not satisfied with the draft budget of the Czech EU Presidency, as he believes that Prague will not be able to fulfill some of its ambitions. The draft proposes an increase of Brussels personnel to 156, but countries of similar size had a staff of around 250 during their presidencies. PM Andrej Babiš is the one who calls for the lowest budget possible. The Czech Republic will take over the EU Presidency in the second half of 2022. (Ondřej Plevák,EURACTIV.cz)

Pressure on critical journalists. Two scandals involving journalists mark tensions surrounding the election of the new prosecutor general. Silvia Velikova, a well-known reporter for National Radio, was asked to stop work and instead go to the city of Stara Zagora to provide training to young journalists. The reason, as explained by various sources, is that Velikova is critical of the way Ivan Geshev is pushed forward as the sole candidate to replace outgoing prosecutor-general Sotir Tsatsarov. Similarly, photojournalist Vesselin Borishev, who works for the ClubZ magazine, was arrested, because he took photos of policemen ahead of a protest against Geshev’s elections. He was later released.  (Georgi Gotev, EURACTIV.com)

Conservatives prepare to fight the government. The centre-right National Liberal Party (PNL, EPP) said it stands ready to govern and it is preparing a motion of non-confidence against the Romanian government. PNL leader Ludovic Orban said the party is holding talks this week with all opposition parties. The PSD (S&D) is trying to hold onto its minority government, after junior partner ALDE left the coalition last month, but the socialists are trying to lure members from other parties, including ALDE, to build a majority. (EURACTIV.ro)

‘I will stay in politics’. Presidential candidate Miroslav Škoro, a pop singer, said on a weekend Croatian state television show that he plans to stay in politics even if he loses the presidential elections (he is placing third in the polls). EURACTIV partner Jutarnji.hr reported on Sunday that Škoro is gathering political parties on the right-wing spectrum. ‘Most’ (right wing close to Catholic church) on Friday supported Škoro as a presidential candidate.

In the EU elections, right-wing parties in total scored about 15% of the votes but those votes were divided between several parties. Part of these votes was previously going to the ruling HDZ (EPP). If Škoro gathered those parties he could create a strong parliamentary group and strengthen ongoing clashes between factions in HDZ: there are two streams against party president and PM Andrej Plenković. The first test will be the presidential elections at the end of this year. (Željko Trkanjec, EURACTIV.hr)

Debate on law on registration of partnerships. Serbian PM Ana Brnabić has said the drafting of the Law on Registration of Partnership and Gender Identity had begun and that there were ongoing talks with NGOs. Brnabić made this statement at the Belgrade Pride Parade, which she attended with her partner who recently had a baby. (beta.rs,EURACTIV.rs)