Macron’s Renaissance makes its pitch for the EU centre ground 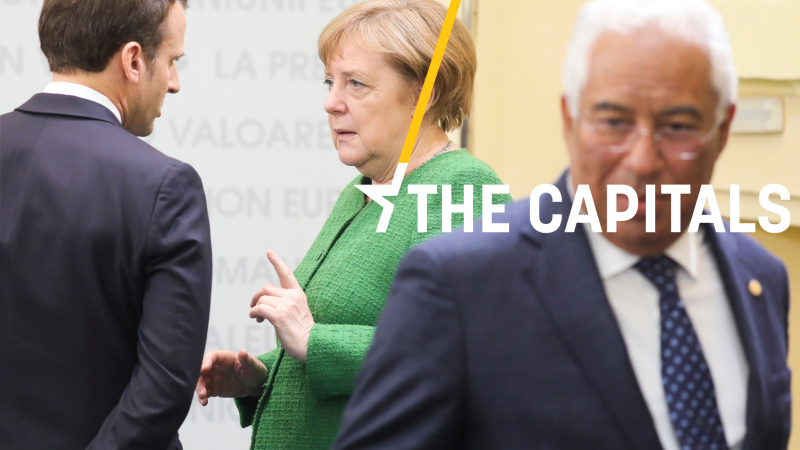 The Capitals is EURACTIV's daily newsletter from across Europe. [EPA/LUDOVIC MARIN]

Emmanuel Macron’s Renaissance platform, which aims to create a centrist alliance of more than 100 lawmakers, set out its stall at a rally on Saturday in Strasbourg.

Reuters reported that Macron could play a kingmaker role in the next European Parliament considering that neither the centre-right European People’s Party (EPP) nor the EU socialists will be able to form a majority. Macron has said he respects EPP’s candidate Manfred Weber but “does not feel bound at all by the principle of Spitzenkandidaten”

MEP and EPP vice-president Françoise Grossetête said she would vote for Macron’s list than her own centre-right Les Republicains party. Former right-wing PM Jean-Pierre Raffarin also made a passionate speech in Strasbourg on the EU.

Guy Verhofstadt, who had to stay in a Paris hospital for a health issue, sent a video message, as well as centre-left Matteo Renzi whose Democratic Party is considering joining the Renaissance group in the next EU Parliament.

Antonio Costa, the Portuguese socialist PM, also voiced his support, arguing that the EU needed its progressive parties to work together.

“Those who say that we will be isolated and that will have no clout in the parliament will discover we have at least 100 lawmakers on whom they will have to rely,” Nathalie Loiseau, who leads the Renaiisance list, told RTL-LCI.

According to her, the group should be “a centrist group in the European Parliament that makes a difference, without which no majority is possible”.

Dimitris Papadimoulis, EU Parliament vice-president and leftist Syriza MEP, told EURACTIV.com on 10 May that Weber had no chance to get the EU Commission high post.

“I think even Berlin proposed Weber as a ‘single-use’ candidate and not because he thinks he has a real chance of being Juncker’s successor. The EU left, the socialists and the Greens have already said a clear no to Mr Weber. A new majority, which can pick another president, is being shaped,” Papadimoulis said.

Farage slams BBC: In a heated interview on the BBC’s Andrew Marr show, Brexit Party leader Nigel Farage slammed the broadcaster for not asking the types of questions he wanted to answer.

“I’ve been going around the country speaking at packed rallies every night and do you know who is not there? The BBC,” Farage said on Sunday. “And with this line of questioning I can see why. You are just not interested are you?”

Farage refused to address Marr’s questions on a range of controversial issues, including gun regulation, global warming, and the privatisation of the NHS. (Samuel Stolton, EURACTIV.com)

AKK has no plans to push Merkel out. Annegret Kramp-Karrenbauer, leader of the governing Christian Democrats (CDU) has said she has no ambition to succeed Angela Merkel as chancellor before 2021. “The chancellor and the government are elected for a full term and citizens are right to expect that they take this mandate seriously,” she told German dailyDie Weltin an interview.

Commenting on speculations that Merkel might leave earlier than planned, she said: “When it comes to me, I can rule out that I am scheming for a change.”

More Catalans reject independence. A poll conducted by the regional Opinion Studies Center has found that 48.6% (44.1% in March) of respondents in Catalonia are against the separatist movement and the idea of secession from Spain, El Pais reported.

EU ‘referendum’. Lega leader Matteo Salvini has called the upcoming EU elections a referendum on his party’s policies. “On 26 May there are no EU elections, but a referendum between life and death, past and future, a free Europe and an Islamic State based on insecurity and fear,” he said.

Far-right environmentalist movement. Giuseppe Civati, the leader of the leftist party Possibile which planned to run in the EU elections together with the Italian Greens, has suspend the campaign after a report in the daily Il Fogliofound found that two Green candidates were also backed by the far-right environmentalist movement Green Front. “Constitutional values and anti-fascism come first for me,” said Civati. (Gerardo Fortuna, EURACTIV.com)

‘Man of the Year’. On the occasion of the 30th anniversary of the foundation of “Gazeta Wyborcza” daily, President of the EU Council Donald Tusk received its ‘Man of the Year’ award.

“I would like all those who find a common ground, e.g. with the US President as the Polish government does, to convince even the most demanding partners, that they do not treat the EU as a problem, as something negative […] It is in the interest of Poland and entire Europe to maintain transatlantic ties at any price”, Tusk said.

According to a TVN channel survey, in the first round of presidential elections, 41% of respondents would vote for current President Andrzej Duda, and 28% for Tusk.

Le Pen visits Bratislava. The leader of the French National Rally will meet her new Slovak partners in the ENF, Sme rodina – Boris Kollár’s party, which is expected to elect one or two MEPs in the EU elections.

“We want to uphold the EU. Marine Le Pen wanted to exit from the EU in the past. She is not saying that anymore… As we put it, she embraced common sense”, Peter Pčolinský, Sme rodina lead candidate, told EURACTIV.sk in an interview. (Zuzana Gabrižová, EURACTIV.sk)

The Czech police also found over 450 persons wanted in other EU countries. The use of the warrant and other forms of police and judiciary cooperation has been growing since Czechs entered the EU in 2004. (Ondřej Plevák, EURACTIV.cz)

Orban avoids debate with Timmermans. According to socialist MEP István Ujhelyi, Hungarian Prime Minister Viktor Orban has refused a Euronews invitation for a TV debate with socialist Spitzenkandidat Frans Timmermans ahead of the latter’s visit to Budapest on 18 May.

“It would not be right to interfere in the election campaign of Mr Weber and Mr Timmermans,” Orban said. Last week, Orban said he would not back Weber as president of the EU Commission despite coming from the EPP.

“Orban’s cowardice is well-documented. Since 2006, he has been refusing to participate in any open debate as he prefers to use his propaganda machine to get political messages across,” Ujhelyi said.

Mitsotakis hits out at Tsipras. Main opposition New Democracy leader Kyriakos Mitsotakis has said Greek Prime Minister Alexis Tsipras and his Hungarian counterpart Viktor Orban “don’t want Weber as the next EU Commission President but both of them are not saying whom they really want”. He also called Tsipras to resign and call snap national elections if his party comes second in the EU elections. (Theodore Karaoulanis, EURACTIV.gr)

Defending the citizenship-by-investment program. The Bulgarian association of employers wants the government to keep a program that grants citizenship to foreign investors. There were calls to revise the scheme after the chairman of the national agency for Bulgarians living abroad was charged with creating an organised crime group and taking bribes in a lucrative scheme that may have allowed thousands of people to fraudulently acquire passports from Bulgaria. (EURACTIV’s partner Dnevnik).

Tensions with Turkey. Bulgarian Foreign Minister Ekaterina Zaharieva is summoning on Monday (13 May) the ambassador of Turkey Hasan Ulusoy following the latter’s statement on 11 May that Ankara wants the Bulgarian authorities to encourage the teaching of the Turkish language in Bulgarian schools.

Ulusoy made the statement in front of Bulgarian PM Boyko Borissov on the occasion of the opening of a plant by a Turkish investor in the Bulgarian city of Kardjali, an area with compact Turkish ethnic population. Zaharieva called Ulusoy’s statement “disturbing” adding that Turkish can be studied in Bulgaria like any other language. Ulusoy later explained that Turkish investors needed workers who could not only speak but also write in Turkish. (Georgi Gotev, EURACTIV.com)

Fresh ELA spat. Romania could not have applied to host the European Labour Authority because, as the holder of EU Council presidency, it needs to be impartial, labour minister Marius Budai wrote on Facebook. Centre-right MEP Siegfried Muresan, who has repeatedly asked the government to file a bid to host the new EU agency, said the minister was “either unaware of the EU rules or he is deliberately lying to hide his incompetence.”
“No EU rule denies Romania’s right to file a bid, it just cannot use the EU Council presidency to influence the decision in its favour,” Muresan said. “It’s like saying the World Cup organiser cannot take part in the competition it hosts,” he added.
///

BiH on US agenda after Serbia-Kosovo spat. High representative of the international community in BiH Valentin Inzko has said the USA will be more engaged in the Western Balkans region. The problems facing BiH will be tackled after the Serbia-Kosovo crisis is resolved, he added. (Željko Trkanjec, EURACTIV.hr)