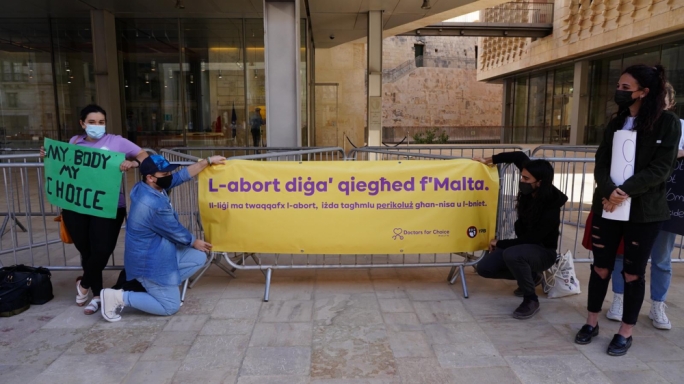 Activists in Valletta back the bill [Malta Today]

A bill proposing the decriminalisation of abortion in Malta was tabled Wednesday (12 May) in parliament, a first for the Mediterranean nation.

Malta is the only European Union country with a total ban on abortion.

Anyone who seeks or helps with an abortion can be sentenced to up to four years in prison.

One prohibits the ‘procuring of a miscarriage’ and carries a prison term of up to three years, another makes anyone assisting the abortion liable for wilful homicide or wilful bodily harm, and another holds any medical professional who administers “the means whereby the miscarriage is procured” liable to imprisonment of four years.

The bill suggests these articles are replaced by one stipulating a 10-year imprisonment for whoever carries out a forced abortion.

“We all know that safeguarding women’s rights does not come through the threat of putting them in prison,” Farrugia told reporters outside parliament after presenting the legislation.

Her surprise announcement triggered a ripple of muttering from stunned MPs inside parliament, but a handful of pro-choice campaigners gathered outside, holding up banners saying, “Trust Women” and “Abortion is already in Malta”.

Prosecutions for abortions are extremely rare in Malta, but a recent UK study found that around 400 Maltese women travel abroad to have an abortion every year, while another 200 or so purchase abortion pills online.

Both of Malta’s major political parties are openly anti-abortion, so the bill is expected to face a rocky ride — and may never be enacted.

Opposition leader Bernard Grech told journalists he was in favour of “caring for sexual health, especially of women”, but that his conservative Nationalist Party would be discussing the matter privately before taking an official position.

The government’s Environment Minister Aaron Farrugia — the first Labour Party MP to react — said they are ready to discuss the matter.

The bill will have to face a lengthy parliamentary process before going to a vote on whether it should become law.

The government sets the agenda of the House and so has the power to stop the issue from being debated altogether.