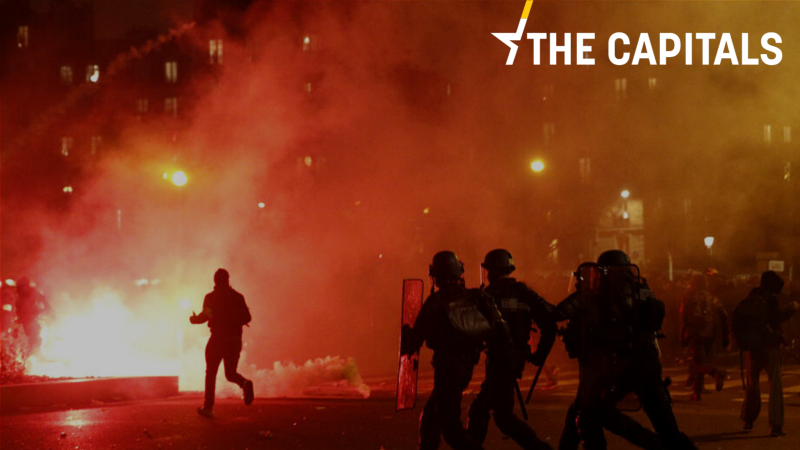 Before you start reading today’s edition of the Capitals, we invite you to find out more about Libra, potentially the next big cryptocurrency, in an exclusive story by Jorge Valero, who also reports on a breakthrough in defining the taxonomy for green finance. Also, feel free to read an article by Frédéric Simon about nuclear being squeezed out of EU green finance scheme.

Major strike brings out thousands in France. Emmanuel Macron is facing a key episode in his five-year term as he faces the largest wave of industrial action in his presidency that has already severely disrupted schools and transport.

The strike that started on Thursday (5 December) brought out around 800,000 people from a wide range of professions, against Macron’s plans to overhaul the retirement system, introducing a single points-based system that would increase the retirement age for millions.

44% of employees were on strike at EDF, 80% at RATP, 55% at SNCF, and half the teachers and professors did not teach at the National Education Department. Some of the aircraft also had to remain grounded due to a lack of air traffic controllers.

“It will last as long as it takes, there will be a winner and a loser,” said the CGT representative of the railway workers at Gare de Lyon for the SNCF, at LCI.

After making concessions worth billions of euros last year to calm the ‘Yellow Vests’ protests, French President Emmanuel Macron will be facing a major challenge to his authority, and the government can’t simply withdraw its plan without weakening its political base, ahead of municipal elections next spring.

Read more on this story (EURACTIV.FR)

Drastic cuts to reach climate targets: An internal report authored by the Federal Environment Agency (UBA) proposes drastic cuts for Germany to reach its climate targets in transport, the sector with the worst climate impact in the country. While the paper was originally drafted in June, when the German government was preparing its climate package, its results were not available to the public until the Süddeutsche Zeitung first published them early yesterday morning (5 December).

The report proposes increasing the tax on diesel by 70 cents to €1.19 by 2030 and the price of petrol by 47 cents. It also calls for ending privileges for company cars as well as scrapping an allowance for people who commute by car. However, perhaps the most controversial is the suggested implementation of a 120 km per hour speed limit on the Autobahn. The report describes the targets as “ambitious but achievable.”

The government’s climate package calls for cutting emissions from transport by 62 million tonnes of CO2 per year. Current plans highlight promoting electric vehicles and alternative fuels, subsidising rail travel, and increasing prices on carbon emissions. However, UBA claims that these measures will not nearly be enough.

Meanwhile, the Social Democrat (SPD) party conference begins today (6 December), amid speculation about the beginning of the end for the Germany’s Grand Coalition between the Christian Democratic Union (CDU), the Christian Social Union (CSU) and the SPD. Despite their initial calls to exit the governing coalition, the designated party chairs, Saskia Esken and Norbert Walter-Borjans, are now seeking to avoid a clear vote. Walter-Borjans told the SPD newspaper, Vorwärts (Forward), “we don’t want to go head over heels out of the grand coalition.” This hesitance has disappointed the party’s left-wing, which could lead to a showdown over the weekend and potentially new elections. (Sarah Lawton | EURACTIV.de)

Catalan pact will be “within the Constitution”, promises Sánchez. The political agreement between Spain’s socialist party (PSOE) and Catalan separatists of Republican Left of Catalonia (ERC) will respect the country’s Constitution, acting socialist PM Pedro Sánchez has promised.

Sánchez also committed to revealing details of the future agreement with ERC, which could unlock Spain’s political stalemate after the elections of 10 November.

Any PSOE-ERC deal “will be within the law and public” and “under the umbrella of the Constitution”, Sánchez said in London, where he attended the NATO summit. Meanwhile, on Thursday, PSOE’s Secretary of Organization, José Luis Ábalos, said that negotiators from ERC and the socialist party will meet on 10 December to continue the dialogue.

The ERC’s vote in favour – or abstention – is essential to allow the appointment of Sánchez and the formation of a “progressive” government coalition between the PSOE and leftist Unidas Podemos (United We Can). (EuroEFE.EURACTIV.es)

Speaking again. Socialist coalition seeker Paul Magnette (PS) has spoken again with Conservative parties CD&V and CDH and might possibly issue an invitation for Flemish nationalist N-VA before he goes to the King on Monday to report about the state of play in the federal government formation. All three had not been part of talks in the last weeks as he mainly worked on a purple-green coalition with Socialists, Liberals and Greens. According to sources, the liberals of Open VLD think it is too early to form a purple-green government and suggested to try a purple-yellow option with N-VA first. (Alexandra Brzozowski | EURACTIV.com)

Supercomputer. Italian State-controlled defence and aerospace giant Leonardo presented one of the most powerful supercomputers in the world at its 2019 Innovation Award day this week. It will soon be installed in Genoa at the first of the laboratories in the Leonardo Labs network. EURACTIV’s media partner ANSA reported.

PiS suffers court blow. The Supreme Court (SN) ruled that the Disciplinary Chamber of the Supreme Court which was established as part of the PiS government’s judicial reforms, cannot be treated as a court according to EU law, and does not ensure unbiased and independent process.

The ruling is a serious blow to judicial reforms enacted by PiS since 2015 and opens the possibility for Polish judges to ignore domestic bills which are not compatible with EU law.  (Łukasz Gadzała | EURACTIV.pl)

Fico charged. National Criminal Agency (NAKA) has charged ex-Prime Minister Robert Fico (Smer-SD) with defamation and the incitement of hatred after Fico defended a former far-right MP in a video posted on Facebook in September (as reported by the Capitals). The far-right lawmaker in question was convicted by the Highest Court of racist, anti-Roma comments. “Milan Mazurek only said what nearly the whole nation thinks,” Fico said. “If you punish someone for telling the truth, you make him a national hero.” If found guilty, Fico could spend between one and five years in prison.

Abortions and vaccination. The parliament has rejected a restrictive law on abortion but at the same time failed to approve a law requiring a child to be vaccinated to be admitted to kindergarten. (Zuzana Gabrižová | EURACTIV.sk)

The expelled diplomat has the same rank as a Russian diplomat in Sofia who was expelled at the end of October 2019 after the Bulgarian prosecutor’s office announced that a senior official at the Russian Embassy was working as a spy.

Earlier, the prosecutor’s office named the chairman of the Rusofili Association in Sofia, Nikolai Malinov, as a Russian spy and launched a criminal case against him. After the Bulgarian court released Malinov, he traveled to Russia, where was presented with a medal from President Vladimir Putin. (Krassen Nikolov | EURACTIV.bg)

Hungary worried: Romania to establish Day of the Peace Treaty of Trianon? Hungarian lawmakers have expressed concern after a bill was presented to the Romanian Parliament which suggests the establishment of The Day of the Peace Treaty of Trianon. Hungary views that Treaty as one that unduly punishes the country leaving a lot of Hungarians outside the borders, most of them in Romania. Attila Korodi from the Democratic Alliance of Hungarians in Romania (RMDSZ) described the bill as highly offensive to the Hungarian minority in Romania. (Željko Trkanjec | EURACTIV.hr)

Trade war Due to interference with the transfer of Mercator, the biggest Slovenian retail chain, to the Fortenova Group, Slovenian Economy Minister Zdravko Počivalšek has been reported to the European Commission. Agrokor, which bought Mercator in 2014, was later saved by the Croatian government and transformed into the Fortenova Group. The transfer was planned by the end of this year and requires the consent of all Mercator creditor banks, but the process is hampered by the state-owned Slovenian SID Bank, which has not yet given permission.

Počivalšek has made several statements in recent months, emphasising that Mercator’s Slovenian suppliers should retain their status as a major supplier even after Mercator’s transfer to Fortenova. In reaction to the information on the move of Fortenova, he said that he and the Slovenian government have the right to protect the interests of Slovenian suppliers of Mercator in the process of transferring that chain to the Fortenova group. (Željko Trkanjec | EURACTIV.hr)

Croatia’s budget-balancing act  Croatia will need to reconcile different interests regarding the Multiannual Financial Framework (MFF), notably, the differences between the European Parliament and the net contributors to the EU budget, during its European Union presidency next year Prime Minister Andrej Plenković said after meeting Parliament President David Sassoli in Zagreb.

“This is a key match between the conservative position of those that give the most, the middle position of member states that want considerable funds for cohesion policy and agriculture, and the ambition of the European Parliament, which says that if we are to confront the challenges facing Europe today, such as climate change or security, these funds must be higher,” said Plenković.

Sassoli criticised the approach taken by Finland, the current holder of the rotating presidency. He said that the MFF is a political issue of “our vision of Europe” and that the budget talks should also include “a little bit of heart and not just mathematics.” (Željko Trkanjec | EURACTIV.hr)