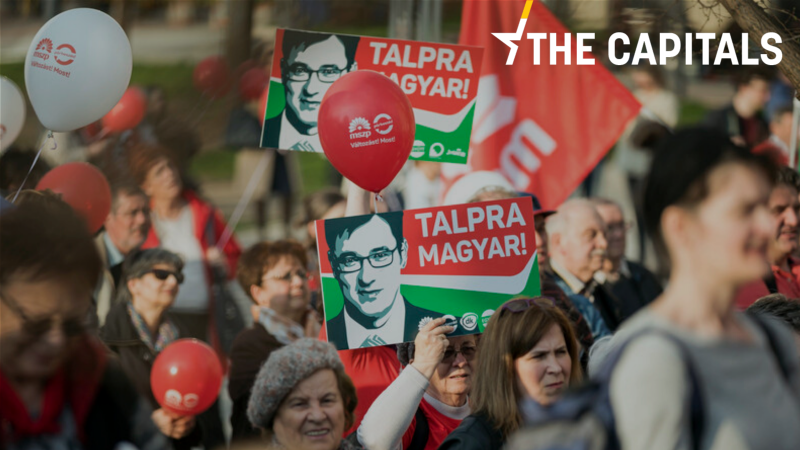 The leaders of Bratislava, Budapest, Prague and Warsaw promised to join forces and tackle challenges posed by their illiberal governments. [EPA/HUNGARY OUT]

Before you start reading today’s edition of the Capitals, we invite you to read the article “Europe waking up to raw materials criticality”, which is part of the Raw materials in the EU economy Special Report.

Also, feel free to have a look at the “Clear standards required for development and use of AI in healthcare” by Natasha Foote as part of the Digital Transformation in Healthcare Special Report.

Opposition mayors from the Visegrad group capitals have met in Budapest in a sign of resistance against the rise of “populists [who] have dominated the political landscape” in their countries.

The leaders of Bratislava, Budapest, Prague and Warsaw promised to join forces and tackle challenges posed by their illiberal governments, as well as climate change and inequality.

The signatories of the “Pact of Free Cities” plan to lobby Brussels for better access to EU funds in an effort to circumvent financial constraints imposed by their governments. “We are interested in the struggle to ensure that at least part of the EU money […] goes directly to local governments, without the intermediation of [central] governments,” Rafał Trzaskowski, the mayor of Warsaw, said at the summit.

The mayors say that grassroots democracy is the answer to the ills in their societies.

Matúš Vallo, an architect and musician, was elected as a mayor of Bratislava after a two-year campaign supported by two newly established opposition parties, while the mayors of Warsaw and Budapest were supported by a broad coalition of opposition parties. The liberal Pirate Party mayor of Prague, Zdeněk Hřib, was elected after his party came second in the municipal elections and formed a coalition with two other opposition forces in the city’s assembly.

In a symbolic gesture, the campus of the Central European University in Budapest, forced out of the country by Orbán, was chosen as the venue of the liberal mayors’ summit. CEU opened its new main campus in Vienna on 14 November but continues to offer some courses in Hungary’s capital.

Today, “the four cities form an alliance against the nationalist populist regimes that suffocate the region’s democracies,” said Gergely Karácsony, Budapest’s mayor. “Cities are the islands that protect these values in our countries” against centralised power.

EURACTIV’s network partners in the region reported that the reactions from media outlets close to the governments have been either aggressive or sought to bury the news. “Trzaskowski wants to face the biggest challenges of our times, but without the government’s help he couldn’t even face a breakdown of the Warsaw sewage plant works”, wrote the pro-government online Polish media Polityce.pl.

“It seems to me that signing of the Pact is just window dressing,” said Patrik Nacher, Czech MP from the ruling ANO party.

The state-funded Hungarian news agency MTI did not report on the summit. In an interview with EURACTIV last month, Budapest mayor slammed the pro-government propaganda carried by Hungarian media saying that his Budapest victory shows that “voters don’t care about what they read in the government’s propaganda outlets”.

Finland’s gas market opens up. Finland will stop being an island in the European gas market in early 2020. The country is the last EU member state to open its markets to European competition. The state-owned company, Gasum will lose its de facto monopoly status as a result of the now finalised pipeline between Paldiski in Estonia and Inkoo in Finland.

The EU-funded (75% – €250 million) 77-kilometre-long Baltic-connector pipeline reflects the EU’s energy strategy to decrease dependence on Russian gas from whom 40% of natural gas in the EU is imported. However, in Finland, the share of natural gas of the total energy palette is mere 8%. A longer-term project already underway aims to unite the Finnish and Baltic gas markets while another pipeline between Lithuania and Poland should be ready within two years. (Pekka Vanttinen, reporting from Finland)

Breakthrough on the German climate package. Yesterday, the German states and the federal government reached agreement on the core elements of the grand coalition’s Climate Package, a set of new laws for environmental protection.

The agreement sets the price of CO₂ at €25 per tonne as of 1 January 2021. The grand coalition partners, the Christian Democrats (CDU), Christian Social Union (CSU), and the Social Democrats (SPD), increased the price from the original proposal of €10 per tonne to accommodate the Greens, who had refused to vote for other parts of the package if the CO₂ remained that low. This price will increase to €30 by 2022 and €55 by 2025.

‘Blackmailing won’t work’. Marta Vilalta, the spokesperson of the Republican Left of Catalonia (ERC), a left-wing Catalan separatist party, on Monday (16 December) warned the socialist PSOE party that it won’t allow to be blackmailed in order to facilitate the formation of a “progressive” government between the Spanish socialists and leftist Podemos.

Mr ‘pension reform’ resigns. As the massive transport strike enters the 12th day, High Commissioner for Pensions, Jean-Paul Delevoye, has resigned over revelations of undeclared income. EURACTIV France reported that for protesters, the pill is hard to swallow. The author of the reform intending to cut pensions should not be too worried about his own pension, but his resignation is a new blow to the government’s planned reforms.

Data murder case appeal. There is an “enormous amount at stake” in an appeal against a High Court decision that found that the police capture of mobile phone metadata in relation to a murder case breached EU law, Ireland’s Supreme Court has heard.

Graham Dwyer was convicted in 2015 for the murder of Elaine O’Hara, after mobile phone evidence retrieved from O’Hara’s handset was obtained by the Irish authorities. Dwyer’s legal team have since claimed that the prosecution’s use of the data was invalid because the legislation allowing for the capture of this data had been annulled by the European Court of Justice.

Grande Baromètre. With a stalemate in the federal government formation that has lasted 205 days, 51% of Flemish people think that new elections should come immediately, while the French speaking Brussels-Region and Walloons are less optimistic about voting again (29% each), a poll conducted by Le Soir-RTL-TVI-Ipsos VTM-Het Laaste Nieuws has found.

The Flemish are largely in favour of the implementation of a law which would limit the time required to form a government to a maximum of six months, before automatically calling elections (currently it’s unlimited), while French-speakers largely reject the idea. In case of new elections, the extreme-right Vlaams Belang and Socialist PVDA would make big gains, while traditional parties would lose seats. (Alexandra Brzozowski | EURACTIV.com)

Will Austria miss its national climate targets? Citing a ministerial paper (meant for internal use only), experts said Austria’s new bundle of climate measures, due for parliamentary approval on Wednesday, would cut emissions until 2030 compared to 2005 by merely 27% instead of the agreed 36%.

The paper was published by the Austrian NGO Global2000, who accused the government of intentionally deceiving the public about the state of national climate policy.

The government called the paper “out of date” (it was drafted on 29 November), claiming that the measures have been adapted so that Austria will reach all climate targets. (Philipp Grüll | EURACTIV.de)

No extension Boris Johnson will attempt to put the pressure back on the EU by legally ruling out the prospect of extending the Brexit transition period, his team confirmed on Monday. The newly elected Tory Prime Minister plans to amend the Withdrawal Agreement legislation to prevent the transition period being extended beyond December 2020, giving a tight timeline to negotiate and ratify a new trade and political partnership with the EU. (Ben Fox, EURACTIV.com)

‘Light’ cannabis weeded out. During the final vote on the budget law in the Senate, ichair Elisabetta Casellati declared some amendments inadmissible, including one that would have allowed the purchasing of a lighter cannabis compound containing less than 0.5% of the active substance tetrahydrocannabinol (THC).

The decision was hailed by the right-wing parties and contested by Five Star Movement MPs, who called for her resignation. Lega’s leader Matteo Salvini, who already declared war on legal light cannabis shop when he was Interior Minister, publicly thanked the president of the upper house for avoiding “the shame of a drug-dealer State.” (Gerardo Fortuna | EURACTIV.com)

Opposition against extreme police violence. Syriza secretary-general Panos Skourletis has lashed out against the conservative government’s “tolerance” of police extreme violence against young people. A 22-year-old student denounced a police officer who allegedly asked her to “get naked” in public in the middle of a central street of Athens as part of a regular control.

“You [government] cannot allow this kind of behaviour, you can’t pull pupils out of cinemas because they watch the Joker movie […] you can’t humiliate young people in this way,” Skourletis said. Syriza claims that New Democracy “tolerates” extreme police violence to please its “far-right” audience. (Sarantis Michalopoulos | EURACTIV.com)

Showman to enter politics. A new political force is likely to rank third if new elections are held, according to an opinion poll. As SEGA, EURACTIV partner in Bulgaria, writes, the party “There is no such country” of TV showman Slavi Trifonov is likely to obtain 8,6% and place third, according to Alpha Research agency. The same poll puts Boyko Borissov’s GERB party at 21,7% and the opposition Bulgarian Socialist Party (BSP) at 18,2%.

Trifonov’s party was recently refused registration, allegedly for using the colours of the national flag in its logo, which is forbidden by the constitution.[More background on Slavi Trifonov here.] (Georgi Gotev, EURACTIV.com)

Nuclear power needed. “If we don’t proceed with the construction of another unit of the Krško Nuclear Power Plant and close the thermal power plants, we will not reach a carbon-neutral society by 2050”, Prime Minister Marjan Šarec has told the National Assembly. (Željko Trkanjec | EURACTIV.hr)

IMF: Future is in the hands of Croatian people. The International Monetary Fund (IMF) said in a statement that Croatia is deepening its integration with Europe and that the ERM-II process currently underway sets the stage for euro adoption.

“These changes will ease some of the current economic and financial frictions that EU membership alone cannot remove. Yet, the long-term future of the country still very much lies at home. It is in the hands of the Croatian people to help make the country more dynamic today, for a better tomorrow,” said the Fund.  (Željko Trkanjec | EURACTIV.hr)

Read also on EURACTIV.hr an analysis on Russian stock market.

Serbia appeals to Malta to postpone deportation orders. The Serbian Ministry of Foreign Affair urged Malta on 16 December to postpone the execution of a decision to deny a residence status to Serbian children whose parents’ annual income does not meet the country’s financial requirements until the next consular consultations between the two states, scheduled for 27 January 2020.

Turkish citizen will not be extradited. The Court of Bosnia and Herzegovina rendered a decision annulling the expulsion of Fatih Keskin, a Turkish citizen, who was threatened with extradition and prosecution in his country for opposing the regime of Recep Tayyip Erdogan. Ankara connects him to the opposition FETO movement led by Fethullah Gülen. (Željko Trkanjec | EURACTIV.hr)

Israel signs €31 million defence deal with Montenegro. Israel and Montenegro signed their first €31 bilateral defence deal on Sunday, according to the Jerusalem Post. Yair Kulas, head of the International Defence Cooperation Directorate of Israel’s Defence Ministry, described the sale as a “stepping stone”, which will help deepen the cooperation with Montenegro, a strategic NATO ally and a “friend of the State of Israel.” (Željko Trkanjec | EURACTIV.hr)