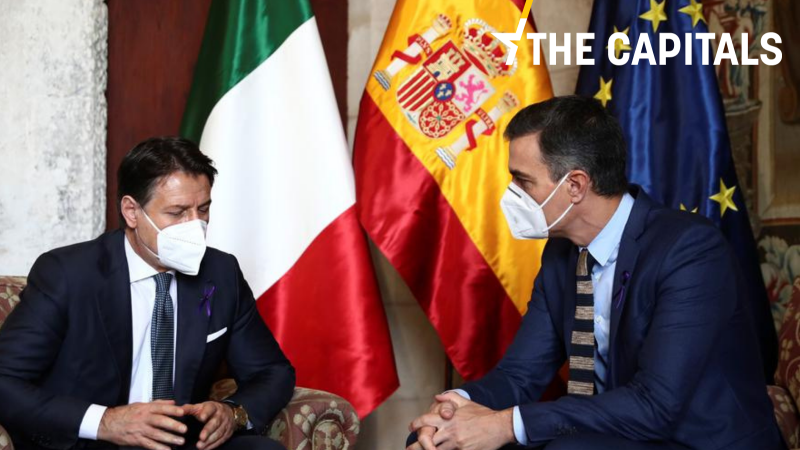 Before you start reading today’s edition of the Capitals, feel free to have a look at our interview with Commissioner Dombrovskis: ‘Not feasible a deep and comprehensive trade deal with the US’ by Jorge Valero and the article Existing guidance appropriate for gene editing assessment, says EFSA by Natasha Foote

Sassoli ‘irritated’ about French Strasbourg pressure. The European Parliament President David Sassoli expressed “astonishment and irritation” at France on Wednesday for publicly demanding that the EU’s legislature return to its official seat in Strasbourg. Read more.

Leaders of Spain, Italy, Greece and Malta called on Wednesday for greater European solidarity with member states most affected by illegal immigration flows.

The joint declaration was signed during a Spanish-Italian summit held on Palma de Mallorca by Spanish Prime Minister Pedro Sánchez and Italian Prime Minister Giuseppe Conte, together with their Greek and Maltese counterparts.

However, they demanded more solidarity from the rest of the EU, and not only from countries through which migratory flows enter, and asked for this aspect to be clearly defined in the new EU migration pact.

The Mediterranean plea brings them yet again on a collision course with the Visegrad countries who already rejected the EU’s ‘mandatory solidarity’ plans for handling migrants.

Read more on the declaration and background here.

German cabinet committee agrees to €1 billion anti-racism package. A committee in the German cabinet agreed to 89 measures on Wednesday to combat the rise of right-wing extremism and racism in the country. The measures will be presented to the full cabinet next week. Read the full story here.

French skiers to forego ‘Christmas on the slopes’. Skiing will not be permitted during the Christmas period, French President Emmanuel Macron announced on Tuesday night in a televised speech where he laid out the country’s new health measures. Read more.

Virus slows down in Belgium. The COVID-19 infection rate is now lower in Belgium than in neighbouring countries, Netherlands, Germany, France and Luxembourg, virologist and inter-federal COVID-19 spokesperson Steven Van Gucht said on Wednesday. He, however, warned the country is “still a long way from the safe harbour” as “pressure on hospitals is decreasing, but still remains high.”

At the same time, Federal Minister of the Self-Employed, David Clarinval, speaking ahead of the Consultation Committee meeting on  Friday, pleaded that all stores in Belgium should be reopened “as soon as possible” as otherwise, Belgians would consider going shopping in neighbouring countries where stores remain open. (Alexandra Brzozowski, EURACTIV.com)

Luxembourg parliament validates new COVID-19 measures. Luxembourg’s new COVID-19 measures will come into force on Thursday, after 31 MPs of the DP-Déi-Gréng-LSAP majority voted in favour. The opposition, which vote against the measures, have criticised the government for the proposed measures’ “lack of coherence”.

The new measures adopted on Wednesday are intended to offer a prospect of improvement in time for Christmas, according to members of the government majority. (Anne Damiani | EURACTIV.com)

Irish PM says “good result” in UK trade talks possible. Ireland’s prime minister Micheál Martin said on Wednesday there was still time for a “good result” in trade talks between Britain and the EU, though the bloc’s chief executive said the risk of a no-deal split on 31 December remained. Read more.

COVID-19 causes political rift between Finnish government and City of Helsinki. Although the 15% increase in hospital admissions in the city of Helsinki has prompted the closing of facilities, cancelling public events and applying distance learning, there appears to be a clear rift between key decision-makers in the city and government, to the point that they find it hard to agree whether they have attended the same meetings or not. Read more.

Italians could be back in school by December. Two of the government coalition parties, 5-Star-Movement and Italy Alive, are asking for the return of in-person-schooling as of 9 December. Read more.

Polish Senate opposes government’s EU budget veto. The Polish Senate adopted a resolution prepared by the opposition Civic Coalition, calling on the government to adopt the negotiated draft EU budget which it vetoed, together with Hungary. Read more.

Czech environment ministry looks into ‘poisoned river’. Another suspected pollutant has been found in the Czech Bečva River, after the river was first found to have been contaminated with cyanide in September, killing all living organisms along a 40-km stretch, including over 32,000 tonnes of fish. Read more.

Former Slovak state secretary confesses after months in custody. Former State Secretary at the ministry of justice, Monika Jankovská has started to cooperate with law enforcement bodies after nine months in custody, giving a confession confirming her involvement in influencing judges, accepting a bribe and abusing public office.

The deposition of Jankovská, who was nominated by the former government party Smer-SD, could be key in prosecuting several judges currently in custody and charged with similar crimes.  (Zuzana Gabrižová | EURACTIV.sk)

How most Hungarian media helped discrimination. Media watchdogs have been sounding the alarm over the shrinking space for media pluralism in Viktor Orbán’s Hungary. Discrimination of ethnic and social minorities has evolved in the country and the development of its media landscape played a role. Read the story here.

Bulgaria to enter ‘soft lockdown’. Bulgaria will tighten its COVID-19 restrictions as of Friday at 11:30pm, the government announced after the country recorded the highest virus-related mortality rate in the EU and the second-highest in the world. Read more.

Romanian president takes sides, makes things awkward. It is no secret that Romanian President Klaus Iohannis would like the National Liberal Party (PNL, part of EPP) to form the government following the elections set for 6 December. Although he is the biggest supporter of the current PNL government and has been attacking the social democratic party PSD for months, things have become awkward in the past few days. Read more.

Croatia scraps annual employment quotas with new law. There will no longer be an annual quota for the employment of foreign nationals in Croatia, according to the new Foreign Nationals Act adopted by parliament, which will enter into force on 1 January 2021. Read more.

Slovenia waits for EU’s ski season guidelines. The Slovenian government has not yet taken a position regarding Italy’s appeal to close ski centres around Europe during the December holidays, the economy ministry told national press agency STA. The ministry expects the European Commission to send recommendations for the skiing season to member states. (Željko Trkanjec | EURACTIV.hr)

Highway between Niš and Priština funded in part by EBRD, EU. The European Bank for Reconstruction and Development (EBRD) announced on Wednesday it will provide a loan of up to €85 million for the construction of a 39-km section of the “Peace Highway” between the cities Niš and Pločnik in the south of Serbia. Read more.