Chancellor Merkel took part in a Bavarian government cabinet meeting at the Herrenchiemsee Castle at the invitation of Premier Söder. [EPA-EFE | Frank Hoermann/Pool]

Chancellor Angela Merkel attended a Bavarian government cabinet meeting on Tuesday morning (14 July) at the invitation of state leader Markus Söder (CSU). The meeting was seen as “a sign of reconciliation” between the two most popular German politicians, after several years of cold relations. EURACTIV Germany reports.

Even the protest against the government’s agricultural policy staged on the fringes of the meeting could not dampen the harmony. “It has been a great day so far, not only in terms of location, weather and atmosphere but also in terms of content,” Söder told a joint press conference.

The Chancellor’s visit was “both a great joy and an honour,” he said. The further handling of the coronavirus pandemic as well as the German EU Council Presidency were on the agenda, and Söder described their exchange as “a very large consensus.”

These words come in stark contrast to earlier conflicts between the two, and the Bavarian leader even called the joint meeting a “sign of reconciliation.” 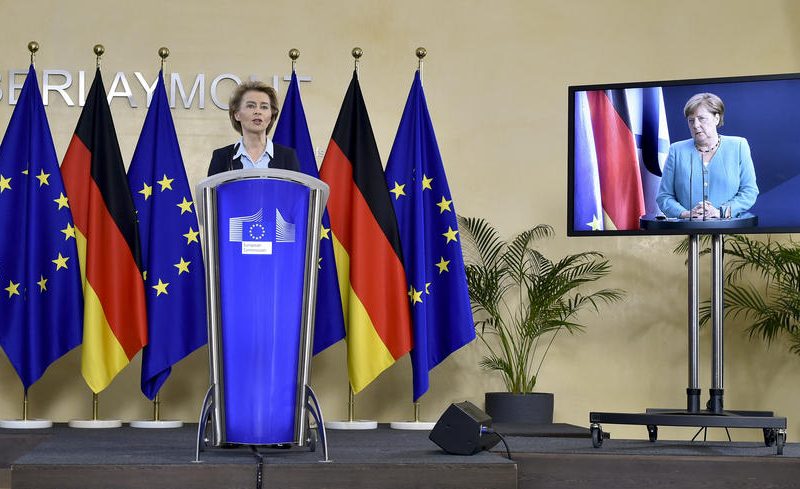 They have ruled Germany together for 15 years. Now they are at Europe’s helm. With the start of the German EU Presidency, Chancellor Angela Merkel and European Commission President Ursula von der Leyen have, together, forged plans to navigate Europe out of crisis, EURACTIV Germany reports.

Söder was probably also alluding to past difficulties in the relationship between the CDU and its Bavarian sister party. In particular, a dispute over the CSU’s disapproval of the federal government’s post-2015 refugee policy escalated in the summer of 2018. At the time, even a break-up of the CDU/CSU union seemed conceivable.

Not only did Interior Minister Horst Seehofer (CSU) publicly criticise the Chancellor; Söder also distanced himself from her.

Unlike his predecessors, he largely refrained from joint appearances in the 2018 state election campaign. Instead, he showed up at a closing rally with Austrian Chancellor Sebastian Kurz (ÖVP), whose country shares a “common conviction and attitude” with Bavaria in its refugee policy, according to Söder.

After the CSU’s historically poor result in the subsequent state elections in October 2018 and its first-ever loss of the absolute majority in Bavaria, Söder attributed this to politics at the federal level, which “did not always made things easy for the great campaigners”.

Joint front against the pandemic

However, all seems to have been forgiven and forgotten. Paving what Söder called “positive way forward” was something he already started to do last year. Instead of appealing to voters further to the right of the CSU, he set his sights on dissociating himself from the far-right AfD party and put green issues at the centre of the political agenda.

Merkel and Söder had also worked closely together and followed a similar course during the coronavirus crisis, pleading for slow openings and repeatedly warning of the danger of a second wave of infection.

In addition, Söder held the rotating chairmanship of the State Premier’s Conference in spring, thus leading the state leaders’ consultations with the Chancellor.

Around three months after the outbreak of COVID-19 in Germany, public approval of the Christian Democrats (CDU/CSU) and confidence in Chancellor Angela Merkel remain high.  Nevertheless, Merkel is still ruling out a fifth term in office. So how does it look for her potential successors? EURACTIV Germany reports.

Speculation on the ‘Chancellor question’

Numerous experts in Germany had speculated about the significance of the meeting for the so-called ‘Chancellor question.’

For months, Söder has ranked second behind Merkel in surveys as the most popular politician in Germany. According to the polls, he is also considered the most promising candidate to succeed Merkel.

The latest Politbarometer survey showed two-thirds of the population find Söder to be a suitable chancellor candidate. At the beginning of March, the figure was around 30%. The other two candidates for CDU chair (and thereby considerations for chancellor candidate), Friedrich Merz and Armin Laschet, fall significantly behind.

Merkel, however, announced on Tuesday that she would also visit other state cabinets, provided she was invited to do so, “regardless of whether or not they apply for the CDU chairmanship.”

She also wants to exercise particular restraint in the question of her successor. “I can only say that Bavaria has a good premier,” Merkel said.