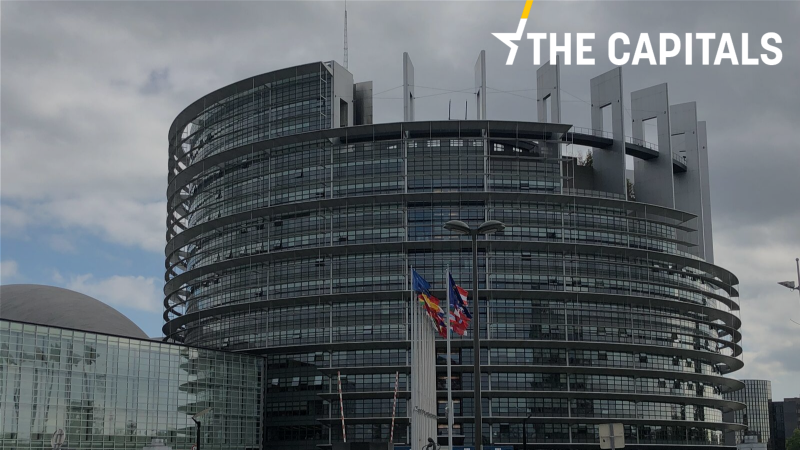 The Capitals brings you the latest news from across Europe. [Photo by Sarantis Michalopoulos]

Strasbourg: EU lawmakers from the European United Left/Nordic Green Left (GUE-NGL) have held an intense and divisive discussion over the environmental impact of the European Parliament’s plenary sessions in Strasbourg.

On the eve of the UN’s climate action summit, Sira Rego, a Spanish MEP from Izquierda Unida, a faction of Podemos, told a recent group meeting that the left needed to take specific actions such as a “climate strike” or abstention from the EU plenary session in Strasbourg. The transportation of hundreds of people from Brussels to Strasbourg every month has a significant environmental impact that needs to be addressed and a “symbolic strike” could deliver the appropriate message, she said.

That triggered an angry reaction of Manuel Bompard, a French MEP of the far-left La France Insoumise, whose founder is Jean-Luc Mélenchon.

Bompard said it would be difficult for the French delegation to support the argument, as the decision to have Strasbourg as the second official seat of the EU Parliament was a result of history. He pointed out that the transport of products in terms of the CETA EU-Canada trade deal, for example, has a greater environmental impact than transport to Strasbourg.

Kostas Arvanitis, a Greek Syriza MEP, reacted, calling on Bompard to think wider and beyond the national interest.

“In many points, I notice that the national interest goes beyond the general political issue. Sira’s proposal eventually disturbs some people ‘because we are French’. We have to gradually get over this approach and view our group not in the context of national ultra-conservative interests,” Arvanitis said.

As a result of a 1992 decision by EU national governments, Strasbourg became the official seat and the venue for most of the plenary sessions of the EU Parliament, but its parliamentary committees and political group meetings take place in Brussels.

In the previous legislature, a majority of MEPs called for the abolition of the Strasbourg seat, but France’s veto makes any change highly unlikely.

Regarding climate change, several leftist MEPs noted the Greens have the “monopoly” of dealing with Europe’s green agenda, as well as a privileged relationship with NGOs, and this should come to an end.

The EU left is trying to find its feet following the defeat in the last EU elections but remains fragmented. Critics suggest that it’s hard to achieve coherence in the group due to some extremely far-left groups, which are “isolated in the past” and prevent the group from opening its doors to collaboration with others.

As an indication of ongoing divisions, the group took more than one hour to adopt the minutes from the meeting, sources said.

But, it’s not the first time that Mélenchon’s party has been criticised by its EU family. In an interview with EURACTIV, leftist former GUE-NGL chief Gabriele Zimmer said Mélenchon has created some “problematic situations” with his behaviour.

Barclay urges agreement with the EU on Brexit. Brexit minister, Stephen Barclay, urged on Thursday all parties involved in the UK “divorce” to reach a deal, and suggested the possibility of negotiating the Irish backstop after 31 October, to facilitate a final agreement on the withdrawal of the UK from the EU, EURACTIV’s partner EuroEFE reported.

“Why take the risk of materialising something on 31 October when we can work until December 2020?” Barclay asked at a conference in Madrid. “Now we cannot reach an agreement if the backstop continues,” he added.

The backstop is a clause of the agreement negotiated between the government of former British Prime Minister Theresa May and the EU according to which Northern Ireland would remain in the internal market until there is agreement on the future relationship between the EU and the UK.

“We need an ingenious solution. If there is a backstop now, we will not be able to reach an agreement,” Barclay said. “The United Kingdom wants an agreement, but there is little time left.” (EuroEFE.EURACTIV.es)

French and German against trade war with US.“We continue to reach out to our American allies,” Economy Minister Bruno Le Maire told a press conference with his German counterparts in Paris on Thursday.  “We do not want a trade dispute with the United States… But if the United States were to impose sanctions on us (they), we must know that we would be ready to respond, again within the framework of the WTO and the opportunities it will give us in a few months,” he added.

“It does not seem to us a good policy to have the United States imposing sanctions on Europe on the basis of the WTO decision and then Europe reacting a few months later,” he said. Bruno Le Maire. Read more here.

BERLIN
No climate ambition. The ruling coalition in Berlin plans to invest hundreds of billions of euros in climate protection by 2030, according to a draft document seen by AFP on Thursday (19 September). The draft also suggests the coalition could not agree on several major issues, meaning the expected CO2 savings do not even reach half of what would be necessary for Germany to meet its climate targets by 2030. The much-awaited document is to be released today, when some 500 climate marches are scheduled all over Germany, as part of the biggest climate protest ever in the country. Chancellor Merkel’s government coalition is racing to put together a major climate action package before UN Secretary-General António Guterres’ climate summit in New York on 23 September. (Claire Stam, EURACTIV.de)

A ‘sustainable’ government. Asked about Matteo Renzi’s breakaway from the Democratic Party (PD), Italy’s PM Giuseppe Conte said he was surprised by the timing chosen for the split but that the government is still “sustainable”. However, a prominent figure from the Five Star Movement, Alessandro Di Battista, warned party supporters about PD’s loyalty.

Climate decree. The new government is working at its first legislative act, which will be called the Climate decree. The measures under discussion include a fiscal bonus of €2,000 for disposing of cars fitted with engines under EURO-4 category, a 20% discount on foodstuffs and body care products not using plastic packaging, as well as a fund of €10 million to finance the deployment of low emissions school buses. (Gerardo Fortuna, EURACTIV.com)

The Greek proposal aims to take measures and create mechanisms to protect cultural and natural heritage by increasing its resilience and ability to adapt, and to promote research and education. The Greek initiative has the support of the World Meteorological Organisation (WMO) and UNESCO and was among nine flagship proposals selected by UN Secretary General Antonio Guterres to be discussed at the upcoming climate summit.

More American soldiers? The large American military drills in Europe will also take place in Poland next year, from March to August. According to Polish daily Rzeczpospolita, there is a possibility that some of the American soldiers and equipment might stay in Poland after the drills are over in order to bolster NATO’s eastern flank. Polish authorities are said to be in talks with the Pentagon. However, the recent cuts in financing for the Pentagon’s projects in Poland and the high offered price for F-35 jet fighters indicate that increasing the number of troops in Poland is not a top priority for the US.

New poll. According to the latest poll released by Gazeta Wyborcza ahead of the October parliamentary elections, the ruling Law and Justice (PiS/ECR) leads with 43% followed by European Coalition (EPP) on 30%, and the Left (11%). Furthermore, 75% of respondents have said they are certain they will vote. The turnout in the EU elections was 53%. (Łukasz Gadzała, EURACTIV.pl)

EU Employment committee chair to run in Slovak elections. MEP Lucia Ďuriš Nicholsonová, the chair of Employment committee in the European parliament, is likely to feature as number 2 on the candidate list of her party (SaS/ECR – currently in opposition) for the Slovakia’s general elections in February 2020. For this reason, she also reversed the suspension of her membership in the party. In this show of loyalty to the party chairman Richard Sulík, who has faced challenges to his leadership position within the party, she also brings her considerable popularity with voters. “The next democratic government coalition will require strong SaS,” she wrote explaining her decision. It remains unclear whether Nicholsonova will actually take up a seat in the national parliament, given her high-profile role in the EP (she was elected after Beata Szydlo failed to gain support). (Zuzana Gabrižová,EURACTIV.sk)

I got your back, Andrej. Czech President Milos Zeman has announced on Thursday night that if the state attorney reopens the EU funds fraud case against PM Andrej Babiš, which was recently dropped, he will use his constitutional right to stop it.

“It is a harsh message, a hard blow of the power duo Zeman-Babiš to all who believe in the principles of justice and equality before the law,” leader of the opposition Civic Democrats Petr Fiala said. Other opposition politicians reacted in a similar manner. (Ondřej Plevák, EURACTIV.cz)

Step back on pension’s reform. The Croatian government will lower the country’s retirement age back to 65 from 67 following a protest campaign led by leading trade unions, Prime Minister Andrej Plenković said on Thursday. “By this, we show that we listen to what our citizens tell us. However, some of our citizens want to carry on working beyond the age of 65 and we will make it possible in a revised (pension) law proposal,” Plenković told a cabinet session. Three top trade unions collected a petition of more than 700,000 citizens’ signatures last spring to force a referendum on the government’s decision under the slogan “67 is too much”.

The European Commission has praised the pension reform, considering that the Croatian public pension scheme costs almost €5 billion a year, but cannot be covered by workers’ contributions and the budget has to raise about €2,5 billion from taxes annually to cover the shortfall.

Joint Serbian and Chinese police patrols in Belgrade. Joint patrols of Chinese and Serbian police officers have begun operating in Belgrade, with the task of, among other things, facilitating Chinese tourists’ stay in Serbia.

The Chinese and Serbian police officers will patrol the city centre and the Belgrade airport together, with joint operations set to run in two more cities: Novi Sad and Smederevo.

Serbian Interior Minister Nebojša Stefanović said the Chinese accounted for the majority of tourists in Serbia, and that their number in 2019 was expected to be 40% higher than in 2018.

Chinese Ambassador Chen Bo said that cooperation between the two countries was developing fast and that due to the growing number of Chinese nationals visiting Serbia it was important to form joint patrols.

“Since the visa-free regime came into force, the number of Chinese tourists in Serbia has soared, and the patrols will help those tourists feel safer in Serbia,” said Chen Bo, adding that the Chinese police would not only keep the peace, but also act as Chinese ambassadors to Serbia. (beta.rs,EURACTIV.rs)