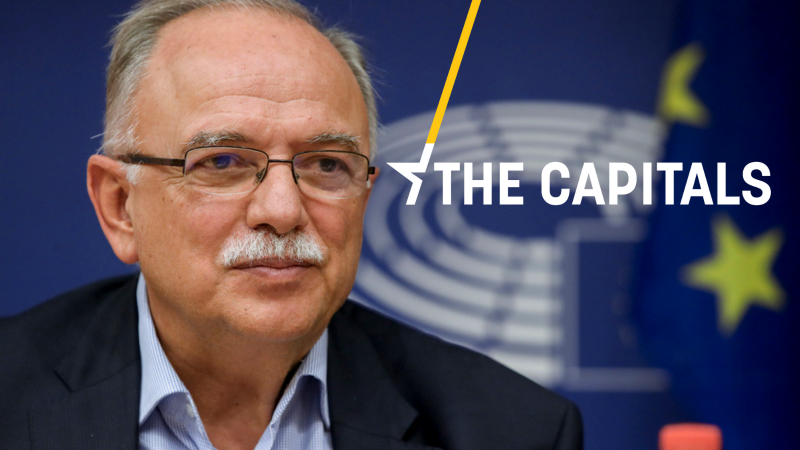 The Capitals is EURACTIV's daily newsletter from across Europe. [European Parliament]

MEPs seek convergence among ‘progressive’ EU Commission candidates: A number of MEPs from the centre/left have sent a letter to the candidates for the European Commission top job of the European socialist, green and left parties, asking them to reach the broadest possible convergence before and after the EU elections in May.

The Progressive Caucus, an informal group of MEPs from the leftist GUE-NGL, the Greens and socialists (S&D), sent the letter on Tuesday (12 March).

Greens have already picked two co-Spitzenkandidaten, Ska Keller and Bas Eickhout, while the S&D will rally behind Dutch Commission First Vice-President Frans Timmermans. The European Left will back Nico Cue and Violeta Tomic.

According to the letter seen by EURACTIV.com, the Progressive Caucus is asking the candidates to share their political priorities on 10 points – including promoting social justice, sustainable growth, democracy, transparency and solidarity – before the end of March.

“The aim of this initiative is to seek the greatest possible programmatic convergence among the candidates of the left and the progressive forces both pre-election and especially after the EU elections,” Dimitris Papadimoulis, vice-president of the European Parliament, told EURACTIV.

According to Papadimoulis, a close ally of Greek premier Alexis Tsipras, the objective is twofold.

“Firstly, to establish the broadest possible progressive alliance for the change that needs to be made in Europe, and secondly, to prevent Mr Weber’s election to the Presidency of the European Commission, which can only be implemented with a right-wing and Salvini-style far-right alliance,” he said.

The Progressive Caucus has taken a number of initiatives so far to bring these groups closer. One of them was an event in the European Parliament last November all presidents of the groups sat on the same panel for the first time.

All leaders agreed on a clear, progressive pro-EU direction, while Ska Keller said that, in order to translate it into action, “majorities at the member state level are crucial.”

EPP Spitzenkandidat Manfred Weber has said he will work as a “bridge” with the rising voices in the EPP’s right wing. However, in an interview with EURACTIV Czech Republic, Weber said a stronger Europe is only possible with clear pro-European parties, whether it is Social, Liberal, Greens or the EPP.

“That is the area where I look for readiness of cooperation and to work together.”

French President Emmanuel Macron’s En Marche is increasingly likely to be a kingmaker in the next EU Parliament. Weber considers Macron an ally but the French leader has said he is seeking a “progressive coalition”. (Sarantis Michalopoulos, EURACTIV.com)

Lifelong sentence: French-born jihadist Mehdi Nemmouche, who murdered four people at the Jewish Museum in Brussels in May 2014, has been jailed for life. Prior to the attack, he spent a year fighting with ISIS in Syria. Nacer Bendrer, the man who helped plan the attack and supply weapons, was sentenced to 15 years in prison. (Alexandra Brzozowski, EURACTIV.com)

Brexit drama: In a last minute dash to Strasbourg, UK Prime Minister Theresa May took part in late-night talks with Commission President Juncker and EU Brexit Negotiator Michel Barnier ahead of a crunch vote on her Brexit plans on Tuesday (12 March).

May and Juncker announced that they had agreed “legally binding” assurances on the backstop in a bid to avoid a hard border between Northern Ireland and Ireland, while Juncker reminded the UK that they will be obliged to take part in the May EU elections in the case of a delay.

AKK-Merkel on the same EU line: German Chancellor Angela Merkel said on Monday (11 March) CDU-leader Annegret Kramp-Karrenbauer’s EU proposals were a “very good concept for the future” and a “clear compass” for the party in the EU elections.

Arms trade. Several social-democrat (SPD) MPs said on Monday (11 March) their parliamentary group should back a definitive ban on arms exports to Saudi Arabia. The move will put the SPD group at odds with Foreign Minister Heiko Maas (also SPD), who recently talked in favour of a softening of the current export ban as a condition to enable a peace process in Yemen. A study released by the Stockholm International Peace Research Institute showed that Germany increased its exports by 13%. From 2014 to 2018, its share in the global arms trade was 6.4%, compared to 6.1% between 2009 and 2013. Submarines were the best-selling German weapons. (EURACTIV.de)

Stop the treaties, stupid: Jean-Luc Melenchon, leader of the leftist France Insoumise party, launched on Monday his EU election campaign recycling the motto “It’s the economy, stupid”. He called for an exit of the EU treaty and a U-turn in economic policies.

According to him, EU treaties are organised to allow a permanent “feast for finance” and only bring ecological and social misery. In the polls, he gets 7% of votes compared to the 20% he got in the 2017 presidential election.

Unhappy organic farmers: The French union for organic agriculture is unhappy with a government plan to reduce subsidies from five to three years for farmers turning green. “If someone can stand three years, he is off to a good start”, agriculture minister Didier Guillaume said last week. (EURACTIV.fr)

Doing business: According to business website Aleo.com, Poland lags behind many European countries in terms of doing business. It comes 23rd out of 30 examined states. Particularly, Warsaw got poor results in the time needed for business registration and the red tape right after a company is set up.

Should Tusk retire?: In an interview with Polish weekly Do Rzeczy, MEP Jacek Saryusz-Wolski, said compatriot EU Council President Donald Tusk, should resign after the end of his term. “Normally, someone of his position does not embrace another post in Brussels. He should retire, as his predecessor Herman van Rompuy did”, Saryusz-Wolski said. (EURACTIV.pl)

Berlusconi is (almost) everywhere – In a radio interview, Silvio Berlusconi announced he would be the Forza Italia (EPP) candidate in four out of five Italian constituencies for the next EU elections. He will not run in the Central Italy district, in order not to hinder the re-election of “our Antonio Tajani, who is considered in Europe as the best president in the history of the European Parliament.”

Still pending issues: Under the post-bailout surveillance, the Eurogroup hailed the Greek government’s progress in reforms but noted that there were still issues to be addressed, such as Non Performing Loans. It decided to postpone disbursing €1 billion and the issue will be discussed on 5 April.

New tender for coal fire-sale: Following a failed attempt, the government launched a new tender call for the privatisation of four Public Power Corporation (PPC) lignite-fired electricity plants. The process will be completed by 19 March. It is the first time that such a fast track procedure is adopted before a Eurogroup meeting apparently under pressure from the EU institutions. PPC’s president and CEO warned that if the tender fails again, it would be the European Commission’s fault. (Theodore Karaoulanis, EURACTIV.gr)

Slovakia refuses US money: The Slovak Ministry of Defence (MOD) officially refused a €105 million US investment into the European Deterrence Initiative program, initiated in 2014 by Washington to increase the US presence in Europe for security purposes following the annexation of Crimea from Russia.

Although the resources were designed to improve the basic aerospace infrastructure of two military airports, the Slovak MOD claims the US aid intervenes in the sovereignty of Slovakia. “Slovakia has enough of its own sources to finance such projects,“ said Andrej Danko, Speaker of the National Council. (Lucia Yar, EURACTIV.sk)

It’s finally good to be in the EU: Czech President Miloš Zeman, who is well known for his pro-Russian views, said in an interview with Czech News Agency “in today’s unstable world it is good to be integrated into the EU, that is more or less an economic alliance, and part of a military alliance such as NATO”.

Zeman made the statement on the eve of the 20th anniversary of the Czech Republic’s NATO membership. In May, the country also celebrates 15 years of EU membership. (Aneta Zachová, EURACTIV.cz)

TV anchor to run for EU elections: Rares Bogdan, a talk show host on private TV station Realitatea, has agreed to lead the list of the National Liberal Party (PNL, a member of EPP) in the EU elections, sources told EURACTIV Romania. He will run alongside some current MEPs, including Siegfried Muresan, Adina Valean and Daniel Buda. (Sebastian Rotaru, EURACTIV.ro)

PMP against Fidesz: PMP, the centre-right party of former Romanian president Traian Basescu, will vote for the expulsion of Fidesz from the EPP. Basescu said the Hungarian ruling party was breaking EU treaties and opposing the agreements it made when it joined the EU.

Recently, Bulgaria’s deputy prime minister said “there is no way the Belene NPP project can be completed without (the Russian state corporation) Rosatom”. (Dnevnik.bg)

EPP must live with pluralism: Janez Janša, leader of SDS (EPP), confirmed a EURACTIV.hr report suggesting that his party will oppose the expulsion of Hungarian Fidesz party from the EPP. “The EPP is a big party, and big parties must live with differences. There is no problem with posters with Jean-Claude Juncker in Hungary, it is about substantial differences regarding migration policy in the EPP”. (Željko Trkanjec, EURACTIV.hr)

Minister offered resignation: Minister of Regional Development and EU Funds Gabrijela Žalac, who hit a young girl while driving a car without a valid driving licence, offered her resignation, which was rejected by PM Andrej Plenković. The PM said not having a valid licence was an omission and the minister “paid a misdemeanour sentence”, he added.

Theology is indispensable among sciences: During the celebration of 350 years of the Catholic Faculty of Theology in Zagreb, Plenković said education could not be left to the rules of market and profit, and theology has an indispensable place among other sciences. “There is no scientific area from which theology can be excluded to contemplate the reality,” he said. (Željko Trkanjec, EURACTIV.hr)

So far, the obstacles in negotiations have been the quotas for exports of cigarettes, certain types of cheese and brandy. The EEU is comprised of Russia, Belarus, Kazakhstan, Armenia and Kyrgyzstan, and Serbia’s trade with those countries is worth $2.8 billion, 90% of which is with Russia. (Julija Simić, Beta-EURACTIV.rs)