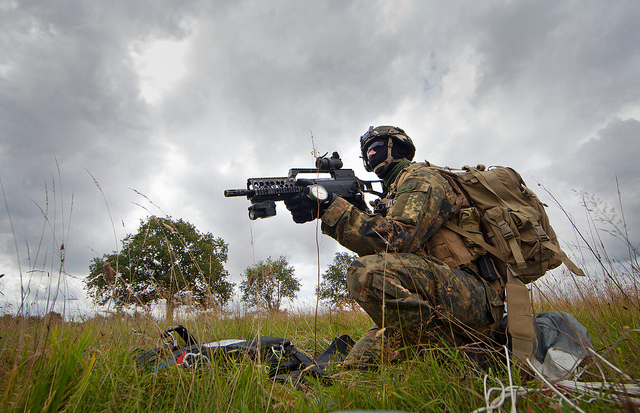 Germany's ministry of defence announced in April that it is investigating 275 suspected far-right extremists in its ranks. [Medien Bundeswehr]

German Chancellor Angela Merkel fully backs her defence minister over her handling of a scandal about far-right sympathisers in the military, her spokesman said on Wednesday (3 May), after the arrest of an officer suspected of planning a racially motivated attack.

Ursula von der Leyen angered the armed forces and some politicians by lambasting “weak leadership” across the military at the weekend, but she has vowed to dig further to get to the root of far-right sentiment, even if it takes a long time.

The chief federal prosecutor is dealing with the case of the 28-year old lieutenant, identified only as Franco A., and a 24-year old student, saying there were “preliminary indications of preparations for a serious attack against the state”.

“The German defence minister has the full support of the German chancellor and the whole German government to shed light on all facets of the case of Franco A., as far as the German armed forces is concerned,” Merkel’s spokesman, Steffen Seibert, told a regular news conference on Wednesday.

The Social Democrats, Merkel’s junior coalition partner, have stopped short of calling for the minister’s resignation, which would damage Merkel five months before a national election. But their candidate for chancellor said von der Leyen, defence minister since 2013, could not evade responsibility.

“The political responsibility can’t fall on the troops,” Martin Schulz said. “Ms. von der Leyen is making everyone responsible for the situation in the army and is behaving as if she herself has nothing to do with it.”

Franco A. was arrested last week after falsely registering as a Syrian refugee in January 2016. Tagesspiegel said he had a list of five possible targets for attacks, including the justice minister and a former German president.

Die Welt reported yesterday that the list included major groups representing Jews and Muslims. Germany is highly sensitive to any signs of far-right extremism in its armed services because of its Nazi past.

Speaking during a visit to the French town of Illkirch, where the suspect was based, von der Leyen, often touted as a successor to Merkel, said digging into the leadership issues revealed by the case was likely to take months.

She said it was unacceptable that the racism evident in a master’s degree thesis written by the suspect had not triggered disciplinary action by his superiors, even though the commander of the French military academy where it had been submitted had rejected the thesis and informed the suspect’s German superiors.

“We are at the beginning of a process that will likely cost us much energy and also strong nerves because additional issues will come up,” von der Leyen told reporters at the base near Strasbourg which houses a Franco-German joint battalion.

Greens lawmakers have demanded information from von der Leyen on any right-wing extremist network in the military.

“That would of course be the absolute horror scenario, if there is any sort of a network that possibly planned violent attacks,” said Greens defence expert Agnieszka Brugger.

A spokesman for the defence ministry said that between 2012 and 2016, 18 members of the military had been suspended from duty because they held rightist views.

He also said that over a longer period of time, there had been around 280 suspected cases of right-wing extremists.

Highlighting the gravity of the scandal, von der Leyen cancelled a trip to the United States and summoned Germany’s 100 top generals and admirals to discuss the case and incidents of bullying, harassment and sexual assault in the military.