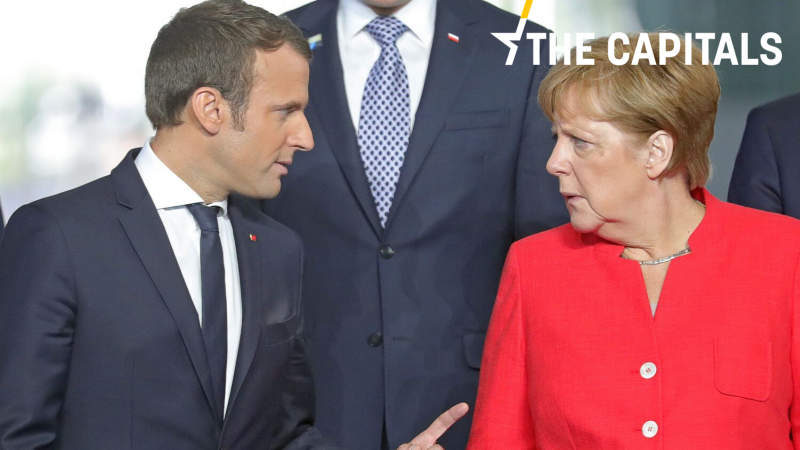 “I don’t think such an all-round blow is necessary, even if we have problems, even if we have to pull ourselves together,” the Chancellor said on Thursday (7 November) after a meeting with NATO Secretary General Jens Stoltenberg in Berlin.

“Emmanuel Macron chose drastic words, that is not my view of cooperation in NATO. The transatlantic partnership is indispensable for us,” the Chancellor added. In her view, there are many areas in which the Alliance is working well. NATO Secretary General Jens Stoltenberg agreed with the Chancellor’s point of view, following a meeting between the two in Berlin on Thursday. “Nato is strong,” he stressed.

“What we are currently experiencing is the brain death of NATO,” French President Macron said in an interview with The Economist, adding that EU countries shouldn’t rely anymore on the United States to defend NATO allies.

Europe stands on “the edge of a precipice, he added, calling on EU member states to start thinking themselves as a geopolitical power and to strengthen EU defence capacity – a portfolio which France’s EU commissioner is set to hold in the next EU executive.

There was “no coordination of strategic decisions between the US and its NATO allies,” he said. (Claire Stam | EURACTIV.de)

Sánchez opens the door to dialogue

Spain’s caretaker socialist PM Pedro Sánchez has opened the door to dialogue with Catalan separatists if they respect the country’s Constitution and leave the “unilateral way” towards independence of the prosperous Spanish (northeast) region, EURACTIV’s partner EFE reported.

“There are areas of dialogue to explore if separatist leaders definitely abandon the unilateral way”, but, he stressed, to achieve this, Catalan separatism must respect the Constitution and abide by the law.

With the Catalan crisis now at its peak, the far-right VOX party is set to cash in, analysts say, with some polls predicting that it could even become the third political force in Spain, after the PSOE  and the conservative People’s Party (PP).

At the April general election, Vox obtained 24 seats in the Parliament, and polls suggest seats could nearly double following elections on Sunday.

Brexit took a back seat on the second day of general election campaigning, with the governing Conservatives and Labour trading promises to ramp up public spending to their highest level in a generation.

The European Commission has lowered its economic growth forecasts for Poland. The European Commission joined the World Bank in lowering its economic forecasts for Poland on Thursday (7 November), predicting in its autumn European Economic Forecast that this year’s GDP growth in Poland will be 4.1% – down from 4.4% in its July forecast. However, that will still leave Poland among the strongest performers in the EU. (Mateusz Kucharczyk | EURACTIV.pl)

Another high-profile resignation. The deputy speaker of the Slovak parliament Martin Glváč (SMER-SD, PES) took to Facebook to announce his resignation on Thursday (7 November). Glváč, a former minister of defence, was in close contact with Marian Kočner, charged with ordering the murder of Ján Kuciak and other economic crimes, and their communication via messaging platforms has been made public. Glváč has denied any wrongdoing. (Zuzana Gabrižová | EURACTIV.sk)

We don’t care about child refugees. The response of Interior Minister Jan Hamáček (S&D)  to Greece’s request to help child refugees located on its islands has provoked a wave of criticism, for example from centrist and pro-European parties.

“I do not see any sense in the relocation of 17-years-old ones who are not entitled to asylum, while Athens receive billions of euros from the EU on border protection and asylum procedure,” said Hamáček.

But Hamáček appears to have the support of PM Andrej Babiš who responded that he “does not care about that”.

“Let’s hope that Europe will finally start seeking a solution to the situation in Syria. We do care primarily about our children, we have lots of our own problems,” said Babiš.

Budapest protests against Erdoğan’s visit. Road closures paralysed Budapest due to the Turkish delegation and the thousands of people protesting against Prime Minister Recep Tayyip Erdoğan’s visit. At their joint press conference, Viktor Orbán and Erdoğan agreed that Turkey’s military operation in Northern Syria is only aimed at allowing refugees to return to Syria.

Referring to last week’s visit of Russian President Vladimir Putin, Orbán said that Hungary is historically determined by the Istanbul-Moscow-Berlin triangle. Orbán also stressed the TurkStream gas pipeline from Turkey to central Europe is being built and Hungary should be receiving gas from the pipeline by the end of 2021.

Erdoğan, answering a question on EU financial support to Turkey regarding refugees from Syria, said: “Whether or not we receive support, we will still care for our guests. However, we cannot handle everything. If we see no other solution, we will open the gates, and I think it is obvious which direction they would go.”

The two leaders have met seven times in the last two years, most recently at the Turkic Council in Azerbaijan on 15 October. Then, Orbán said that Hungary was fighting to get the enlargement and neighbourhood policy portfolio in the new European Commission. “If we succeed … then there will be close cooperation with Azerbaijan within the Eastern Partnership and [EU] membership negotiations with Turkey,” adding that in case Hungary succeeds “we will be happy to be at your service to help your endeavours.” Yesterday, in a mission letter to Commissioner-designate Olivér Várhelyi, Ursula von der Leyen confirmed her intention to entrust the Hungarian nominee with the enlargement portfolio. (Vlagyiszlav Makszimov |EURACTIV.com, Željko Trkanjec | EURACTIV.hr)

Orbán contributed to Trump’s negative view of Ukraine “Those two world leaders [Putin and Orbán] … shaped the President’s view of Ukraine and Zelensky,” said George Kent, the deputy assistant secretary of state in charge of Ukraine policy, according to a transcript of his impeachment inquiry testimony released on Thursday (7 November)q. “Both leaders, both Putin and Orbán, extensively talked Ukraine down, said it was corrupt, said Zelensky was in the thrall of oligarchs, specifically mentioning this one oligarch Kolomoisky, negatively shaping a picture of Ukraine, and even President Zelensky personally.”

When asked about Orbán’s motivation to present Ukraine negatively, Kent said “Orbán’s beef with Ukraine is derived in part to his vision, in my opinion, of a greater Hungary”, mentioning the Transcarpathian ethnic Hungarian minority and Hungary’s negative stance as a NATO member towards Ukraine. “I think Orbán is just happy to jam Ukraine.” (Vlagyiszlav Makszimov | EURACTIV.com)

Romania risks losing EU funding: The new government has warned that Romania risks losing unspent EU funds from the Regional Operational Programme. According to the new minister for EU funds, Marcel Bolos, more than €300 million could be lost unless the authorities quicken the pace of sending the documentation to the European Commission by the end of this year. Romania lost hundreds of millions of euros from the previous multiannual budget due to delays in completing the projects. (EURACTIV.ro)

No snap elections? Political compromise will become even more difficult, but there will be no early elections, Ljubljana’s daily Delo wrote day after left-wing party Levica terminated its agreement to support the government. “Levica will continue to play a similar role, and the government will continue to seek support from the opposition, with a tacit coalition likely to emerge”, said two prominent analysts. Brane Golubovič, leader of leading coalition party – LMŠ-RE – faction in parliament, has announced dialogue with all parties in Parliament. (Željko Trkanjec | EURACTIV.hr)

Minister to present Croatian EU presidency’s education plans Science and Education Minister Blaženka Divjak (independent, from HNS-RE) is in Brussels to present the Programme of Croatia’s upcoming EU Presidency in the field of education. Croatia plans to prioritise the following topics: ‘Teachers for the Future’, ‘Mobility and Brain Circulation’ and a strategic framework for cooperation in education and training until 2030.

PM presents 2020 draft budget Prime Minister Andrej Plenković said that the 2020 draft budget would prioritise further tax cuts and public debt reduction as well as higher salaries. Revenues are projected at €19,54 billion and expenditures at €19.83 billion. Revenues will go up by 5.4% more than in the revised 2019 budget, with expenditures 6% up.

Social Democrat MP and former finance minister Boris Lalovac said that in the event of a new economic crisis, the government did not have any financial instruments to stabilise the economy, apart from possibly introducing a property tax. VAT has been maximised at 25% and is among the highest VAT rates in the EU, excise taxes on tobacco and alcoholic drinks are in ‘the grey zone’, income tax is a ‘squeezed lemon’, and monetary policy cannot be used as an instrument because interest rates are almost at zero,” Lalovac said. (Željko Trkanjec | EURACTIV.hr)

Serbian belt and road. Serbian Minister of Trade Rasim Ljajić emphasised the importance of trade and access to the Chinese market on Thursday. “Compared to the previous year, Serbia has considerably intensified its trade with China, and now it’s doubled: in nine months we’ve exported goods worth $214 million, whereas the whole last year brought in $92 million,” said Ljajic at the Second Chinese International Import-Export Fair in Shanghai. (EURACTIV.rs)

Macron’s comments about the Western Balkans have also provoked an angry reaction from Sarajevo, where President Chairman Željko Komšić said that he would summon French Ambassador to BiH Guillaume Rousson to explain things.

“If you’re concerned about this region, the first question is neither Macedonia or Albania, Bosnia-Herzegovina. The time-bomb that’s ticking right next to Croatia, and which faces the problem of returning jihadists, is Bosnia-Herzegovina,” he said.   (Željko Trkanjec | EURACTIV.hr)