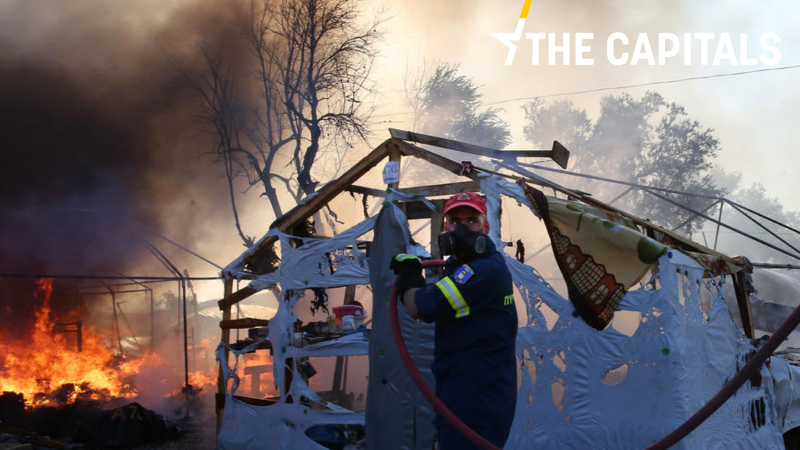 Before you start reading today’s edition of the Capitals, feel free to have a look our fresh weekly newsletter editions of the Global Europe Brief and AgriFood Brief.

Merkel and Macron agree to accept more refugees from Moria. Following the Moria fire, Germany and France said they will be accepting 400 unaccompanied minors from the camp. Chancellor Angela Merkel said she hopes other EU countries will follow suit. EURACTIV Germany has the details here.

Moria haunts Commission migration policy. “Moria is here to remind Europe that we need to change, as it is inconceivable that Europe does not yet have a single coherent migration policy,” said European Commission Vice-President Margaritis Schinas during a visit to Moria refugee camp on the island of Lesbos, destroyed by Tuesday (8 September) night’s inferno leaving thousands without shelter. EURACTIV’s Theodore Karaoulanis has more.

Moria fire poses test for government coalition. Since its launch in January, the coalition between the conservative ÖVP and the Greens had one fault line: migration policy. This was underscored in the Austrian debate about how to respond to the Moria fire.

Foreign minister Alexander Schallenberg (independent, but nominated by ÖVP) stated on Wednesday (9 September) that Austria will not take in any of Moria’s former inhabitants. A day later, the Greens said that they would not accept this. “We are in continuous talks with the ÖVP and will continue to build pressure”, said their foreign policy spokesperson, Ewa Ernst-Dziedzic. (Sarah Lawton | EURACTIV.de)

Launch of COVID-19 tracing app delayed. The launch of a nationwide Covid-19 tracing app has been postponed by a week as the developers are still waiting for an EU opinion, Karin Moykens of the Interfederal Committee Testing & Tracing confirmed on Thursday (10 September).

The final stage of development has been completed, Moykens emphasised. Following the feedback of 80 people from the testing phase, a final, official version is now being developed, which will be tested by some 10,000 people, the Belga press agency reported.

EU issues ultimatum to UK: Brussels issued a stern ultimatum to the UK on Thursday (10 September) to withdraw its bill overriding the Irish Protocol or talks on an EU-UK trade deal will collapse. EURACTIV’s Benjamin Fox reports from London.

Michael in talks with Commission. Taoiseach Micheál Martin has said that he has relayed his concerns over the direction of the Brexit negotiations this week to European Commission President Ursula von der Leyen.

Speaking to RTE News on Thursday (10 September), Martin said that he had been in close contact with the Commission president, and that the UK’s attempts to bypass the withdrawal agreement with new measures set out in the Internal Markets Bill mean that ‘trust has been eroded’.

New lockdown ‘out of the question’. Another total lockdown repeating that seen during the first wave of Covid-19 in Italy is “out of the question”, Italy’s foreign minister Luigi Di Maio has said, adding that Prime Minister Giuseppe Conte had “excluded the possibility too.” EURACTIV Italy has the latest.

Spain supports Greece and Cyprus. As the 7 EU members with Mediterranean coastlines, gathered for a summit in Corsica, France, Spanish Prime Minister Pedro Sanchez said that there is “room” for the EU to have “real dialogue” with Turkey, leading to the de-escalation of tension with Greece and Cyprus. Read more.

In other news, the Spanish government has suffered its first parliamentary defeat with the vote on the decree of the surplus of the town councils. A majority of 16 political formations, almost 200 votes, have repealed it, just a month before the expected deliberations on the 2021 budget bill. Read more in EFE.

Contingency situation likely, Costa warns. From Tuesday (September 15), Portugal will be in a contingency situation due to the COVID-19 pandemic, limiting gatherings to 10 people, according to the measures decided on Thursday in a cabinet meeting and announced by Prime Minister António Costa. Read more.

Greece calls for “severe” sanctions. Several Socialist lawmakers in the European Parliament have floated the idea of imposing an arms embargo, along with sanctions, on Ankara, as the EU gears up for a crucial September summit intended to define its response to Turkey’s activities in the Eastern Mediterranean. Read the full story here.

Meanwhile, Greece’s deputy foreign minister told the same parliamentary committee meeting in Brussels that EU leaders should impose “severe” economic sanctions on Turkey for a limited time if Ankara does not remove its military vessels and gas drilling ships from waters off Cyprus.

Rule of law debate next week. The European Parliament (EP) will debate the situation in Poland on Monday afternoon. On the agenda will be Warsaw’s rule of law conflict with the European Commission and the introduction of ‘LGBT-free zones’ in some Polish regions.

The discussions will be based on a critical draft report on the rule of law situation in Poland, prepared by the head of the EP’s Committee on Civil Liberties, Justice and Home Affairs, Juan Fernando Lopez Aguilar (S&D).

What´s the threat? 50% of Slovakians agree that “Western societies and their lifestyle” are a “threat to their identity and values,” according to a new survey by GLOBSEC, conducted in 10 Eastern European countries. What is more, 53% Slovaks consider the US to be a threat, while 35% say the same about the EU. Among the countries covered by the survey, Slovaks are the most likely to believe in conspiracy theories. (Zuzana Gabrižová | EURACTIV.sk)

The meeting was suggested by the Polish hosts as a gesture of solidarity and supported by Slovakia, but Babiš vetoed it, on the grounds that he did not want to make “a reckless move” before the EU decided on a common position. Read more here. (Ondřej Plevák | EURACTIV.cz)

‘Pure theatre’. After MEP Ivan Vilibor Sincic unloaded a load of watermelons from a van in front of the government house in an attempt to bring attention to the difficulties facing Croatian farmers, Agriculture Minister Marija Vuckovic called the performance “pure theatre”.

While throwing the fruit, Sincic said “hundreds of thousands of other watermelons and other fruit and vegetables will be destroyed this year,” because of imported products, often of a poorer quality, flooding Croatia’s market and systematically destroying domestic production. More on the story here.

64 days of anti-government protests in Bulgaria. The BOEC civil movement protested outside the European Commission representation in Sofia on Thursday (10 September) “to make sure they are heard by Brussels”. They called for suspending EU funding to Bulgaria “because pouring resources in an unreformed country extends the agony and is hypocritical because it strengthens corruption”. Thursday marked the 64th day of anti-government protests in Bulgaria, where protesters insist the prime minister and general prosecutor resign.

In other news, Bulgaria recorded 122 new COVID-cases on Thursday out of 5,145 PCR tests. reaching a total of 17,435. While there are 4,259 active cases, 753 patients are hospitalised and 60 are in intensive care, according to official data. The country’s death toll has now reached 702. (Krassen Nikolov | EURACTIV.bg)

Largest VAT gap. Romania recorded the highest national VAT gap with 33.8% of VAT revenues going missing in 2018, according to the European Commission. While the gap was slightly lower than last year, it remained significantly higher than the EU average of less than 10%. According to EU calculations, Romania lost about €6.6 billion due to fraud and tax as well as bankruptcies and miscalculations.

Meanwhile, Romania obtained €2.7 billion from the European Commission in the ten months under the centre-right government, said Prime Minister Ludovic Orban on Thursday (10 September). ”We must continue to increase the speed of absorption and we pay attention to supporting SMEs, infrastructure and financing measures in the health sector and for fighting the pandemic,” Orban added. (Bogdan Neagu | EURACTIV.ro)

EU expects Serbia to fulfill obligations. Brussels expects Serbia to act in accordance with the strategic goal of EU membership and fulfill the obligations it has assumed within the process of EU accession, the EU’s chief diplomat Josep Borrell has said. Read more here.

In other news, representatives of several Indian pharmaceutical companies are exploring business opportunities in Serbia, after a visit had been cancelled in March due to the Covid-19 pandemic, Indian Ambassador to Serbia Subrata Bhattacharjee said yesterday. Indian pharmaceutical companies were being showcased to Serbian health institutions by the Indian embassy and cooperation could be developed to benefit both countries, the Indian ambassador added. EURACTIV Serbia takes a closer look.