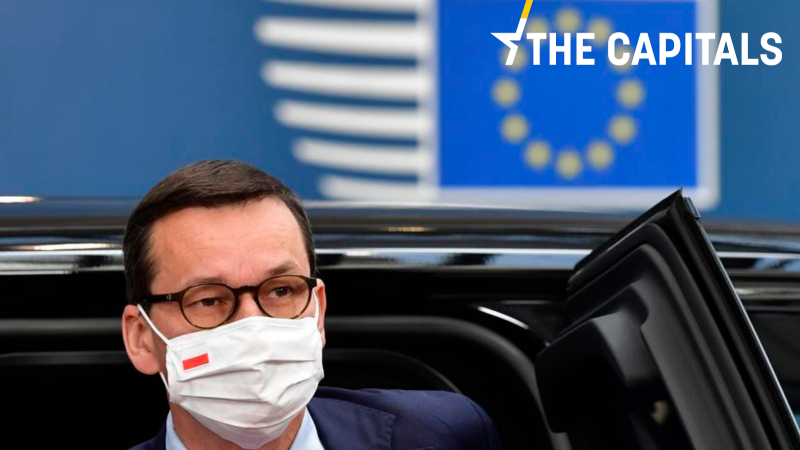 Before you start reading today’s edition of the Capitals, feel free to have a look at the article “Bulgaria spells out conditions for unblocking North Macedonia’s EU path“.

The decision of the Polish government – together with Hungary – to block the approval of the EU budget and recovery fund because of the attached rule of law mechanism was backed by 57% of the Polish population, according to a poll by United Surveys for the daily Dziennik Gazeta Prawna and RMF FM. Read more.

German defence minister: EU security without US is ‘illusion’. “Without America’s nuclear and conventional capabilities, Germany and Europe cannot protect themselves,” German Defence Minister and current leader of the Christian Democratic Union (CDU) Annegret Kramp-Karrenbauer (AKK) told students at the Bundeswehr University in Hamburg on Tuesday. However, going forward, this should change with Europe acting “partner at eye level” instead of a “mentee in need of protection“. Read more.

Sports clubs to reopen for youths as of December. Sports clubs will reopen their doors for children and adolescents as early as December, announced French President Emmanuel Macron after doctors had alerted the Élysée Palace about how young people are impacted by lack of exercise.

The French president also announced the launch of a “sports pass” to help young people in precarious situations practice sports, a scheme that will cost the government €100 million. While this is good news for young people, stadiums will have to remain without crowds until at least the start of 2021, the Élysée announced. (Lucie Duboua-Lorsch  | EURACTIV.fr)

Opening of bars and restaurants unlikely this year. The reopening of Belgium’s hospitality sector is rather unlikely this year, virologists warned amid discussions about an end to the tightened coronavirus lockdown measures. Read more.

Investigators link Vienna gunman with German Islamist. Investigators have linked the gunman responsible for the Vienna terror attack on 2 November with a known German Islamist who acted as a node, connecting radical Islamists all over Europe. The two had been in contact during the months leading up to the shooting. Investigators are now looking into whether they had cooperated to plan the attack. (Philipp Grüll | EURACTIV.de)

European lithium rush may start from Finland. About nine million tons of lithium were found deep down in a bog that is the size of 300 hundred soccer fields near the town of Kokkola on the west coast of Finland. The drillings suggest there could be more to come. Read more.

Italian doctors refute claims hospitals are not under pressure. Doctors have reacted to a statement made by Italy’s COVID commissioner, Domenico Arcuri, that hospitals can still cope with the second wave of the pandemic. More.

Portuguese telecoms expected to fight over 5G licences. Portugal risks taking over the EU Council Presidency in the first quarter of 2021 with the 5G dossier on hold, following the war between operators and regulators over the fifth-generation technology that the European Commission has given priority to.

The award of 5G licences in Portugal is expected to take place when the country takes over the EU presidency. However, the conflict between telecom operators and the national communications authority (Anacom) threatens to suspend the process. By the end of September, 5G commercial services in the EU had been provided in 17 countries. (Alexandra Luís, Lusa.pt)

Rule of law designed to ‘starve out’ Hungary. Hungary blocked the EU’s seven-year budget and recovery package because the rule of law “conditionality [is] in contradiction with the July EU Council deal” of the bloc’s leaders, said Hungarian Justice Minister Judit Varga after the meeting of EU affairs ministers. Read more.

Slovakia does not share Polish and Hungarian position. Slovak Minister of Foreign and European Affairs Ivan Korčok will “appeal“ to his colleagues in Poland and Hungary not to block the compromise deal on the EU´s long-term budget and Recovery Plan negotiated by the German Presidency, the ministry said in a statement.

“The veto from Warsaw and Budapest does not mean the end of negotiations, but the deadline for an agreement is getting close. I do not consider it realistic to completely abandon the rule of law principle in relation to drawing of the EU funds. This is not the way,“ Korčok added. (Zuzana Gabrižová | EURACTIV.sk)

Certain media excluded from press conferences. The International Press Institute (IPI) expressed its disappointment over the lack of communication between the Czech government and Czech media. IPI together with other free press organisations expressed their concerns in an open letter addressed to the government. Read more.

Bulgaria blocks EU accession talks with Skopje, not Tirana. The Bulgarian government has officially announced its veto on the start of EU membership talks with Northern Macedonia but has approved the start of the EU negotiation process with Albania. Read more.

The president said that, in order to maintain the positive trend and have even better results in two weeks time, Romania must hold its course and the population needs to respect the rules.(Bogdan Neagu | EURACTIV.ro)

Serbian envoy kneels before Ovcara memorial in Vukovar. Political representatives of the Serb minority were present on Tuesday in Vukovar to remember the city’s fall and occupation following the aggression started by the former Yugoslav army in 1991. Read more.

No US forces for Slovenia. Slovenia is no longer part of the US “force posture realignment”, announced the US embassy in Ljubljana after Prime Minister Janez Janša told parliament that the country was open to hosting a US rotation unit, sta.si reported. Though the US welcomes Janša’s initiative for Slovenia to host US troops in its country, the US embassy confirmed that Slovenia was not – at least for the time being – being considered as part of the ongoing negotiations regarding the relocation of US forces in Europe.

In other news, Janša told parliament during a budget debate on Tuesday that the media had falsely reported the news concerning Poland and Hungary vetoing the EU budget and recovery fund, sta.si reported. Read more.

No enlargement progress in past six months. Serbia has made no progress on reforms towards EU accession in the fields covered by chapters 23 and 24 from May until October this year, according to coalition prEUgovor, which presented its independent semi-annual report known as “The Alarm”. Read more.

In other news, President Aleksandar Vučić has said that German Chancellor Angela Merkel has always been fair to Serbia, although she does not support Belgrade with regard to the Kosovo issue as it is, according to the German leader, “a done deal, an independent state”. Read more.

Kavalec thanked voters in BiH for taking the time to cast their ballots to invest in a democratic future. She also showed gratitude to poll workers who made voting possible, observers who helped ensure the integrity of the election, and to the media for the professional delivery of timely and adequate information to the public. Portal klix.ba quoted Austrian daily Der Standard stating that BiH citizens voted against corruption and decades of nepotism. (Željko Trkanjec | EURACTIV.hr)

New government jobs in Montenegro open to all citizens. The heads of the parliamentary clubs of the new parliamentary majority reached an agreement with Prime Minister-designate Zdravko Krivokapić on the distribution of functions “by depth”, Slaven Radunović from the Democratic Front announced after the meeting. The new parliamentary majority will pass changes to the law that will enable “the leading staff in administrations and institutions, companies and ministries below the level of the state secretary, to pass some kind of re-election,” he added. According to Radunović, they would apply for those places again with a process open to all citizens. (Željko Trkanjec | EURACTIV.hr)