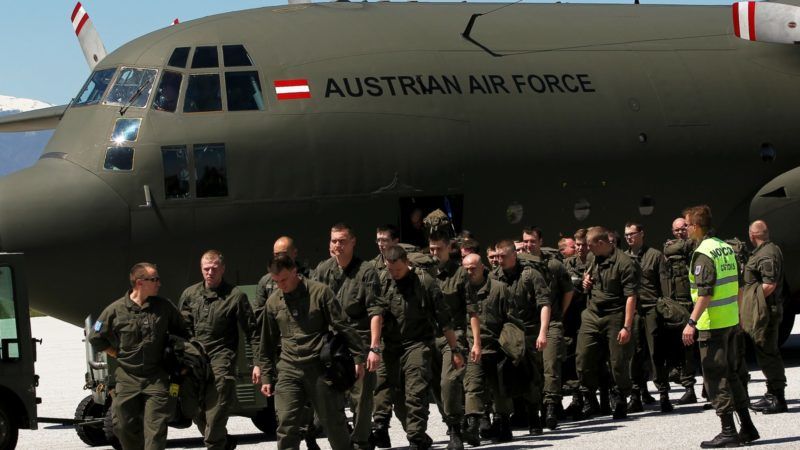 A contingent of Austrian NATO peacekeepers arrive by plane at a military airport near Gjakova. Kosovo, April 2012. [Valdrin Xhemaj/EPA]

NATO reached a deal yesterday (23 May) to unblock partnerships with around 40 non-member countries which had been paralysed by a dispute between Turkey and Austria, officials said.

Turkey, with the second-biggest military in NATO, had vetoed all cooperation with neutral Austria after Vienna called for the European Union to halt membership talks with Ankara.

That, in turn, blocked the whole partnership programme with dozens of other non-NATO countries covering most of Europe, including many countries in the Middle East and Asia.

NATO urged Turkey and Austria today (15 March) to settle a dispute over Ankara’s EU membership bid, which has led Turkey to block cooperation with the alliance’s partner countries.

But on Monday (22 May) the 28 NATO members agreed to change the system so that cooperation “will be planned on an individual basis, rather than collectively”, said a NATO official who asked not to be identified.

“This will substantially reduce the risk of blockages to cooperation with partners across the board,” he said.

Turkey is expected to uphold its veto on Austrian participation, officials said.

Ties between Turkey and Austria have soured badly since Vienna called for the EU to suspend Turkey’s accession bid because Ankara did not meet EU rights and democratic standards.

By blocking #Austria inside #NATO, #Turkey will kick the Austrian army out of #Kosovo https://t.co/JwzqIkw5dN

The NATO official said the alliance was not ending its cooperation with Austria, which was a “long-standing NATO partner and we greatly appreciate its valuable contributions to our shared security”.

“We hope the bilateral issues between Austria and Turkey will be solved as quickly as possible.”

The NATO partner scheme is aimed at building up inter-operability, capacity and goodwill.

Partner countries do not sign up to the NATO collective defence commitment, but the agreements are seen as an important political signal, for example in countries such as Georgia and Ukraine locked in bitter disputes with their Soviet-era master Russia.

Austria has been a neutral country since a Cold War accord between Washington and Moscow agreed on its non-aligned status.

Turkey restarted European Union accession talks in 2005 but they have made painfully slow progress amid growing questions in Brussels over the country’s poor human rights record.

Neighbourhood Commissioner Johannes Hahn, who is also responsible of enlargement negotiations, said today (9 November) that faced with the pressure of some political groups and some member states to freeze the negotiations with Turkey, he wants a clear mandate to discuss the issue with Ankara.